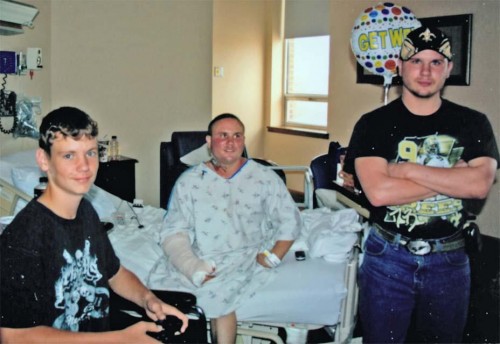 A month after being hit by a car, 19-year-old Deon Boudloche of Raceland is unsure if he will ever walk correctly again.

“Every day is an uphill battle for him,” she said. “We had to take him back to the emergency room so they could remove the stitches in his arm,” she said. “It appeared that the stitches were getting infected. It was causing him to hurt real bad.”

Houma native Talesha Cooley, 25, is charged with hitting Boudloche while he rode his bicycle on Louisiana Highway 182 on Sept. 2.

Cooley, driving a Chevrolet Impala, hit him at an undetermined speed, Louisiana State Police spokesman Gilbert Dardar said. The impact catapulted Boudloche nearly 80 feet from the point of impact into the parking lot of the Good Samaritan Thrift Shop.

According to hospital records, Boudloche suffered a broken right arm, broken left leg, damaged tendons in his right leg and cracked vertebrae, among other injuries.

To repair the fractures in his legs and arms, he underwent two surgeries, which required four pints of blood during the surgeries, according to his mother.

As a way not to deplete the United Blood Services’ supply, which supplies blood to Thibodaux Regional Medical Center, the family hosted a blood drive in his honor.

The drive was held at Central Lafourche Fire Station No. 1 on Sept. 12, where he volunteers. Brown said the event was a success, collecting 19.5 pints of blood.

“Everything went well,” she said. “People were glad to donate blood to help Deon out. It’s amazing the support we have gotten from the community.”

Recovering from his surgeries, Boudloche spent his days in the hospital watching television and hanging out with his siblings, identical twin Wyatt Detillier (the twins were raised separately) and little brother Kwen Lanegrasse.

However, home is where he wanted to be. He was released from Thibodaux Regional Medical Center on Sept. 16.

At home, Brown said Boudloche is in high spirits, but is in a tremendous amount of pain. However, he remains optimistic about the whole incident.

“I know the recovery will be hard, but I am ready for it,” Boudloche said.

Boudloche is ready to get back to school where he was in the process of earning his General Equivalency Diploma at the TOPS Central Adult Education School behind Central Lafourche High School.

He’s also ready to get back on his bike that, before the accident, took him anywhere he wanted to go.

“You just can’t give up something you love to do,” he said. “I’m going to get back on my bike. I’m not scared to. If I can ride again, I am going to ride my bike. Hopefully, nothing like this happens again. People should be more careful on the road.”

Cooley, of 162D Dupre St. in Houma, fled the scene of the accident, according to state police reports.

Lafourche Parish Sheriff’s deputy Sgt. Trent Duplantis happened to be traveling toward Raceland on Highway 182 when he clocked Cooley traveling 87 miles per hour in a 45 mph zone.

The report states that Duplantis witnessed Cooley passing another vehicle on the shoulder of the road.

Shortly after stopping Cooley, Duplantis found out about the hit-and-run and returned her to the scene, placing her into the custody of Louisiana State Police.

Dardar said while interviewing Cooley, detectives found that she was wanted for failing to appear in court on an unrelated charge of reckless operation of a vehicle.

Cooley remains in the Lafourche Parish Detention Center charged with felony hit-and-run, improper lane usage and driver’s license not on person. Her bond is $10,500.

Dardar said bicyclists being hit by cars are not common in the Houma-Thibodaux area. He said statistics show that the area had two bicycle accidents in 2007 and 2008.

Despite the accident, Boudloche said he has forgiven Cooley.

“I don’t think she meant to hit me,” he said. “Maybe she was in a rush, I don’t know. But I hope she learns her lesson.”

Brown said she has also forgiven Cooley. However, she can’t understand why the 25-year-old fled from the scene, instead of calling someone for help.

“But, that’s not my focus right now,” she said. “My focus is on my son and his recovery.”

“If I can trade places with him, I would in a heartbeat,” she added. “It’s so hard watching your child lay there in pain when you know he should be out there running around and doing the things that young men his age do.”

The accident has been hard on Boudloche’s identical twin, Detillier. The two hang out together all the time, he said.

Right now, Detillier said all he does is pray for his brother’s recovery.

“I feel like I am missing a part of me,” Detillier said. “He’s my brother. He’s my best friend. Being at home without him is not the same. But, he will be able to come home and I know we will be back to the way we were in no time.

“My brother’s going to walk again, I can feel it,” Detillier said emphatically.

A car hit Deon Boudloche of Raceland while he was riding his bike along Highway 182 in Raceland on Sept. 2. Boudloche spent time recovering at Thibodaux Regional Medical Center with his siblings, identical twin Wyatt Detillier and little brother Kwen Lanegrasse. * Photo by SOPHIA RUFFIN