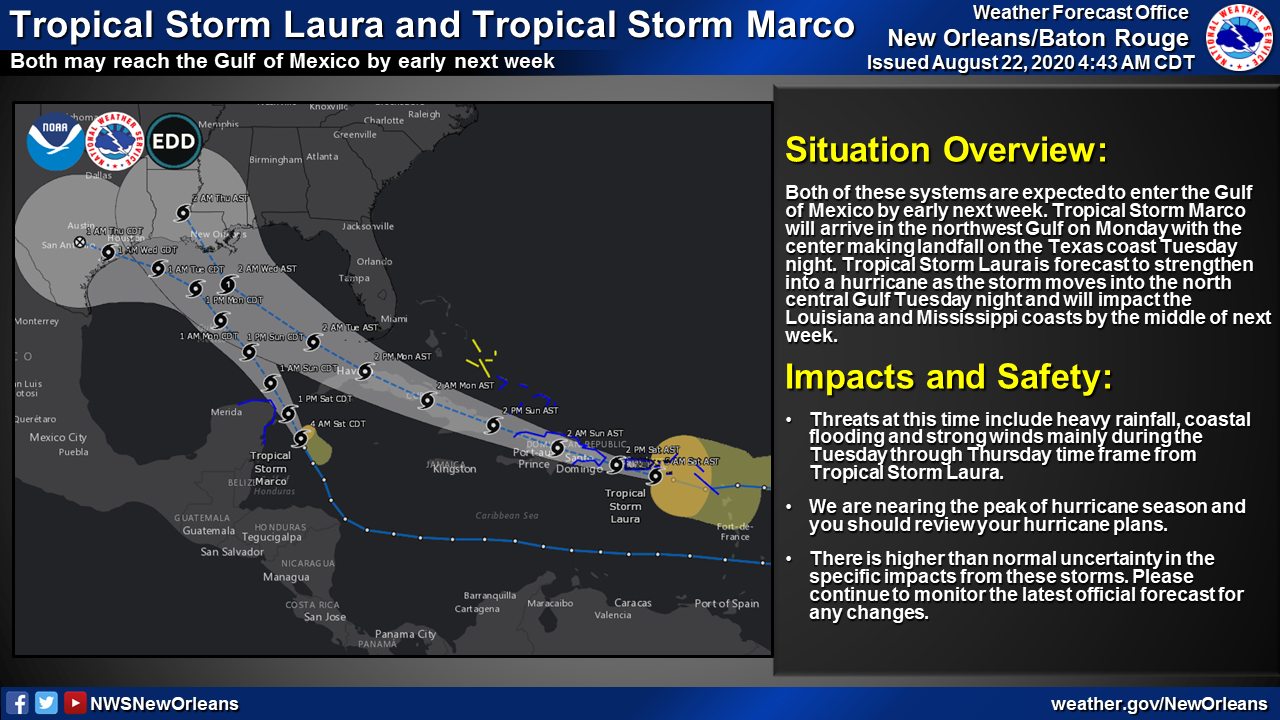 Tropical Storm Marco, which strengthened into a tropical storm last night around 10pm, will arrive in the northwest Gulf of Mexico at earliest on Sunday night and into Monday. Tropical Storm Laura is expected to move into the north central Gulf as a hurricane late Tuesday. The track of Laura has been nudged west slightly, however impacts to southeast Louisiana and south Mississippi remain about the same with threats including heavy rainfall, potentially strong wind gusts and elevated tides and storm surge during the Monday through Thursday time frame. 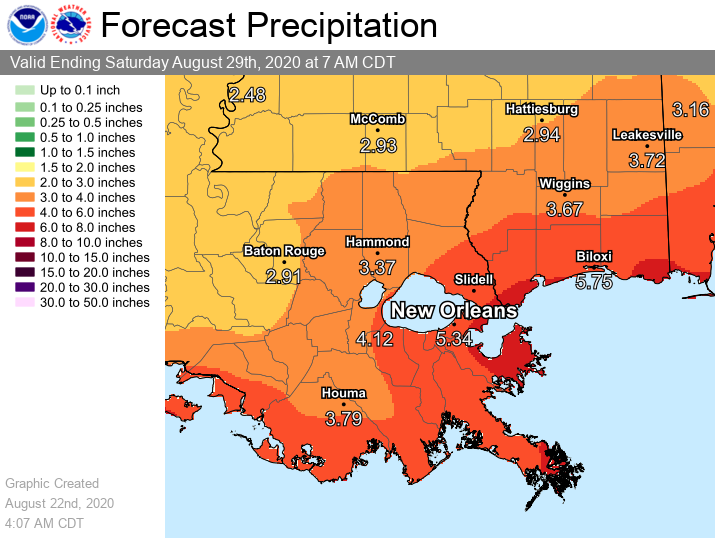 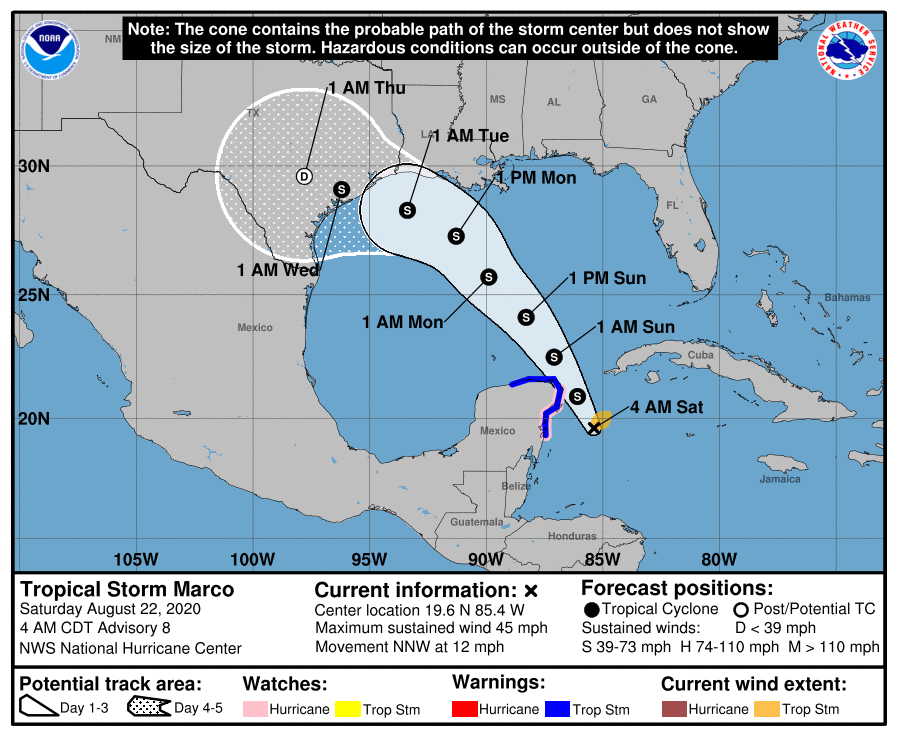 Maximum sustained winds are near 45 mph (75 km/h) with higher gusts. Tropical-storm-force winds extend outward up to 70 miles (110 km) from the center. Additional strengthening is forecast during the next couple of days as the system approaches the Yucatan peninsula and Marco could be near hurricane strength when it moves over the central Gulf of Mexico Sunday night and early Monday. 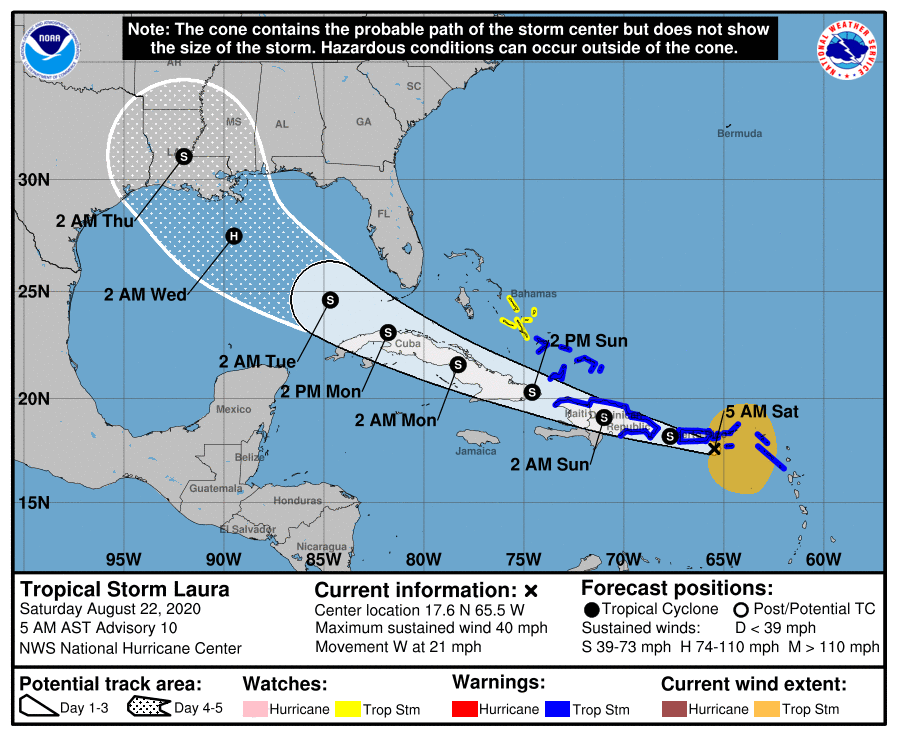 At 5 a.m. AST, the center of Tropical Storm Laura was located over the Atlantic Ocean about 70 miles (110 km) southeast of San Juan, Puerto Rico. It’s moving toward the west near 21 mph (33 km/h) and a generally west-northwestward motion is expected over the next few days. On the forecast track, the center of Laura will move near or over portions of the Virgin Islands and Puerto Rico this morning, near or over Hispaniola this afternoon and tonight, and near or over eastern Cuba Sunday and Sunday night.

Maximum sustained winds are near 40 mph (65 km/h) with higher gusts. Tropical-storm-force winds extend outward up to 205 miles (335 km) mainly to the north of the center. Slow strengthening is expected to take place during the next few days.

The details of the long-range track and intensity forecasts remain more uncertain than usual since Laura is forecast to move near or over portions of the Greater Antilles through Monday. However, Laura could bring storm surge, rainfall, and wind impacts to portions of Cuba, the Bahamas, and Florida early next week and the northern U.S. Gulf Coast by the middle of next week.