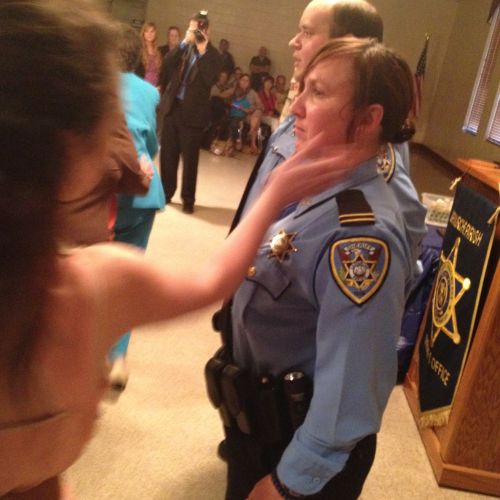 It was one of those nights that will be remembered by all who were there, a graduation from the police academy operated by the Lafourche Parish Sheriff’s Office which was held Thursday night.

The graduations are somewhat routine, in the sense that they happen often, because the academy does not stop teaching current and soon-to-be law enforcement officers, not just from Lafourche but other jurisdictions as well.

Each graduate has a story to tell; they all have relatives who are proud, and proudest of all is Sheriff Craig Webre, who puts a lot of stock in this training program which is credited with professionalizing the law enforcement that local departments deliver.

But last week one graduate in particular had a special story.

Maia Basas is 39 years old, and has found her calling, as a surprisingly high number of local officers do, late in life. Some come after raising young children; others who have worked in varying careers feel it’s time for a change, and have a desire to serve their neighbors by keeping them safe.

It’s been a tough couple of years for Maia. Not so long ago she lost her beloved grandmother, Dorothy Robichaux, and gave a eulogy for the woman so stunning in its eloquence that if you were there, you would have wished to be dead too just so that someone would talk about you as well as Maia did her grandma.

I know the family and was there, so this isn’t from third-party sources.

Maia’s mother, Carla Robichaux, did the badge pinning and that helped ease the pain. If Miss Dorothy were there the two would have done it together.

“This has been difficult, knowing my dear sweet grandma couldn’t be there to pin my badge,” Maia said, referring to a time-honored tradition of loved ones performing that task.

Maia got to speak at the graduation on behalf of her class, about duty and honor and all of those things so important to those who are now ready to serve and protect.

Maia has actually worn a badge for some years, as a reserve deputy. But being POST-certified means that she can now work full-time doing what she has come to love.

So Thursday night there were the graduates, and the solemn color guard, and the singing of the national anthem and the reading of the names.

And there as somebody else Maia would have wanted to see there too, but geography prevented this from happening.

Julio Basas is her husband, and he is a living reminder that there is work being done in Iraq by Americans that continues.

Julio is not in the military but works for a private contractor. He is involved with something called FMS, which for the uninitiated, which I was until 20 minutes ago, stands for foreign military sales.

One would presume he is selling things to the Iraq military, then.

Between the two of them Maia and Julio are raising children ages 17, 19, 20 and 24, which means it has mostly been Maia doing the raising, what with Julio out of the country.

But technology was prepared to deliver something special.

As Maia gave her speech, as she received her badge, as she experienced one of the most solemn occasions in her life, Julio was watching via an application called Ooovoo, using her cell phone.

“It was so emotional for me to see his face that I actually couldn’t talk to him at first,” Maia said of her husband. “I didn’t want to cry.”

It’s been a long haul for Maia, but the fact that Julio could attend via long distance was a big pay-off.

“The look on his face showed me this I all worth it,” she said. “Julio has been my rock. Every time I felt I couldn’t make it he would say ‘it’s all cake baby, you got this.’ He defiantly kept me moving.”

Josie Basas touches the face of her mother, Maia Basas, as Maia graduates from the POST academy at the Lafourche Parish Sheriff’s Office Friday night.