Entergy: Over 2,200 without power in Houma

It’s 1987. The Louisiana DOTD is in construction of perhaps the most transformative public works project in Terrebonne history: a modern five-lane extension of Tunnel Boulevard later known as Martin Luther King Boulevard. A complete afterthought is it just so happens to meander through the uninhabited swamps and cane fields of mostly one single recreation district formed years earlier.

Recreation District 2/3 is the most heavily subsidized district from commercial development, approximately $1,051,771—about 65% of the total budget– according to the Assessor’s Office. Much of this figure comes from dozens of faceless, non-voting national corporations along MLK Blvd. that do not utilize any recreation resource whatsoever. For example, this year alone, Target pays $8,134, Wal-Mart pays $13,229, Home Depot pays $8,725, and Lowe’s pays $12,447.

Some people delight in that Rec 2/3 has the lowest millage in the parish at 5 mills. Frankly, most of the eleven recreation districts in Terrebonne could be at 5 mills if they received the “MLK Blvd. Subsidy” every year!

This subsidy drives to the heart of efforts to thwart modernizing recreation in our parish, invoking a philosophical debate on conservative values.

On one hand, it’s indisputable some degree of reorganizing the districts would result in better stewardship of taxpayer funds: less duplication of costs, better economies of scale, and less potential for waste, fraud, and abuse. As such, it would mean less taxes need to be collected to fund recreation. It would lower property taxes for tens of thousands of residents. These all sound like pillars of conservatism.

On the other hand, it would require residents of Rec 2/3 to divide the unearned “MLK Blvd. Subsidy” with more residents across the parish who also spend their taxpayer money at these businesses. Even though the parish would be collecting less money in taxes and have less bureaucracy, there exists the potential for a slight millage increase for residents of Rec 2/3. In an alternative interpretation of conservatism, that is a deal breaker.

If we are to apply this same standard of conservatism to national legislation, then logically, we should be opposed to the Republican-led “Tax Cut and Jobs Act of 2017.” It resulted in historic tax cuts, triggered economic growth, and fostered smaller government, but unfortunately, there was a segment of the population that received a nominal tax increase due to losing deductions and subsidies.

Look at neighbors on Savanne Road: one on the Rec 2/3 side of the line pays 5 mills, and the other on the Rec 9 side pays 15 mills. In large part because the Bayou Black area has little commercial development, residents must pay a significantly higher millage rate to offer comparable facilities. Rec 9 will only assess $224,759 to commercial interests, or less than 25% of Rec 2/3. It might take an entire residential subdivision to equal the tax revenue of just one of the big box retailers.

The razor-thin margin of the Rec 2/3 millage renewal cannot be viewed as great public confidence in the current system by any reasonable person. The mission of the Recreation Modernization Task Force has never been to influence this renewal. Rather, it is to explore numerous systemic issues such as this “MLK Blvd. Subsidy” and offer a long-term vision that benefits all residents of Terrebonne fairly. 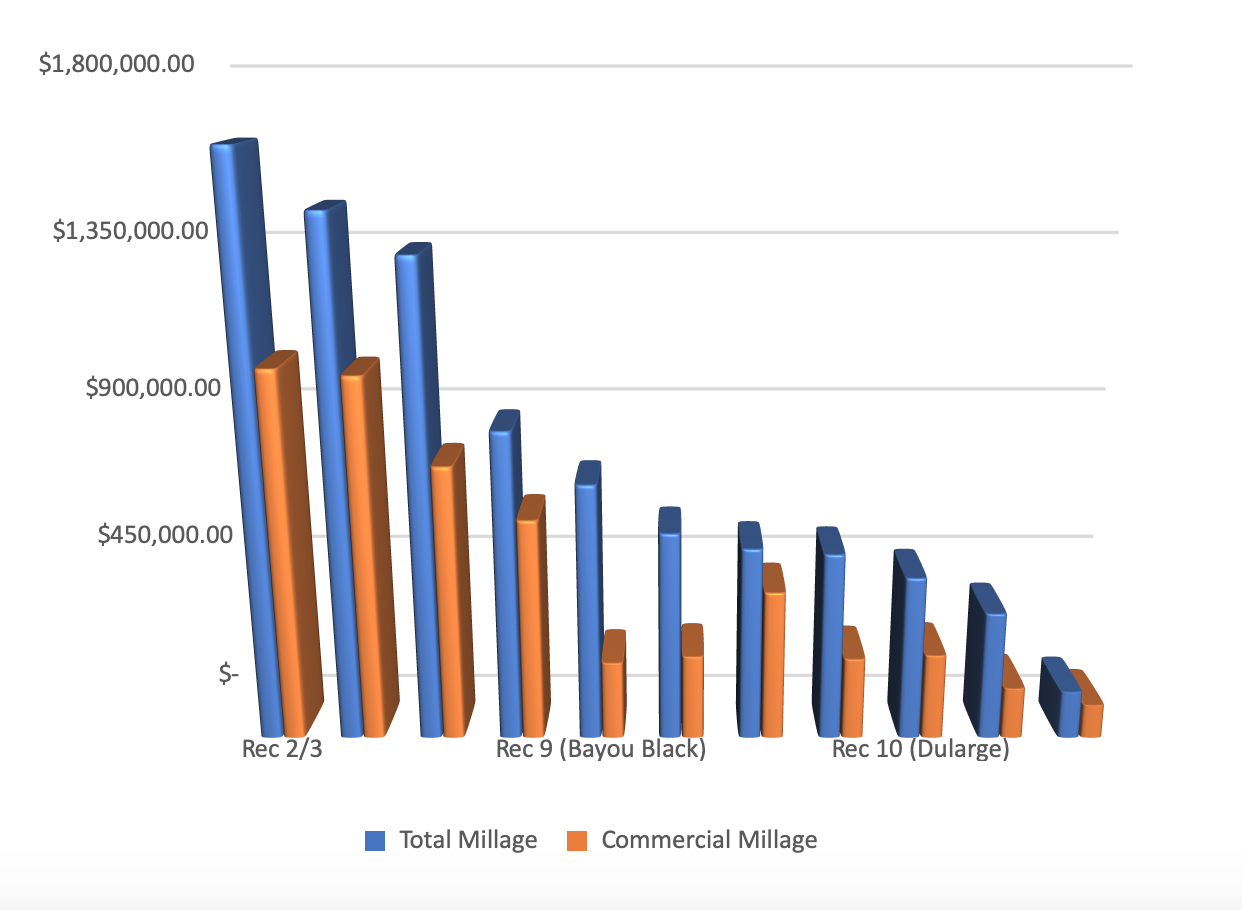