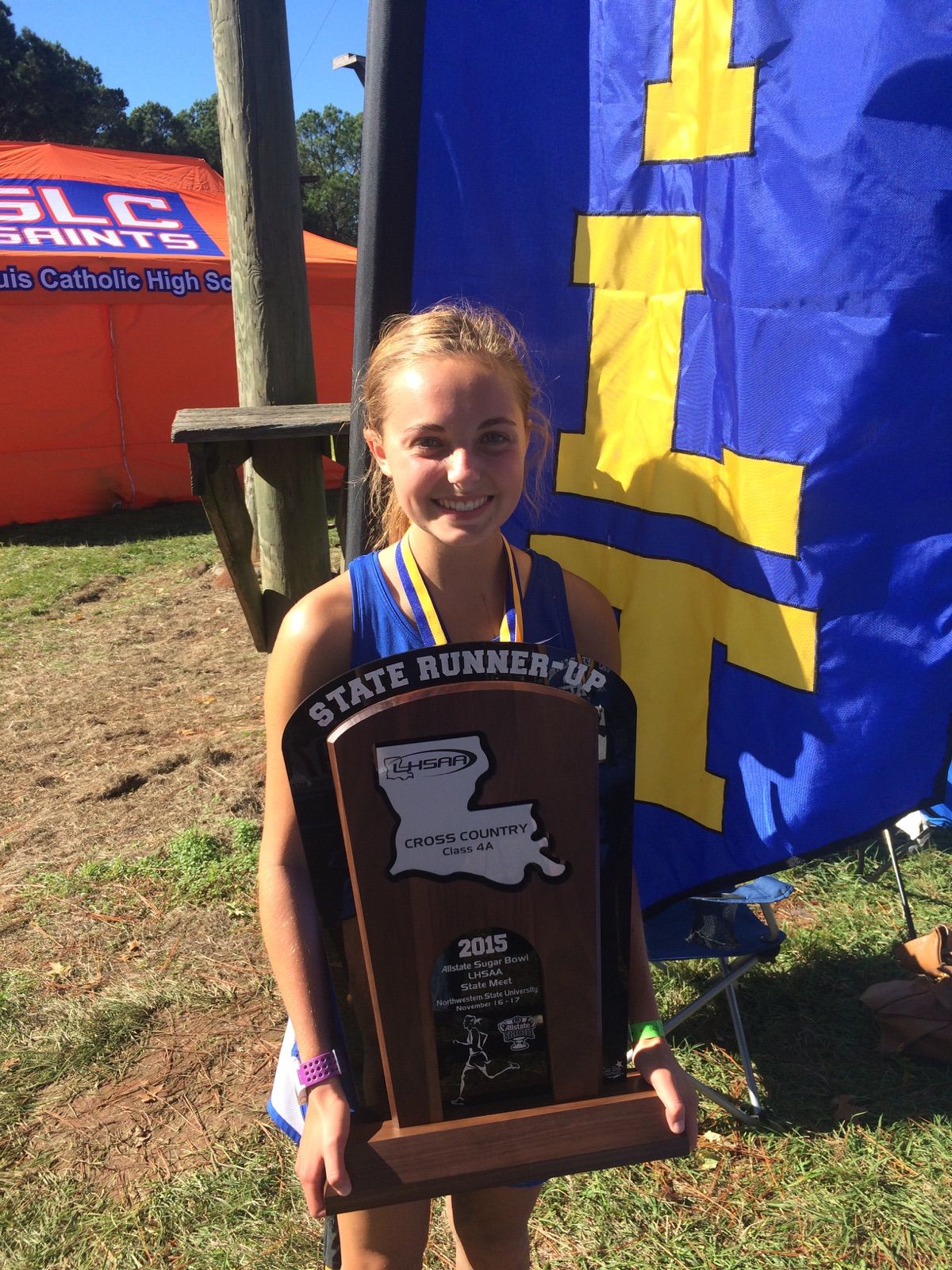 For the second straight season, she is a cross country state champion.

Breaux officially made it back-to-back in the Class 4A State Cross Country Meet last Wednesday, scoring her second straight state title with a 3-mile run of 20:08, enough to pass Lakeshore sophomore Haley Dean and Carencro sophomore Chantaya Griffin, who finished second and third, respectively. Breaux said this year’s win is one that she’s grateful for and will never forget. She said that going out on top is something that provides a warmth that can’t be measured.

“Winning state two years in a row is really special and unbelievable,” Breaux said. “It’s such a good feeling to know that everything I put into running is all worth it. It’s also really special that I was able to win my last cross country race with my teammates by my side. I couldn’t have done it without their support, the support of my parents and the support of (Vandebilt cross country coach Dave) Malone.”

Tuesday evening rainshowers, which lasted through Wednesday morning proved problematic for racers, because the track was still soaked on the day of the race.

Breaux said the conditions at Northwestern State University’s cross country course were putrid and proved difficult for her to contend with.

“The conditions were definitely the worst they have ever been in my five years of racing on the state course,” she said. “During the whole race, we had to battle the mud and water, which made it really hard to run.”

The competition wasn’t half bad, either.

Breaux rushed out to the front of the pack early on, running the first mile of the race in 6:25 – just a second and a half slower than Griffin, who set the pace in the opening third of the day.

By the 2-mile marker, Breaux was still in second, but was chasing a different adversary. She caught Griffin, but trailed St. Michael junior Rachel Pendleton, who ran the first two miles in 13:11 – two seconds quicker than Breaux’s 13:13.

But in the last mile, Breaux raced like a champion.

She quickly surged past Pendleton and into the lead. Once she had the lead, Breaux didn’t let up and held off both Dean and Griffin in the final stretch, outlasting both by just north of five seconds. Pendleton finished fourth – 11 seconds off the pace.

Breaux said when she crossed the finish line, her body was overtaken with joy. Her first-place finish helped propel Vandebilt to win runner-up as a team at the meet – something she said she’s almost as proud of as the individual title itself. St. Michael won the title.

“Crossing the finish line, I honestly couldn’t believe that I had done it again,” Breaux said. “I’ve worked so hard since the summer for this moment and accomplishing my goal made it all worth it.

“It feels amazing to be the runner-up team again, as well. We have really grown as a team this year and trained really hard together. I know that everyone ran their hearts out and gave it their all.”

While the Vandebilt girls missed the team title by a smidge, the E.D. White boys didn’t.

The Cardinals used a total team effort to score the points necessary to be the top dogs in Class 3A.

Points are calculated in cross country by adding the finishing position of everyone on a team, which makes a lower score better in terms of the competition.

The top five finishers for each team are counted toward the tally, though seven runners are allowed to compete for a given team.

The victory was the first for the E.D. White boys since 2012. They’d been close the past few seasons, but finished as the state runner-up.

“We put in the work and we wanted to make sure that we got it done this year,” Cardinals senior Stephen Boudreaux said. “To win the title as a senior means a lot to me and our whole team.”

Boudreaux was one of the key cogs in the win.

The senior runner finished as the meet’s individual runner-up – one of three Cardinals who finished in the race’s Top 10.

“I felt good today,” Boudreaux said. “I ran my race and I was glad to help my team.”

E.D. White got help in other areas, as well. Seven Cardinals runners placed in the Top 16 of the race, which made it an absolute no-brainer that E.D. White was the most dominant team in the field.

In addition to Boudreaux, the Cardinals also benefitted from junior Lucas Marcello, who finished sixth and sophomore Race Bourgeois, who was ninth.

Ian Coats and Zachary Robichaux rounded on the team’s scoring with 12th and 14th-place finishes, respectively. •