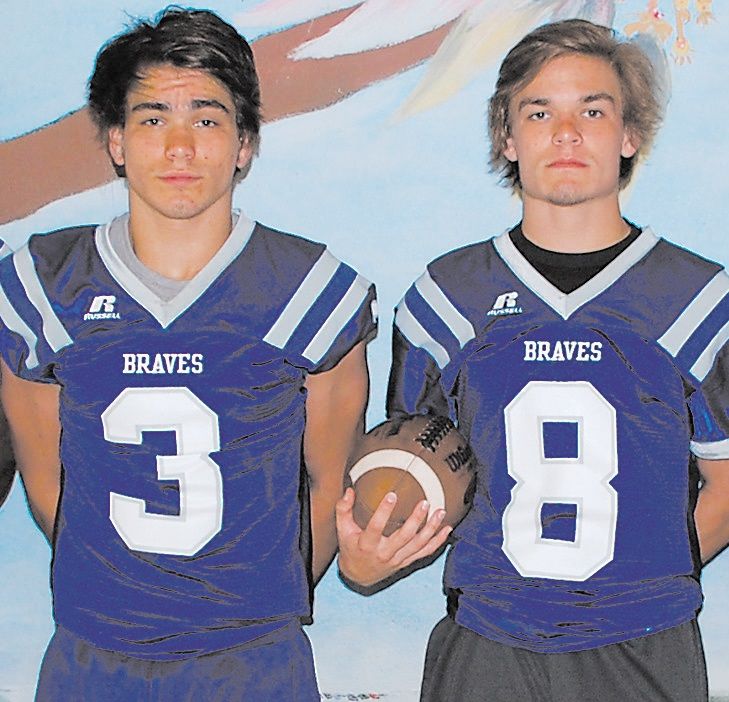 It’s not easy to be a first-year starting quarterback in Louisiana Class 5A prep football.

But when you’re going through that always-tough first season with your big brother by your side, the growing pains are so much easier to endure.

The H.L. Bourgeois football team’s new-found success is one of the feel-good stories in the Houma-Thibodaux area. The Braves started the season with two-straight wins and seem poised to have their most successful season since the mid-2000s under first-year coach Carey Melvin.

But what makes the story even more unique is the chemistry in the team’s backfield. The Braves are breaking in a new quarterback – junior Jude LeCompte. What’s made the transition easier than normal is the fact that Jude’s older brother Blaise LeCompte is one of the team’s primary running backs.

The brothers said that playing with one another is the college thing in the world. They believe that their natural-born unity is going a long way toward creating a brotherhood among the entire locker room of players at H.L. Bourgeois.

“It’s awesome to be able to get the chance to take the field with my brother on Friday nights,” Blaise said. “I’m older, so I try and do what I can to give Jude help our guidance when he needs it at practice or whatever. But that doesn’t happen often, because he’s a good player and a good leader. I believe in him, and I know our teammates do, too.”

“Having (Blaise) with me is a huge advantage,” Jude added. “It’s all instinct. We’ve played together our whole lives. I know where he is at all times and he knows where I am. When I get to hand him the ball and he scores a touchdown or whatever, it’s like a feeling of double excitement because our team scored, but my brother also scored, as well. It’s a great feeling.”

Great feelings are becoming pretty common around the Braves locker room these days.

The LeCompte brothers have a lot to do with that.

Melvin said in preseason camp that he didn’t have any concerns about naming Jude LeCompte his starting quarterback – even if the junior hadn’t had much varsity experience at the position prior to this season.

The coach said he knew Jude would be a success because of his poise and his “incredible athleticism.”

“Jude is such a great athlete,” Melvin said. “He’s a natural-born playmaker who commands the huddle and does a good job running the offense. We’re excited about all of the skills that he brings to our team.”

The older brother isn’t too shabby, either.

The Braves utilize a run-heavy spread offense, which means that the Braves often ask the quarterback to read defenses and make the decision on the fly to either run, hand the ball to his brother or hand it to someone else.

“When given the option, he always hands it to his brother,” Melvin said with a laugh. “That’s me joking, obviously, but their chemistry is noticeable on the field.”

When Blaise has the ball, he’s an elusive runner that possesses both speed and the ability to run for power. Against Ellender, the brother muscled in a 2-point conversion. Against the Gators, he scored two touchdowns to go along with the two his little brother scored.

When Blaise didn’t score on that night, he set up Jude to have success. On the first play from scrimmage, Jude put the football into Blaise’s belly, then read the defense.

The defenders bit and played to contain the halfback sweep.

Seeing it clearly, Jude pulled the ball away from his brother at the last second, faked the handoff and then rushed 76 yards up the middle for a touchdown.

“They were terrific,” Melvin said of the brothers. “Both of them played a great game.”

“We feed off of each other out there,” Jude said. “When he’s fired up, it gets me rolling and it gets everyone in the huddle going, as well. We’re trying to change things around, and we’re all brothers – it’s not just me and Blaise. Everyone we have is brothers with everyone else, as well.”

The Braves are red-hot and are trying to erase the past decade, which was filled with losing seasons.

Everyone admits that there’s a lot of work to be done for all of the team’s goals to be accomplished, but it sure looks like things are headed in the right direction.

With two brothers in the backfield making plays and an inspired roster surrounding them, all is well in Gray, and the Braves have suddenly ascended from pretender to contender overnight.