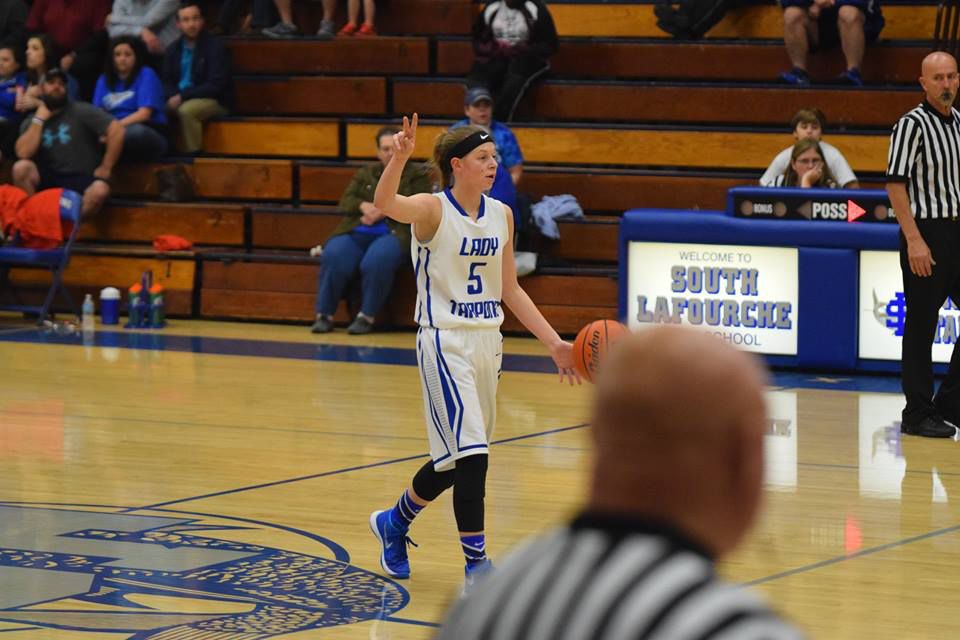 How could they not? She’s been among the top rising stars in the area for almost a half-decade.

But now, Bruce is being offered an opportunity to showcase her basketball talents to a global audience.

Bruce was recently selected to be part of the 2017 Down Under Sports Hoops Classic – a prestigious basketball tour that takes some of the most gifted players in the country to Australia to showcase themselves in front of college coaches and scouts who are searching for talent.

The trip will take place in July, and Bruce will represent Louisiana as a member of the Central Conference Girls’ Basketball Team – one of several American teams who will make the trip.

She said the opportunity is exciting, and she can’t wait to play against and with some of the top players in the country in the land down under.

“I am very excited to go and play in Australia,” Bruce said. “It will give me a chance to improve my game and pick up skills I may never have seen before. It will also give me the opportunity to see what it’s like playing for coaches and players I have never met and know nothing about. It’s exciting. I’m happy for the opportunity.”

It was an opportunity that came through hard work, dedication and perseverance.

Bruce said she’s not sure how she was nominated for the program, but she knows it happened sometime during the past summer.

The Lady Tarpons travel to several camps every summer, and she impressed a scout enough to earn the nomination.

While competing on the trip, Bruce will get exposure and will be able to showcase herself to several college coaches and scouts – an opportunity that she hopes will yield enhanced collegiate interest and scholarship offers.

“A few weeks ago, my coach got a letter in her mail at school about the trip,” Bruce said. “Then, it was official.”

Bruce said she’s worked extra hard over the summer to work on her game. She said for her, there’s really no offseason. She plays basketball year-round, which makes the chance to go to Australia over the summer even more exciting.

“I play AAU so a lot of the summer for me was spent traveling,” Bruce said. “But I still worked on my game. I worked on my shooting, my ball handling, my free throws and strengthening my body. Pretty much, I’ve been working on everything.”

But while working on her game on the floor, off it, she’s been working to make her trip a reality. Bruce will have for her trip, and if she can raise $1,000 in a 30-day period, her trip will be heavily discounted.

This past weekend, she sold sweets at South Lafourche Biddy Basketball games. She’s also currently selling half-and-half raffle tickets, and even has plans to maybe host a small basketball tournament to get the help.

Bruce’s mother Celaya said the support the community has shown to her daughter is heart-warming.

Business at Traya’s sweet stand throughout the weekend was brisk, and she made a huge dent toward her goal.

“It’s an awesome feeling to know that so many people are behind your child to help with a wonderful opportunity,” she said.

For Bruce, the path to basketball prowess has been started virtually since birth.

As a youngster, Bruce was always a top-tier Biddy Basketball player – a multi-time All-American performer, who was always regarded as one of the better players in her given age group. The peak of Bruce’s youth basketball career came in 2013 when she was a leading member of a World Championship for South Lafourche Biddy Basketball. Bruce was the team’s starting point guard, and arguably its top player. She was named Ms. Biddy for the 2013 season – an honor only a handful of locals has ever been given.

After that success, Bruce also helped lead Larose-Cut Off Middle School to a first-place title at the Multi-State Middle School Championship Tournament – the first-time the school had ever achieved that honor. In the prestigious event, Bruce was named MVP.

“Traya is a special player that every coach really would love to have,” said Jason LeBoeuf, Traya’s coach in Biddy and at LCO. “She’s used to playing in big games. … She’s one of those players that finds a way to play her best when the stage is as big as it can be.”

But since those early days, Bruce’s game has continued to evolve, and she’s now among the top players in Louisiana for the Class of 2018.

Bruce has started since her freshman season for the South Lafourche girls’ basketball team and she’s been a leading scorer for the team since arriving on campus. Last season as a sophomore, Bruce took the next step forward in her progression and she won the District 7-4A MVP award – while helping lead her team to the Second Round of the Class 4A State Playoffs.

Lady Tarpons coach Rainie Terrebonne said Bruce is a pleasure to coach – a player who can do literally anything on the court.

“The things she can do really just make you say, ‘Wow,’ sometimes,” Terrebonne said last season. “She’s a terrific player, but she’s also a really good kid. She’s a good teammate, and she always has a good attitude and a good work ethic. She always is willing to get better and help our team.”

Bruce said she’s excited to make the trip to Australia, but her No. 1 focus for the time being is on her role as a leader with the Lady Tarpons.

She said practices are going smooth so far this preseason, and her No. 1 goal is to help lead the Lady Tarpons to the highest level – just like she did in Biddy and in middle school.

“My main goal for this season is to get my team past the second round of the playoffs, because two years in a row, we have lost in that second-round game,” Bruce said. “But for me, the ultimate accomplishment would be to get that state championship. That’s what I strive for every year.”

To make a donation to Bruce for the Australia trip or to buy a half-and-half ticket, contact her mother Celaya Bruce via e-mail at celayabruce@viscom.net.