New faces ready to make their mark at Patterson

Ellender seniors want the losing to stop in 2012 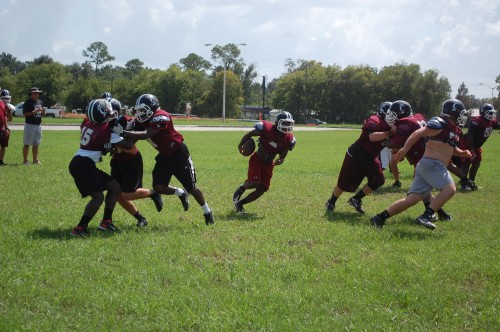 Covenant Christian Academy has heard all of the gripes time and time again.

“We don’t play nobody – the league we were in is garbage,” quarterback Mark George said imitating the team’s nay-sayers. “We’ve heard everything that they can possibly say.”

This year, the Lions have a chance to prove their critics wrong.

And they can’t wait to get started.

After two-straight state championship seasons in the Louisiana Christian School Athletic Association, Covenant Christian has made the jump to the LHSAA and will compete in Class 1A.

With a chance to face some of its naysayers, the Lions tout that they are anxious to show that their success is no fluke and that they are a legitimate competitor in the local athletic realm.

“We really want to win some games and silence all of this noise that we’ve been hearing in the past couple of years,” senior offensive lineman Chris Lirette said. “Everybody took every chance they had to say that we were weak because we were in the Christian league. Now it’s time to find out if they are right. We have a chance to silence it all.”

Athlete-for-athlete, the Lions look like they can play with anybody.

Leading the team’s offensive push will be arguably the team’s best athlete, George, who has rushed for more than 1,000 yards in each of the past two seasons.

CCA coach Blyght Wunstell said the team will go as far as George takes it offensively.

“The last two years having over 2,500 yards while playing half of our ballgames – there’s no question what he can do,” Wunstell said. “It’s all going to start with him. He’s going to be the motor of our offense.”

Joining George in the team’s spread offense will be Lenard Calloway – a player Wunstell said can be explosive.

“Anytime he touches the ball, he can score,” the coach said.

On defense, the Lions will return most of its defensive line.

Big, hefty defensive tackle Sean Richardson and Lirette lead a talented and experienced defensive line that will look to keep opponents off the field.

Richardson said he believes the unit is up to the challenge.

“We’ve got a lot of size and a lot of experience,” he said. “I think we’re going to have a lot of success and we’re really going to show people what we’re made of.”

One of the team’s linebackers agrees and said he thinks the Lions’ defense will be as good as it’s ever been.

“I think this is the best defense we’ve had since the start of the program,” senior linebacker Bryce LaFont said.

It will not take long for CCA to find out where they stand among the elite of the LHSAA.

In the school’s first-ever LHSAA game, the Lions will travel to take on perennial power Brother Martin.

That game will be the ultimate David versus Goliath matchup on paper – but that’s not necessarily a problem to the Lions.

“We have absolutely nothing to lose,” Wunstell said. “No one expects us to win. Heck, no one really even expects us to go and lose close. … Athlete-wise, I think we can matchup with them. But the test will be whether or not we have the depth to play four quarters with them.”

“We can’t make the playoffs this year, so I guess you can say that’s our playoff game,” Lirette said. “We’re excited to play them.”

No matter how CCA’s 2012 season goes in the win/loss column, the team will not contend for a championship.

Like every other first-year member, the LHSAA will not allow the Lions to compete for postseason honors in its first season – even though its opponents will earn power points against the Lions.

Wunstell said that is the only downside of the team’s jump to Class 1A.

The coach added that he held a meeting with the team’s seniors before making the decision to ask whether they supported the move.

“It was unanimous,” Wunstell said.

Richardson said it was an easy decision.

“We want to be able to come back here someday for playoff games and know that we started something,” he said. “To make the jump, one class had to sit out a year of playoffs. We wanted to be the ones to get it rolling.”

Sure, the Lions may not get that ring – but they have a chance to get bragging rights in the face of their critics.

Make no mistake about it – rookies or no rookies – they are playing to win.

“Our expectations are the same and our goals are the same,” Wunstell said. “We’re just thrilled to be a new member. Obviously, there will be some new challenges and stiffer competition, but that’s what athletics is about. That’s why as a coach, you coach. And that’s why as a player, you play.

“And as a team, I think this is going to be our best football team we’ve ever had here in our short three-year period.”

“Everyone out there has said different things about our team in the past few years,” Lirette agreed. “Every chance they’ve had, they said something to try and discount the things that we’ve done. Now, we have an opportunity to go out and silence people and show them that we can do some great things, too.”