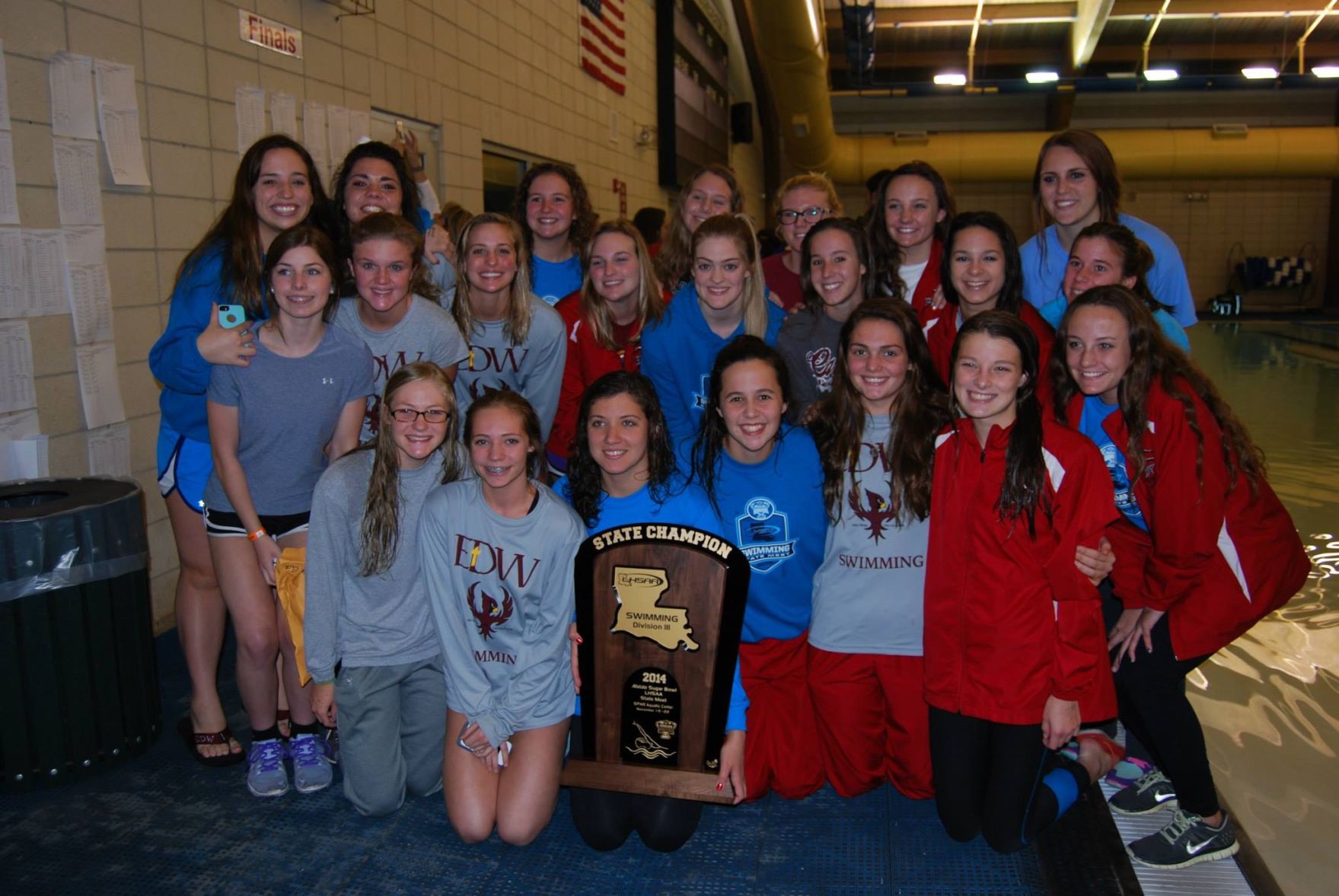 This year, it was the girls’ turn.

The victory was the second in the past half-decade for the E.D. White ladies, who finished as a runner-up in 2013.

“I was paying attention to the points during the entire meet, and I enjoyed watching us continue to increase the point difference between us and other schools with each passing race,” E.D. White swimming coach Christina Lasserre said. “I knew without a doubt as we went into the 400 free relay that the girls were going to take home the state title, and it was an incredible feeling. These girls put their hearts into the season and gave it everything they could. I was extremely proud of every single one of them.

“The girls were joyous, and many expressed their emotions through tears of joy and squeals of excitement when they called it out and made it official – ‘Your 2014 LHSAA Division III State Champion is E.D. White Catholic High School.’”

For the Lady Cardinals, a depth of talent put them over the top. E.D. White scored favorably in countless races throughout the meet, chalking up points in all stages of the meet to add to the team’s tally.

Lasserre said she had an inkling early in the season that this group could be special, but she credited the kids involved for putting forward the hard work and dedication to make it all possible.

Lasserre said the team’s runner-up finish in 2013 was a big source of the team’s motivation for more this time around.

“At the beginning of the season, I knew we were going to have fun,” the coach said. “We had a large team complete with great kids this year. Several new eighth and ninth graders joined us, and we always had a strong team back from last year with the boys capturing the 2013 State Championship and the girls being the runners-up. These kids were willing to work hard from day one and they never lost sight of their goals.”

When asked to name some of the team’s top swimmers, Lasserre quickly pointed out that doing so would be no easy task.

“We have so many to pick from,” she said with a smile.

Lucas also generated points for the Lady Cardinals in her individual events, finishing third in the 50-yard freestyle, fourth in the 100-yard freestyle and fifth as the anchor of the team’s 200-yard medley relay team.

In the longer distance races, senior Rachel Rathle scored for the Lady Cardinals, placing fourth in the 500-yard freestyle and fifth as a member of E.D. White’s 400-yard freestyle relay team.

“It is extremely difficult to just pick out a few (swimmers),” Lasserre said. “It was the work of the entire team that earned us the title for the girls. It feels wonderful to know that all of the hard work the kids put in this season was worth it.”

So for E.D. White, the focus will now shift to the future – one that appears to be very bright. Several of the Lady Cardinals’ top swimmers will return for another season, led by returnees like Lucas, Toups, Labat, St. Pierre and underclassman Harlee Smith.

But the team will also part with a talented senior class that included Rathle, Lauren Sylvest, Ashley Lucas, Chloe Hebert and Victoria Folse.

Lasserre said she smiles knowing that those kids were able to go out on top.

“We are going to miss this year’s senior group without a doubt,” the coach said. “They are a group of young people that have continued to lead by example throughout all of the years involved in the program. They had positive attitudes always and encouraged others to keep going and push through when practices got tough.”

The E.D. White boys’ team didn’t do too shabby, either.

The Cardinals failed to defend their Division III State Championship by just six points, finishing second in the state meet with 320 points. That mark was short of Lusher, who won this year’s state title.

But while the overall team was a few points short of its goal, a couple individuals took home some gold.

Junior Nicolas Rathle was one of those individuals, taking home four state championships in the afternoon – two on his own and two as a member of a Cardinals’ relay team.

In the 100-yard backstroke, Rathle won gold with a time of 55.43 seconds, enough to outlast the 59.56-second mark of St. Thomas Aquinas senior Mathew Hanford.

Rathle followed that up with another gold in the 200-yard individual medley, outlasting the competition in that event by 11.04 seconds.

He was also a member of the Cardinals’ successful 400-yard freestyle relay team and the 200-yard medley relay team, winning gold in both.

In the 200-yard medley relay, the margin was much closer, but Rathle, Danos, Soignet and freshman Sonny Charpentier combined to win the title.

Danos was also a four-gold participant, winning the two relays and also gold in the 50-yard freestyle and the 100-yard butterfly.

The E.D. White girls’ swimming team finished just short of the state championship a year ago. This time around, the Lady Cardinals were not going to be denied, using their great depth to glide past the competition at the Division III State Swimming Championship. The Cardinals scored 331 points in the meet, enough to outlast rival Vandebilt’s 274. Both the Lady Cardinals and Lady Terriers crowned individual champions in the meet.