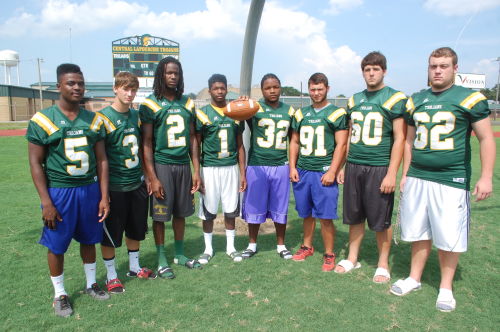 When Keith Menard makes his debut as Central Lafourche’s football coach on Sept. 6, he will be the Trojans’ fifth head coach in four years.

Bucking that trend and bringing stability to the program is the coach’s mission in his first year on the sidelines in Mathews.

After a storied career as a head coach throughout Louisiana, Menard said he relishes the opportunity of turning around Central Lafourche’s program and guiding the team to its first playoff appearance since the 2009 season.

“It’s kind of a tough sell to the kids because they’ve been listening to all of these different people talk to them since they’ve been on the campus,” Menard said. “But I can tell you that they’ve bought in tremendously and it’s been a very good deal for us here. We’re excited to get started and trying to bring this program back.”

Menard landed at Central Lafourche as a prized catch – he’s had success as a head coach throughout his career.

The new Trojans’ coach took Catholic-New Iberia into the second round of the playoffs last season – his third with the program.

Menard was also the 2008 LHSAA State Coach of the Year after leading Many High School to an 11-2 record.

He also has coached at Ville Platte, Central-Baton Rouge, Sacred Heart and Rayne.

The Trojans’ locker room seems to have bought into his pedigree and resume.

Those asked touted their excitement for the Menard era in Mathews.

“He’s picked up the intensity around here,” senior defensive lineman Garland Sylvester said. “He’s got us practicing and working out harder. He’s won before. We see and know that he knows what he’s doing. It’s up to us now to buy in and do the things that we need to do.”

One of the things the Trojans will “need to do” is learn a new offense.

Menard utilizes a pro-style offense. That scheme is different from the triple option attack that the team has used in years past.

That transition was supposed to be eased somewhat by the return of 2012 starting quarterback Luke Falgout.

But Falgout suffered a season-ending injury in the spring that has forced Menard to turn to an open competition between Austin Aucoin and Brader Dufrene, who also doubles as the team’s kicker and punter.

“Austin probably has a little bit of a lead right now,” Menard said. “But Brader has stepped up and has been solid. It will be interesting to see who actually wins it and who can do it.”

Whoever wins the job as the Trojans’ quarterback will lead an offense that returns four starters from last season.

“Offensively, it’s been a little bit of a challenge, but the kids are working hard every day to get the changes in and get it right,” Menard said.

Sylvester, Lagarde and Jarvis are all defensive linemen for Central Lafourche.

Having that much experience in the trenches is something the team considers to be a plus.

“I think we’ve been doing really good so far this summer,” Sylvester said. “We have some guys up front that have played before, and we also have some guys who are young and hungry trying to make their way into the lineup. It’s a good mix.”

No matter how the depth chart stacks out, it just seems like the Trojans’ successes or failures in 2013 will ride on how well the team responds to its new coach.

Pierce said he thinks Menard is the best coach he’s had in his career.

That’s saying a lot. A senior in the Trojans’ program has had quite a few.

“I just shot it to the kids straight,” Menard said. “I said, ‘Hey guys, look, you’ve had a bunch of different vacuum cleaner salesmen in here the past few years and they all had a different make and model of vacuum. Every salesman was good, so now it’s time for the kids to decide which one they want to buy. The only thing I can stress to them is that I am the last salesman here making my pitch. I’m the guy now. I’ve got 25 years experience to prove that my vacuum works. So hopefully the kids hear that and then make the decision to buy into the product that I’m selling. So far it’s been great. So far, they’ve done exactly what we’ve asked them to do.”

Members of the Central Lafourche senior class pose outside of the team’s stadium before practice. With new coach Keith Menard at the helm, the Trojans think they will be able to have a turnaround season in the Bayou District. Menard is the team’s fifth head coach in the past four seasons.