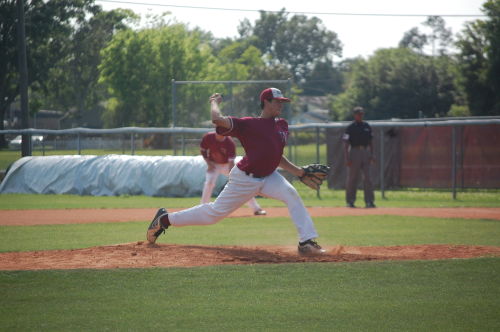 But Cardinals coach Shane Trosclair said his outgoing players may have done something better. The coach said they instilled a winning foundation into the program’s younger players, which E.D. White can carry forward into its future.

“What amazing leaders,” Trosclair said when asked about his senior class. “All eight are going to college and five are going to play college baseball. With this bunch, you have a lot of kids who had been starting since they were sophomores. These kids led by example with their work ethic. They worked hard every day, and our young guys saw that, and it made them better.

“That’s going to help us in the future. They helped to teach the younger guys what’s needed to field a ballclub capable of playing in and winning the biggest games of the season.”

Two of the eight Cardinals’ seniors call the pitcher’s mound their home.

Trosclair praised the work of aces Scott Szush and Payton Coddou for their contributions throughout this season.

The Cardinals’ one-two punch combined to go 22-2 on the season with Szush owning a sparkling 13-0 record.

The pitchers are both extending their careers beyond the Cardinals’ program. Szush has signed to continue his career at Southeastern Louisiana University. Coddou will also be in the Southland Conference – he inked at UNO.

“That’s the best two arms to come through E.D. White for a long, long time,” Trosclair said. “These two kids are going on to play Division I college baseball. At one point, they had 41 straight scoreless innings, and they were both outstanding leaders. Both of these kids threw a ton of strikes and they just let their defense play.

The Cardinals’ one-two punch stayed hot at the right time of the season, earning five shutouts in a row to push the team into a matchup in the Class 3A State Semifinals with Brusly.

“He pitched last year’s semifinals game and lost 2-1,” Trosclair said. “He didn’t want that to happen again. He took the ball and he said, ‘Coach, we’re going to the State Championship game.’ He was right. He delivered. That was a dominant performance, and he was outstanding for us in the semifinals, giving us another shutout.”

A day later, Coddou took the mound against Parkview Baptist in the finals and didn’t have quite as much luck, surrendering several runs in the opening innings of the game – part of an ambush that set the Cardinals back 9-0.

“That’s the thing about being a pitcher – you have your good days and your bad days,” Trosclair said. “And Payton had a rough day in the last game. But it doesn’t take anything away from the fact that he had an amazing season and an amazing career. He’s a huge part of the successes that we’ve had here.”

But while the pitchers get most of the headlines, Trosclair said the team’s hitters deserved some love, too.

The coach said this was the first season in his career with the Cardinals that E.D. White had an offensive lineup capable of scoring runs from the top of the order to the bottom.

Like with the pitchers, Trosclair said the success was mostly thanks to a bunch of seniors, including Logan Barbera, Brendon Gros, Nick Falgout, Jace Toups, Michael Waguespack and Brett Duet.

“Everyone was capable of producing and they all did their jobs,” Trosclair said. “If someone didn’t get the job done, there was never any pressure or any reason to worry, because our kids just knew that the next guy up was going to pick them up and get the job done. This bunch really loved each other, and they really took a lot of pride in picking up their teammates. No one wanted to let the other guy down.”

So with another successful season in the books and a slew of contributors exiting the program, one would think that E.D. White would take a step backward in 2014.

Trosclair said he doesn’t necessarily believe that’s going to be the case.

He said the team’s JV program hasn’t lost a game all season and the team has a group of young players ready to make their own mark.

The coach added that they also have something more valuable than experience – a few years watching and learning from one of the most successful senior classes in school history.

“This bunch coming up will know what it feels like to make it to and lose in the state championship game,” Trosclair said. “No one will want to experience that again – that’s for sure. The next time we get there, we will surely want to break through and win it.”

E.D. White pitcher Payton Coddou fires a pitch during a game this season. Coddou was a major cog in the team’s run to the LHSAA Class 3A State Finals.