Week 8 power rankings: Where does YOUR team stand?

The grades are in: Giving Nicholls football their marks 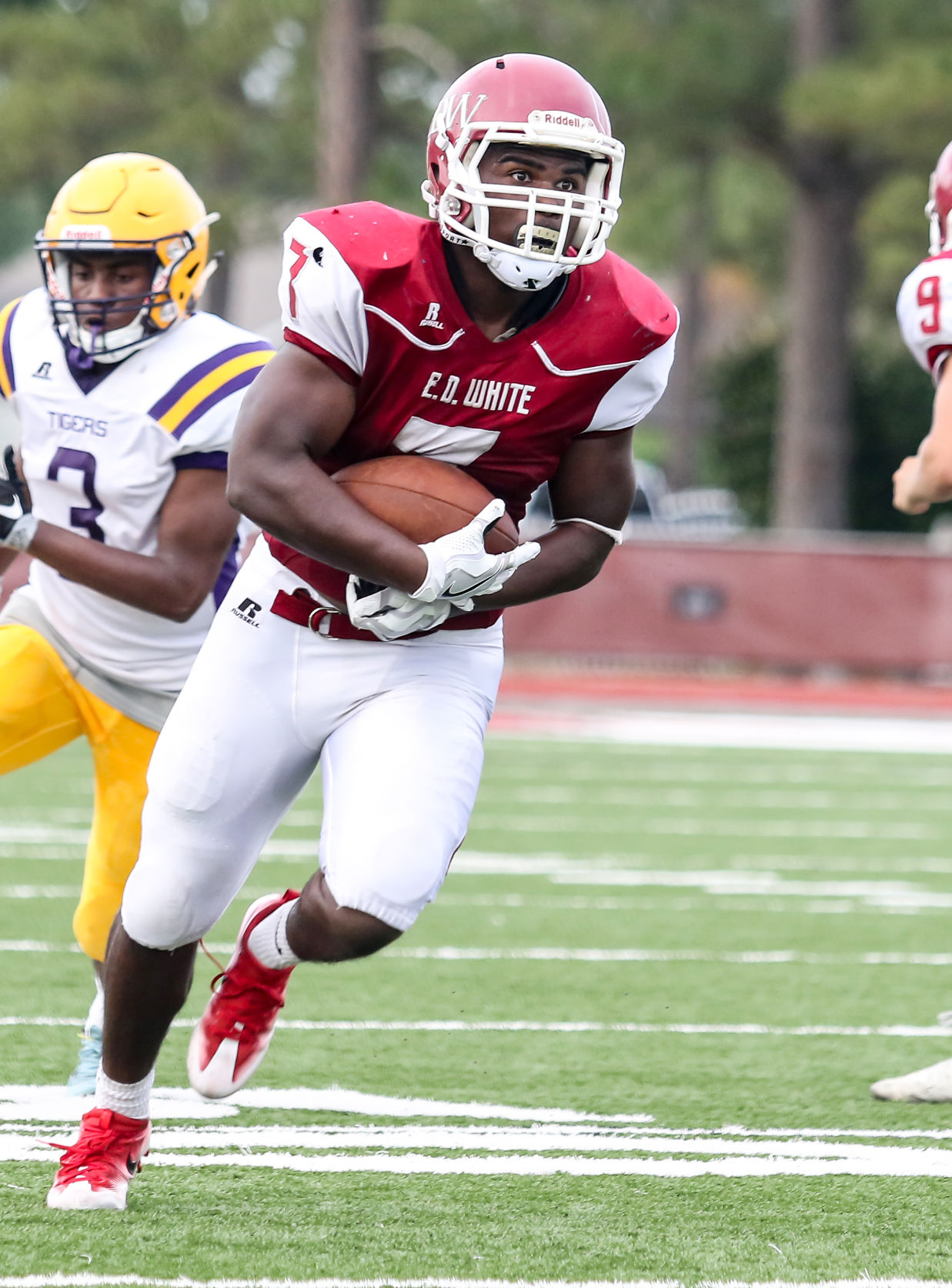 The E.D. White football team is now in control of District 7-4A.

The Cardinals beat South Lafourche 28-12 on Friday night, using dominant rushing and efficient defense to thwart the Tarpons and improve to 7-1 on the season.

With the win, E.D. White will now clinch the district championship with a win in any one of their final two regular season games – first against Ellender on Friday and then against Vandebilt in Week 10.

The loss drops South Lafourche to 5-3 overall and 4-1 in league play.

Cardinals coach Chris Bergeron said he knows Friday night was a big win, but added he and his team aren’t worried about district championship forecasts or playoff seeding just yet. He said the team’s main focus is on continuing to progress – something the coach said he thinks his team did on Friday.

“I’m so proud of our kids,” Bergeron said. “We came into a hostile environment against a good football team and we played a good game and got the win. South Lafourche is a good team and we knew that in their home field, they were going to give us a great game. It was a battle. But we were able to make enough plays to win the game.”

The first drive of each half sealed the win for the Cardinals.

E.D. White forced South Lafourche to go three-and-out on their first possession, which set up the Cardinals with the football, playing from their own 26-yard-line.

About 15 seconds later, they were ahead on the scoreboard.

On the first offensive snap for E.D. White, the Cardinals took it to the house – a 76-yard run from halfback Nik Shanklin, which put the Cardinals up 7-0, a lead they would never relinquish.

Bergeron said the Cardinals’ offensive line was great in the win, adding that they’ve been the unsung heroes for the team all season.

“We did a great job at the line of scrimmage,” he said. “We challenged them before the game and they delivered.”

South Lafourche battled, scoring a touchdown of their own in the first half to send the game to halftime with E.D. White up just 7-6 – the only difference being a blocked field goal.

But the first-drive blues struck the Tarpons again in the second half.

The Cardinals possessed first in the third quarter and ran the opening kick to South Lafourche’s 35-yard-line.

A few plays later, Shanklin was punching it into the end zone again, putting E.D. White up 14-6.

The Tarpons answered again, but missed the two-point conversion, sending the game to the fourth quarter with the Cardinals ahead 14-12.

In the final quarter, E.D. White’s depth was the story, as the Cardinals pounded South Lafourche on both lines of scrimmage, adding two more touchdowns to seal the win.

South Lafourche coach Blake Forsythe said he was proud of how his team played, adding that the Tarpons played just 19 players in the game.

Senior halfback Corbin Allen left early in the game with a shoulder injury and did not return. The Tarpons were also without several contributors who were suspended from the game for violating school rules.

“The kids played their hearts out,” Forsythe said. “The numbers game just caught up to us. We never stopped fighting. We never stopped competing. We didn’t hand them anything. They had to take it and physically put us out of our misery. But I told them I was proud of their fight and their effort in the game.”

South Lafourche wraps up district play with South Terrebonne on Friday. If they win that game, they will be in the clubhouse at 5-1 in the league.

That means that E.D. White would need just one win to guarantee a tie, which plays into their favor because they now own the head-to-head tiebreaker over the Tarpons.

There was a chance that Vandebilt could force a three-way tie with the Cardinals and Tarpons, but those hopes became slim to none after Assumption beat the Terriers on Friday night, spoiling Vandebilt’s homecoming night.

The premier games were in District 7-4A on Friday, but the area’s 5A district had action, too.

Terrebonne beat Central Lafourche 34-28 on Friday night, driving the length of the field in the final minute to clinch a game-winning touchdown drive.

With the win, Terrebonne is now 6-2, strengthening their postseason seeding. For the Trojans, they’ll likely need to win both of their final two games of the season to feel comfortable.

Also in Class 5A, Thibodaux rolled in a non-district game, crushing West St. Mary 42-0 to get their second win of the year.

The Tigers are just 2-6, but have an outside shot to make the playoffs because of their strength of schedule.

Thibodaux will finish the season with East St. John and Central Lafourche. If the Tigers win both of those games, they have a chance to sneak into the bottom-half of the 32-team field.

They were No. 39 before Friday’s win.

“It’s the playoffs right now for us,” Thibodaux coach Chris Dugas said. “We told the kids it’s a three-step process and step one is now complete.”

In Class 1A, Houma Christian snapped its two-game losing streak, beating St. Martin’s Episcopal 40-21 to earn their sixth win of the season. The Warriors are a near-lock to make postseason in Division IV.