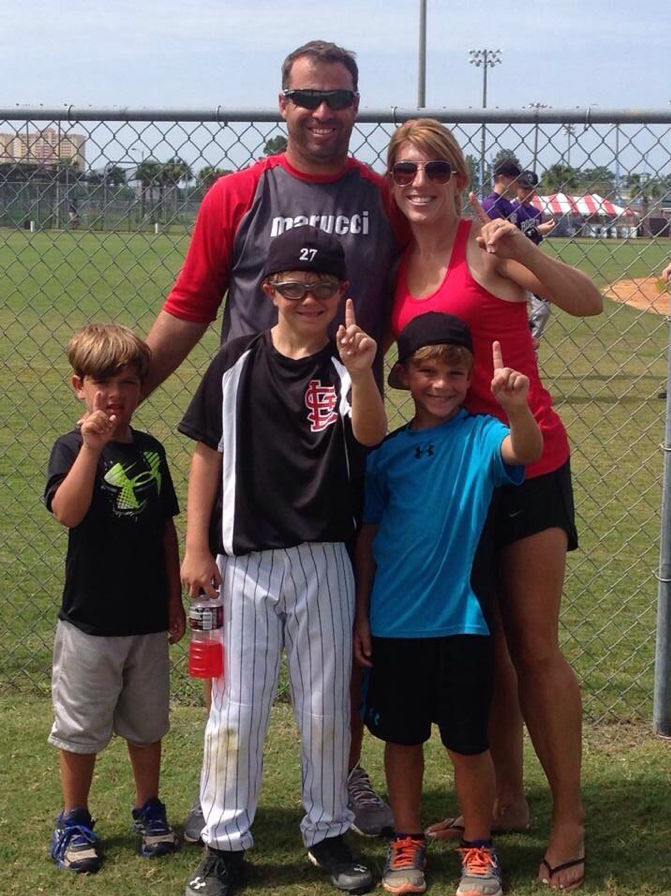 One area baseball coach has spent the majority of his summer traveling all over the country.

From the familiar locales of Louisiana such as New Orleans and Lafayette to all over the Southeast region in Atlanta and Nashville, and further out west in Houston and Phoenix, E.D. White Catholic baseball coach Shane Trosclair has made a living out of being on the road this summer.

The 37-year-old Trosclair not only coaches the baseball program at E.D. White each season, he’s also the head coach of Baton Rouge-based Marucci Elite, a 17U showcase team designed to help prep baseball players get noticed by college and professional scouts.

To that end, a total of 11 players from Marucci have already committed to play college baseball, including six to LSU, and others to Ole Miss, Arkansas, Duke, Louisiana-Lafayette and Southeastern Louisiana (SELA).

While the team may be based in Baton Rouge, its roster make-up is spread out, too. This past summer, Trosclair’s team featured 11 players from Louisiana, plus three from Arkansas and two more from Georgia.

And after winning the Deep South Super Regional in Nashville to advance to the national tournament in Glendale, Arizona, Trosclair’s Marucci team defeated Hamilton, New Jersey-based 9ers Prime at Camelback Ranch to win the inaugural Perfect Game 25 17U National Championship game back on Sunday, July 27.

Camelback Ranch is the spring training home of Major League Baseball’s Chicago White Sox and Los Angeles Dodgers, and it’s not the first big league stadium Trosclair was able to coach at this summer. Along the way, he was able to coach from the dugout of his favorite Major League club, the Houston Astros, at the team’s stadium Minute Maid Park.

Experiences such as those are humbling, once-in-a-lifetime opportunities, Trosclair said.

“I’m a diehard Astros fan and to actually coach a game on their field and be in their dugout as the home team, that’s a childhood dream come true,” said Trosclair. “I’m 37 years old, and for a team that I’ve rooted for every day, that was pretty special.”

As for how Trosclair was introduced to Marucci Elite, it all began a few years ago at E.D. White Catholic. Trosclair was attending a family member’s basketball game at the school when he says he got an e-mail from Kyle Achord, Marucci’s General Manager, asking if he’d be interested in coaching a team.

Trosclair agreed to it, and this summer marked his second year with the showcase team.

“We opened up in New Orleans for the Marucci Classic,” Trosclair recalled of his summer journeys. “I’ve been to Nashville, where we won a Deep South super regional, which qualified us to be in Phoenix. From Nashville, I was in Lafayette. We went to Atlanta and spent a week there. We were in Houston at the Minute Maid Classic. From Houston, I came home for a day and then flew off to Phoenix.”

Being on the road so much can have its shortcomings, of course. It can keep coaches away from their families and cause them to miss valued time with their loved ones.

So how is Trosclair able to maintain a balance between his job as a full-time baseball coach practically year-round and his home life as a husband and a father to three kids – all boys? The answer, he says, is in an old saying: “Behind every good coach is a good wife.”

Trosclair has been married 12 years to his wife, Keena, and says that without her support, his success as a coach would not be possible.

“I spent a total of 13 days and nights away from my family this summer,” said Trosclair, “and my wife does a great job allowing me to work with Marucci and to do those things I was able to do. My schedule in June, I have two days off, two days where I’m not around baseball. The other 28 days is strictly baseball, whether it’s E.D. White or Marucci.

“I do sacrifice a lot of time, but it is baseball and it’s what I was born into. My wife allows me to really live my dream and continue to get better as a coach.”

Being a full-time coach takes some sacrifices, but in the end, his family is supportive and enjoys tagging along with him to games, he said. They don’t miss any of E.D. White Catholic’s games, home or away, and this summer Trosclair’s three kids all got to travel with their father around the Southeast region. They accompanied their dad to Atlanta, Nashville and Houston, where they served as bat boys at Minute Maid Park. The only trip the family didn’t make together was to Arizona for the national championship.

Trosclair said he is fortunate that his wife and three sons – who range from age 5 to age 9 – like to travel, and that his sons even look up to the Marucci players as older brothers and role models.

“Having a wife and kids that love baseball and love being at the park makes it a little easier,” Trosclair said. “It’s one of those deals where they also gained relationships and they see the rewards of what hard work does. They got to watch our National Championship live over the Internet, and they got to see their big brothers and their dad win a championship. It was a special moment for them.”

For now, Trosclair is back home, able to temporarily forget about the daily grind of being a baseball coach and focus on just being a dad. He spent the past week in Grand Isle with his children, enjoying some father-son time while exploring Louisiana’s coast and fishing for crabs.

It’s being on the road so much that makes family getaways like these all the more special.

“It is hard sometimes, and I do have to miss some of my kids’ games, but in the end, it makes the family strong, and they know I’m working to get better as a coach and that I’m out making money,” Trosclair said. “I sat in my living room (recently) and said to my wife, ‘Seven straight months of baseball is in the books and it ended with a national championship.

E.D. White coach Shane Trosclair poses with his wife Keena and the family’s three boys. The Cardinals’ coach has had a strong summer, anchoring Marucci Elite to big-time summer success.