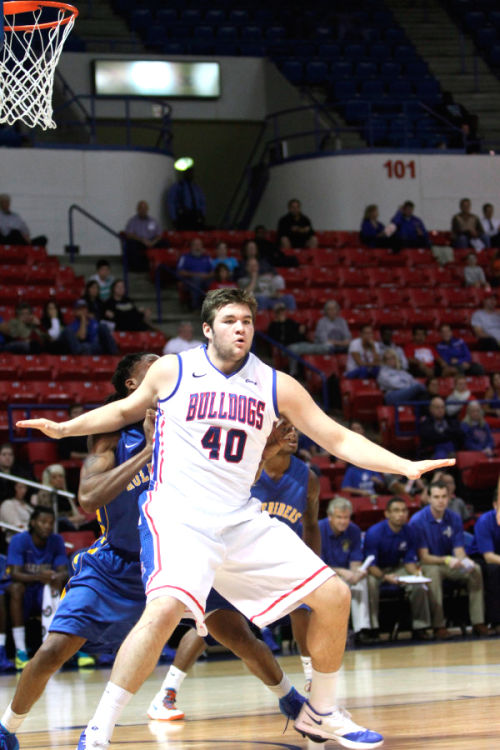 Houma native and Ellender graduate Gilbert “Gibby” Talbot said that he loves Louisiana Tech – the campus, his classmates, his teammates and everything else about the school.

Talbot said he even loves Bulldogs’ coach Michael White, touting that his two years with the esteemed coach have been some of the most informative years of his career.

But after struggling to find playing time in the Bulldogs’ fast-tempo offense as both a freshman and sophomore, Talbot said he knew it was time to make a move to better his career.

So for that reason, he’s packing his bags and heading on home.

The massive 6-foot, 10-inch sophomore center announced exclusively to the Tri-Parish Times this week that he would transfer from the Bulldogs’ program and enroll at UNO.

While with the Privateers, Talbot will have to sit out the entire 2014-15 season, per NCAA rules.

But he will offset the waiting period by using his redshirt year next season, meaning that he will still have two years of collegiate eligibility beginning in the 2015-16 season.

Talbot said the one-year wait is a bummer but added that he’s excited for a change of scenery and an opportunity to shine at UNO.

“Being in high school, it was an interesting situation with them, because I didn’t know what division they would be in,” Talbot said. “But they’re not D-3 anymore. They’re back in D-1. I think they are a program on the rise, and I know their coach pretty well. I love him, his staff and the players there. I’ve played with or against pretty much everyone on that team. I’ll be walking into a place where I’ll already be knowing more than half of the team.”

For Talbot, Louisiana Tech was never the ideal fit in terms of basketball X’s and O’s.

He said that he’s leaving the program on good terms, adding that he “learned so much” from White and his teammates in the past few years. In his two seasons with the team, Tech has been on a magical ride – a two-year stretch of 25-plus win seasons.

But at the end of the day, the style of basketball that the Bulldogs play is more up-tempo and predicated on elite guard and wing play – a style that doesn’t fit a post player like Talbot.

Because of that, he said he decided to explore greener pastures – a program where he’d have a greater opportunity to see playing time.

So with his decision made, Talbot said he started to look around the college basketball landscape for a new home.

While he started to search, his eyes kept coming back to the Privateers because of a couple factors.

The first was his familiarity with the team. Talbot said he has known UNO guard and Houma native Nate Frye his entire life with the two sharing a close friendship.

From there, Talbot said he played AAU with a handful of Privateer players. Those he didn’t play with, he played against for several seasons.

“There was a lot of familiarity there,” Talbot said. “That was a big selling point for me.”

The new UNO center said he has had a long relationship with his new coach dating back to Talbot’s days at Ellender and Slessinger’s days as an assistant coach at Northwestern State.

Talbot said he likes his new coach’s attitude toward running a program, adding that he’s a guy that is well-liked by UNO’s players.

“A lot of times coaches tell you something to get your interest, but then they don’t follow through with it,” Talbot said. “But everything he’s told me, I’ve taken it back to my friends on the team and talked to them about it. They all told me the same thing. They all tell me that Coach Slessinger is legit. If he says something, then that’s how it’s going to go down.”

So while waiting to play in a UNO uniform, Talbot said he’s going to focus on getting better. He said he believes the year away from competition will be good for his career, and will allow him time to prepare his body and skillset for the final two years of his collegiate career.

“I think it’s going to be good for me,” Talbot said. “You know me. You know my story. I haven’t been playing very long. So I think that I’ll be able to use the year away to learn more about the game and to polish some things up.

“When I get back out there, I’ll be closer to home and closer to my family and friends. I can’t wait. I’m very excited to be a UNO Privateer.”

Ellender graduate Gilbert “Gibby” Talbot posts up this season while playing for Louisiana. Talbot announced exclusively to the Tri-Parish Times this week that he intends to transfer to UNO – a move he said will allow him to see more playing time.