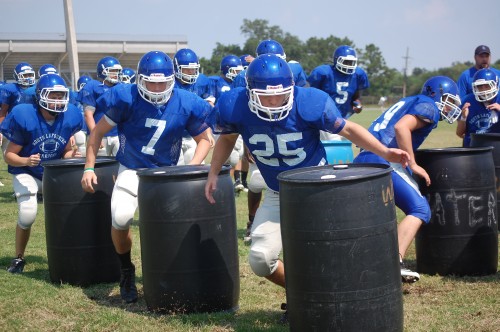 When I was 15 or 16, these were the worst calendar days of the year – the final few days before the new school year began.

These are days when children have to go to sleep early, wake up even earlier (double yuck) and cram into classrooms to learn trigonometry.

Seriously – do you all know the last time I used 12th grade trigonometry?

Yup, I’ve never used it since – nor will I ever use it again.

OK, OK, I kid. I know the importance of math. I don’t want any naughty letters from anyone who can figure out 34-squared off the top of their head.

That’d be serious trouble for the Case-man.

But OK, back to the point – times have changed and the early days of August are no longer times of doom and gloom for the area’s best-looking sports writer.

Because school being back in session means sports are getting ready to rev up.

Sports on the horizon means I will finally have something to do again.

No offense to Swampland baseball, but I’ve been pretty bored since the end of the spring track season.

Sure, baseball is our pastime and I love to watch our youngsters play.

But the entertainment value just isn’t there.

Heck, it’s been so bad that I got a mo-hawk recently – for no reason other than just to do it.

When that happens, you know it’s time for me to get back to work.

While there, it’s easy to see that storylines surround the entire Tri-parish area.

As a fellow Tarpon myself, the one nearest my line of sight is how South Lafourche will respond to its first-year head coach Dennis Skains.

Skains is a high-energy, young and exuberant guy.

One would think his personality would be a perfect fit in the land of big blue.

But the school’s impatient fans just ran out a worthy coach who lost to neither Central Lafourche nor Thibodaux in seven total meetings, so time will tell how that storyline plays itself out.

From program rebuilding to a program already built, these eyes will also be firmly entrenched on Patterson this season.

The Lumberjacks have been a wrecking ball for each of the past two seasons – sporting a roster that has included LSU halfback Kenny Hilliard and LSU linebacker Lorenzo Phillips and also college players like Louisiana-Lafayette’s Tremaine Lightfoot, Houston’s Trevon Stewart and Louisiana Tech’s Jaydrick Declouet.

That’s not even mentioning quarterback Justice Jones, who inked a letter of intent to Texas-Southern.

But now all of those players are gone and Patterson will have an entirely new cast of characters.

It is my belief that Tommy Minton is the best coach in the Tri-parish area. How he handles the baby Jacks will determine how things play out in ’12 for St. Mary’s powerhouse.

I’m also interested to see how Covenant Christian does in their first varsity season in the LHSAA.

Sure, the Lions aren’t able to qualify for postseason play in their inaugural season.

But it will still be fun to see if their successes in the Christian league will carry over to the “big boys.”

It won’t take us long to find out.

Their first-ever game in the LHSAA will come against Brother Martin.

Anyone with knowledge of the prep football landscape knows that will be a very, very steep test.

Speaking of steep tests, we cannot mention prep football without asking the $64,000 question – will Ellender win a game in 2012?

The Patriots have been shutout for this entire decade so far. But they have plenty of promising young players. Their second-year coach, Terry Washington, also looks like a winner.

I’m not a betting man, but if I were, I’d bet on the Patriots to get into the winner’s circle at least once this year.

Football is great, but volleyball also has me very excited.

I’m not a hardcore volleyball fan like some others within the Tri-parishes.

But let’s be real here – the H.L. Bourgeois/Terrebonne volleyball rivalry is awesome.

One will never find as much passion amongst players and crowd intensity as what is on display in their two meetings per season.

I know it sounds crazy to say that of a second-tier sport, but it really is a sight to see.

Both the Lady Braves and Lady Tigers return strong rosters, and mark me down as one who cannot wait to see how the 2012 version of their rivalry unfolds.

Other local programs like Vandebilt and E.D. White also figure to have strong teams capable of pushing for the state title.

I love me some local state title pushes.

As it always does, football will fly by and then we will be onto basketball.

Once the hardwood is finished, we will then go back outdoors and begin baseball and track.

Alas, sports are back and I’m busy once more.

That surely beats the summer cycle.

I already got a mo-hawk – who knows where my boredom would have taken me next.

The South Lafourche football team works on its conditioning and agility during spring practices. The Tarpons are one team Sports Editor Casey Gisclair is looking forward to seeing in the new prep football season.