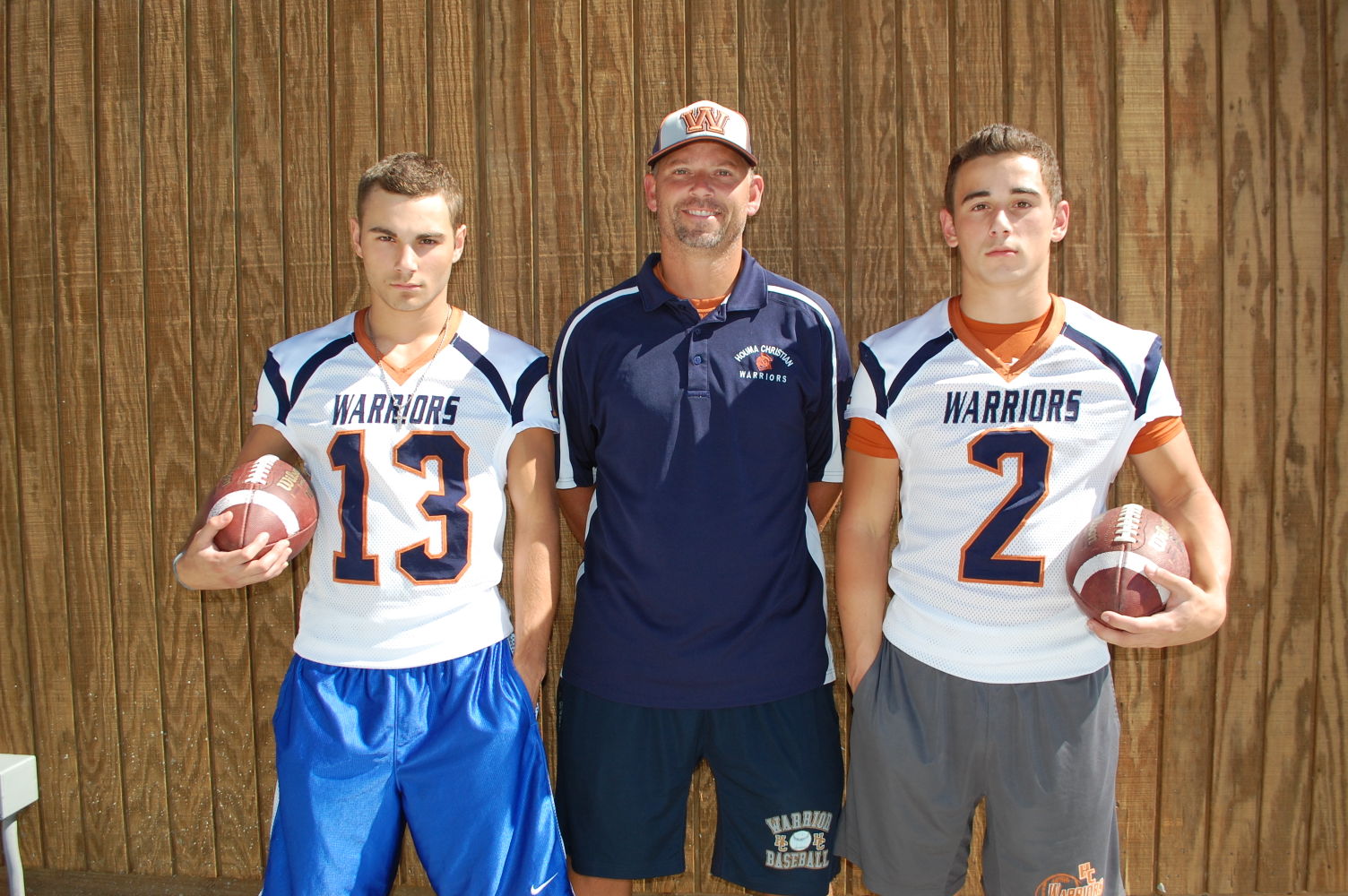 For big brother and Houma Christian senior quarterback Drake Battaglia, being around family during his final prep season is what means the most – the ability to look around both the playing field and locker room and always see the face of a loved one looking back.

For little brother and Warriors’ junior wide out Devin Battaglia, it’s the high-fives, celebrations and big-time plays that make this all so memorable – the comfort he receives from knowing that he can share all of his receiving touchdowns with the big brother that he competed against for his entire childhood.

For father and the team’s head coach Chuck Battaglia, seeing his two sons work together toward a common goal is a feeling of pride that the coach said can’t be replicated anywhere else in his world.

It’s a family affair on the football field for Houma Christian this season as Drake and Devin make plays for their coach and dad Chuck in an effort to lead the Warriors deep into the Division IV playoffs.

The brothers and their proud papa shared their story this week, touting that these past few months have been special for everyone involved.

“It’s such a blessing to be able to see them play together and to be able to coach them,” Chuck Battaglia said. “These last few years have been such a great time. I’m so proud of them and the things that they’ve done.”

“To play with my brother and to play for my dad is something most people would love to do but never get the chance to do,” Devin Battaglia added. “I love it. I couldn’t imagine it any other way. Personally, I think I’m very fortunate to be here with two people that I love.”

On the gridiron, the Battaglia brothers are a hit – easily one of the top duos in the entire Houma-Thibodaux area.

As a quarterback, Drake is among our area’s most complete players. A 5-foot, 10-inch, 170-pound standout, the senior does a lot of his damage as a rusher, having pounded the rock 87 times for 445 yards and seven touchdowns in the team’s first seven games of the year.

But as a passer, Drake Battaglia is a serious threat, as well. He’s completed 61-of-103 passes for 826 yards and nine touchdowns – numbers that make him easily one of the best statistical players in the area.

“He’s a great quarterback,” Devin said of his older brother. “There are things that he does on the field that amaze me. I’m so lucky to be able to play with him and to be a part of the successes that he’s having. I take pride in being a pretty good athlete, but Drake is absolutely amazing. The things he does are great.”

Devin’s statement is incredibly accurate – a lot of Drake’s stats are shared between the two brothers.

A lot of the success from brother-to-brother is each’s individual athletic ability – they both are solid football players.

But an uncanny, unexplainable bond has something to do with it, as well.

Drake and Devin said they always sort of have an idea of where the other is on the field at any given time – a bond that makes it easy to make big plays on the field when things break down within a play.

As Drake extends a play with his feet, Devin knows exactly when to break off his route and come back to the football to make a play.

From there, the play called goes out of the window and it’s old-school, backyard-style pitch and catch between the brothers – something the kids have been doing since they were 5 years old.

“In our offense, we want to get him the ball a lot because he’s a great athlete,” Drake Battaglia said. “But I’ve been playing with him my whole life. Through doing that, I’ve picked up the timing of some of routes and some of the things that he’s going to do. I want to spread the ball out and I want to get everyone involved, but when I’m in trouble, he’s my go-to guy.”

“They have this connection about them,” Chuck said of his two sons. “It’s pretty awesome to see. Some kind of way, they always sort-of know where the other is on the field.”

In the present, the Battaglia brothers are a united force with a sole mission to win games for the Warriors’ upstart football program.

But the father remembers a time where his two boys weren’t on the same team – a time when their energies were most often spent trying to beat one another in the name of family supremacy.

The young men’s athleticism isn’t a surprise to most, as Chuck was a former collegiate outfielder for Nicholls. But the husband and father is quick to tout that Mileina deserves a lot of credit, too. She is a dance and gymnastics instructor who also has a background in Miss Fitness competitions and other athletic affairs.

“She’s a competitive person, too,” Chuck said of his wife. “The people who say that the boys get it all from me aren’t all the way right. Most of my boys’ athletic ability when it comes to balance, agility and their ability to play with pain and withstand injury are all because of the training they did in gymnastics as young children with my wife. She deserves a whole lot of credit for their successes athletically.”

Because of the boys’ closeness in age, the scene in the Battaglia household was often one of brother-to-brother combat with Drake and Devin going at one another in just about anything you can think of.

“It was a constant competition in the Battaglia household,” Chuck Battaglia said when asked to look back on the past. “Since day one, before they even were in organized sports – back when they were in diapers – they would compete against one another.”

“You name it – we did it,” Drake said with a laugh when asked about growing up with his brother. “Any and every little thing was a competition. We always tried to be better than one another.”

“We’d play Basketball, baseball, wrestling, video games, racing, tumbling – we always were locking horns,” Devin added to his brother’s statement. “It was rough. We’d fight and have our moments, but it was all good, brotherly love. If there’s a winner and a loser to be named, we wanted to do it and play against one another.”

As one might expect, Drake got the better end of the majority of the battles because he’s the older of the two.

But even the big brother admits that Devin got his fair share of licks in when the two were kids.

The brothers remember the first time Devin beat Drake in a head-to-head athletic competition – a backyard wrestling match between the siblings.

“I beat him in wrestling this one time – it was the first time I ever got the best of Drake,” Devin remembered with a laugh. “He was beating me up and it just really, really got on my nerves. I reared back, lifted him over my head and threw him on the ground. When I looked down and realized what I just did, I was sort-of in shock. To me, it was a big deal that I was physically able to do that to Drake. Being able to do that, I got a lot of confidence in myself, because I definitely always looked up to Drake – I still do now.”

But for every battle the boys fought as youngsters, it’s all paid off in the long run. Both Drake and Devin are quick to tout that their successes today are directly correlated to how hard they worked to beat one another as kids.

“That kind of stuff makes you tougher and it makes you better,” Devin said.

“We wouldn’t be where we are today if not for those days,” Drake added in agreement.

FATHER ENJOYING IT WHILE IT LASTS

So while Drake and Devin make plays and lead Houma Christian toward the playoffs, Chuck is on the sidelines with a headset on, quietly wishing that life would slow down a little so that this ride could last a little longer.

The father has coached his boys for their entire careers – from youth sports up until now. He said the entire process has been a blur and he is often wondering where all of the time has gone.

Drake is a senior heading toward the final days of his prep playing career. Devin won’t be far behind with just one more season to play after this one.

“There are times on the ride home where I’ll start to talk to Drake about that,” Chuck said. “He quickly shoots me down and says, ‘Dad, don’t start, because I don’t even want to think about that right now.’ I’ve coached my boys since they were barely taller than the grass on the field. Now, they are young men. There are definitely times where you wonder where it’s all gone.”

The father said he loves to coach his kids because of his own personal competitiveness and because he’s been able to teach his sons life lessons along the way.

But he added that there are some times where he wishes that he could sit back and enjoy their careers and their peak moments without having to worry about having to manage an entire football team in the process.

“There are certainly times where I think to myself how nice it’d be to be sitting up there in the bleachers just enjoying watching my boys,” Chuck said. “But I love my job coaching, too. It has its ups and its downs. But I love that I get to be around them so often and be such a big part of their maturing and a big part of the things they are trying to do.”

When asked for a best moment on the football field for the proud father, he gave an answer one wouldn’t expect.

It wasn’t a touchdown pass Drake gave to Devin, nor a long run or anything that happened on a Houma Christian gridiron.

He said his most fond memories came this past summer when the three signed up to play flag football at the YMCA and got to share the field with each other.

“To be able to throw passes to my boys in competition – that was special,” Chuck said. “The things they do in the game are amazing, but to be blessed enough to share the field with them is something I’ll never forget.”

“We’re blessed,” Drake added. “We’re all a part of this. We know that we won’t all be together on this team next year, so we’re just enjoying it while it lasts.

“Most teams say they want to be family or a group of brothers. For us, we really have that, and we’re fortunate because it’s really special to have the mix that we have in our school and in our locker room.”

The Battaglia family are huge cogs in the Houma Christian football team’s successes. (From left), junior wide receiver Devin, father and coach Chuck and senior quarterback Drake each play a big role in what the team is doing. The brothers and their father tout that being able to share the sport that they love is a blessing – a time that they will all cherish forever.