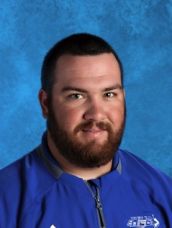 He is the only candidate who applied for the job from an area high school.

Tarpons principal Gaye Cheramie confirmed to The Times on Wednesday morning that the school has hired H.L. Bourgeois offensive coordinator Blake Forsythe to be its next coach – the second-straight season the school will have a first-year coach.

Forsythe just turned 26 and will be one of – if not the youngest – head coach in Louisiana for the 2017 season.

Prior to coaching at H.L. Bourgeois, Forsythe also spent time at E.D. White.

He was a decorated player at St. Charles Catholic before getting into coaching.

“Coach Forsythe brings with him an enthusiasm and love for the game,” Cheramie said. “Coach Forsythe is a welcome addition to the South Lafourche family.”

Forsythe will begin as a faculty member at South Lafourche on Thursday.

He said he can’t wait to get started.

The former Braves offensive coordinator is widely regarded as one of the brightest young football minds in the Houma-Thibodaux area – a coach who landed at South Lafourche, in part because of the impression he made on the school’s search committee, but also because of the extensive list of local references who vouched for him during the application process.

With the Braves last season, Forsythe’s offense thrived, scoring 40 or more points in three games, and making the Class 5A State Playoffs, despite a brutally challenging schedule, which pit the Braves against Destrehan, Hahnville, East St. John, Thibodaux and Terrebonne, among others.

Forsythe said he appreciated his time with the Braves, but said he’s always wanted to be a head coach.

He said he was attracted to the Tarpons job because he has friends from down the bayou, and he knows the community tirelessly supports South Lafourche football.

Forsythe will be replacing outgoing coach Brandon Nowlin, who was relieved of his coaching duties in early November after going 3-7 in his lone season with the team.

Nowlin stayed with the school through the first semester, but has since been relocated to another school within Lafourche Parish.

“I’m very excited for this opportunity at South Lafourche,” Forsythe said. “It is a great community with a blue collar mentality that loves their football. … I’m excited and ready to get to work for the season.”

In the past, Forsythe operated out of shotgun spread sets, but the Braves ran the football primarily out of those sets – almost in a veer or option-style look.

With the Tarpons, Forsythe said he will work to fit his talent, but the Tarpons will always look to control the line of scrimmage on both sides of the ball.

South Lafourche was down last year, but isn’t expected to be that way for long.

The Tarpons return halfback Corbin Allen, receivers Marquis Francis and DaMarcus Caine and offensive lineman Chad Cheramie on offense – all players who may get collegiate looks.

Defensively, the Tarpons return hybrid lineman Terry Hunter and Jeremy Rodgers, who are two of the most dominant players in the area.

Forsythe said he can’t wait to evaluate his team and get to work in advance of spring football.