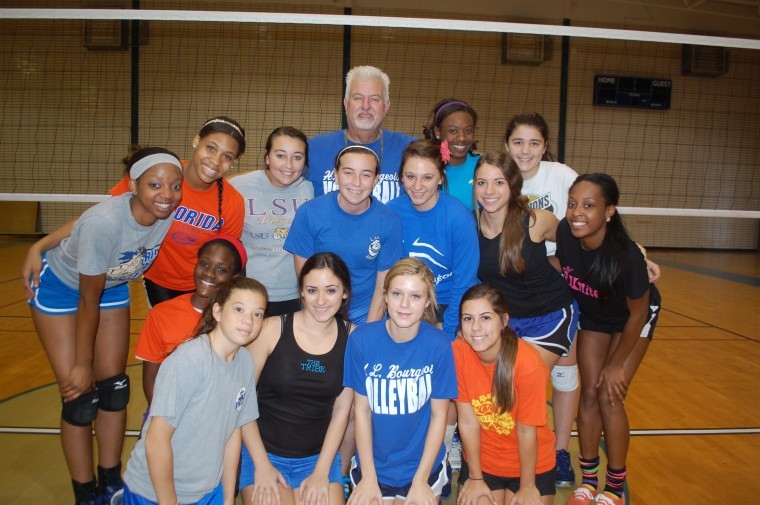 “That first bunch, they taught me,” Verret said. “I’m not too proud to admit that.”

Now, close to 20 years later, the coach is widely regarded as among the best volleyball coaches in the area and the state.

Verret won his 500th game earlier this season at the Assumption Tournament.

Now in his 19th season, Verret’s Lady Braves have never missed the playoffs – a streak that appears almost certain to continue this year.

The coach shared his formula for success and his career story this week, saying he attributes all of his accomplishments to dedication to the sport and a genuine care for his players.

“I love my kids,” Verret said. “I do. They have to be here for me to be winning these games, right? It’s not about me. It never has been. It’s always about good volleyball and the kids.”

Verret was born around sports.

“I’ve been involved in athletics since I was young,” Verret said.

But becoming a coach wasn’t a formal plan – it just sort of happened.

After graduating from Nicholls, Verret returned to H.L. Bourgeois and tried to be a Physical Education teacher.

“Of course, that’s impossible because PE coaches just stay at a school forever,” Verret said with a laugh.

So instead of PE, Verret got a job in special education.

After his first semester on the Braves’ staff, Verret said he was asked to become the school’s tennis coach.

“And I had played tennis, so most definitely, I was interested,” Verret said. “So I got involved in that.”

Right around the same time that he took over the tennis program, Verret said he offered to help then-head coach Chip Didier with the school’s volleyball program.

He served as Didier’s assistant coach for more than a half decade.

When Didier left H.L. Bourgeois to get into collegiate coaching, Verret accepted the job as the team’s head coach – a job he’s held ever since.

“I just sort of fell into it, honestly,” Verret said. “It was just an opportune moment, and I took it and I ran with it.”

Verret would be the first person to admit that when he took over H.L. Bourgeois’ volleyball team, he was far from an expert in his craft.

When he started as an assistant coach in Gray, Verret’s volleyball background consisted of playing intramurals in college and a coaching course he took at Nicholls that was instructed by the Colonels’ coach.

“She made us do lines and do stats and I just kind of fell in love with the game,” Verret said.

The coach said it was that love for the sport that allows him to succeed.

From his first days as a head coach, Verret said he became a student of the local volleyball scene.

He said he absorbed as much information as he could about things other programs did and tried to take the successful facets into the Braves’ locker room.

“I immediately observed some of the top coaches in the area,” he said. “We attended several clinics and I got my teams into camps.”

To this day, Verret says that desire for the sport remains.

He remains actively involved in club volleyball during the offseason to mold future players.

During the season, he said he spends his energy game planning so his players can be as prepared as possible for every match.

“I feel like to be successful, you have to be dedicated,” Verret said. “That’s been a part of my life since I was a kid. I remember watching my dad sit in the living room and grade film for days. I was brought up with it. There’s no other way for me. It’s just part of my life.

“To be successful, you have to be totally dedicated.”

That dedication is what separates Verret from others, according to Didier, who later returned to the high-school scene with Terrebonne and coached countless battles against H.L. Bourgeois.

“He loves what he does,” Didier said. “He’s a tremendous coach.”

Success speaks for itself

It’s hard to argue with the bottom line – Verret’s resume is loaded with success.

His teams have never missed the playoffs and are annually one of the top teams in the area.

“I don’t even know off the top of my head how many times we’ve made it there,” Verret said with a laugh. “It’s been quite a few, though. I’d have to go back and look.”

During the coach’s 19 years, he boasts that there have been countless memorable wins and an equal number of gut-wrenching defeats.

He shared a few of his top memories, saying there was no way he could narrow down a favorite victory.

“There’s the classic Bourgeois and Terrebonne rivalry – that’s been more than special for our kids,” Verret said. “Then there’s been epic games between us and Assumption. Whoa Lord, it’d be impossible to pick just one. But if I absolutely had to choose just one, I’d probably point to the game back in 2003 when we played Dominican in the semifinals. It was just a wonderful match. … That was a team that we didn’t think would go that far, but because they were great athletes, they excelled. We were underdogs, but we went up against the Catholic bunch and we did well.

“Then, of course, in this gym, Assumption had won like 110 district matches in a row and we broke it and we beat them here. That was a huge accomplishment for us.”

Then came the 500th win this season at the hurricane-shortened Assumption tournament.

Verret said he only knows his total of victories because an acquaintance started a tally early in his career.

He said he’s humbled by the number.

“It’s an amazing accomplishment,” the coach said. “I never expected this to happen when I started all these years ago.”

Verret said he believes this year’s bunch has a shot to also make a deep playoff push.

They are led by senior like Shannon Jones, Jamie Verret and Meghan Stevens.

“We’re coming around,” the coach said. “We think that we can be a strong group by the end of the year.”

“Peter’s always going to have a solid team,” Didier said. “That’s not an accident. That’s because he’s a great coach.”

Love for the players trumps all

The wins are nice.

But to Verret, the relationships are even better.

The Lady Braves coach said he has a genuine love for all of his players – past and present.

“These kids become like my own kids,” Verret said.

The bond he forms with his players is why they believe he is the leader of one of the most successful programs in the area.

“He’s just an amazing coach,” Stevens said. “Yes, he pushes us very hard. But he’s a great leader. He teaches us what it means to give your everything to something.”

Off the floor, Verret also keeps up with what’s going on in the lives of his team.

They say they periodically have team barbecues and fish fries and other gatherings.

The coach also shares his love for Mardi Gras with his team and does his best to be an active role model in his player’s lives.

“Family,” senior Raeven Scott said. “Everything coach does is to make us into a big family. It’s like a big family reunion, basically.”

With close to two decades under his belt, Verret said he doesn’t know how much longer he will continue as the Lady Braves’ coach.

But as long as the passion and the love is there, one should expect Verret to be with the Lady Braves.

“These kids have been my life,” Verret said. “I love what I do. I wouldn’t trade it for anything in the world. I love my life.”