I have an idea for prep football 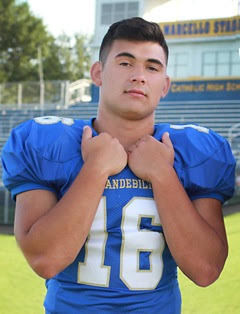 The way colleges get people excited for football season is by hosting preseason media days.

What happens at these media days is the teams gather and talk about why they’re excited for the new year.

Usually, the coach speaks. It’s not uncommon at all for him to be flanked by some of his players – usually an offensive guy and a defensive guy.

The events are utterly pointless, and they serve pretty much no purpose other than to give people like me something besides baseball to talk about during the boring summer months.

Because, let’s face it. There isn’t anyone who really likes to talk about baseball all that much anyway – unless it’s LSU baseball, of course. Then we’d have to make an exception to the rule.

Jokes about America’s Pastime aside, one fun thing about preseason media days is that they allow the media a voice to express what they think will happen in the upcoming season.

At each media day, voters pick who they think will finish first place in a respective conference. They often rank the teams in each league from best to worst.

Likewise, they come up with Preseason All-Conference teams, which, again, means next to nothing when fall rolls around but still makes for interesting water cooler fodder.

So that got me to thinking.

There is no such event for high school football. There is no Houma-Thibodaux preseason media bash.

But there should be.

Wouldn’t it be cool if all 11 prep coaches in the Houma-Thibodaux area could gather and host their own little kickoff party press conference for the season?

Man, I know that’d make life easy for a lot of local reporters to get all the major players in the same place for a day of football.

Likewise, I’m sure the kids would enjoy it, too. To a 16-year-old, sitting on a podium with a microphone is one of the coolest things in the world.

It’s probably too late to organize a media day for prep football in 2016, because the season is right around the corner.

But I’m going to do my diligence as a reporter and give you my preseason prognostications.

Heck, the timing fits. Most of the area’s teams started their fall camps on Monday.

The nominees are in ABC order by last name, so the list isn’t rank-ordered in any way.

1. Corbin Allen, South Lafourche – There are a lot of senior halfbacks who can never sniff a 1,200-yard season. But yet Corbin Allen did that last season as a sophomore. There’s no doubt that Allen will have a giant bulls-eye on his chest as he enters his junior season. But it doesn’t matter, because he’s a really, really good one.

2. Davontavean Martin, Ellender – Martin is more of a basketball guy than a football guy. But that doesn’t mean he’s not dominant on the gridiron. How can he not thrive? He stands 6-feet, 4-inches tall and can jump out the gym. The Patriots just throw the ball up and he goes and gets it. He’s going to have a huge season.

3. Brennan Rogers, Vandebilt – I saw a couple Vandebilt games late in the season. This Brennan Rogers kid runs hard – as hard as I’ve seen someone run in a long, long time. And he’s only a junior, which is scary. With another year in the system, he should be due a breakout campaign.

4. Amik Robertson, Thibodaux – Thibodaux always has athletes. But senior Amik Robertson just might be the best that they’ve had in a long, long time. The standout two-ways player is a force for the Tigers – a prospect that is generating tons of interest from schools around the country. He will be in the headlines a ton this fall.

1. Louis Blanchard, South Terrebonne – I love this kid. Big Louis is a monster on the defensive line for South Terrebonne – a three-time All-District pick and a two-time District Defensive MVP. Opponents just can’t move the guy. He’s too big. Barring injury, he wins another MVP and gets a hat trick.

2. Blair Brooks, Thibodaux – Arguably the most hotly recruited local is Brooks, who is dominating the camp scene this summer. At the LSU Camp, many folks said he was the best DB on campus. Brooks is overlooked because sometimes a safety can’t impact a game like other positions do. But he’s still a monster back there.

3. Alec Rios, Vandebilt – Rios battled injuries in 2015, but with renewed health, he should thrive in Jeremy Atwell’s scheme. What makes Alec so good is his ability to play multiple spots along the linebacker corps. He’s a versatile threat for the Terriers.

4. Caleb Seitz, CCA – Some guys don’t like contact. But that’s not Caleb Seitz. This kid is a vicious linebacker for CCA – a guy who absolutely punishes the opposition. He isn’t half bad as a tight end, either. He may be the best local two-way player.

Preseason Picks (How I think local districts will shake out)

1. Hahnville – The Tigers return a ton under Coach Salt. They dethrone the Wildcats.

1. South Lafourche – The Tarpons are 18-1 combined the last two times they had a first-year coach. This is one of those years. I like those odds.

1. Patterson – Has Patterson ever not been good? They’re always the favorite and remain so again this year.

1. CCA – In Randy Boquet, I trust. The Lions repeat as district champs.