Player of the Week: Devon Madison 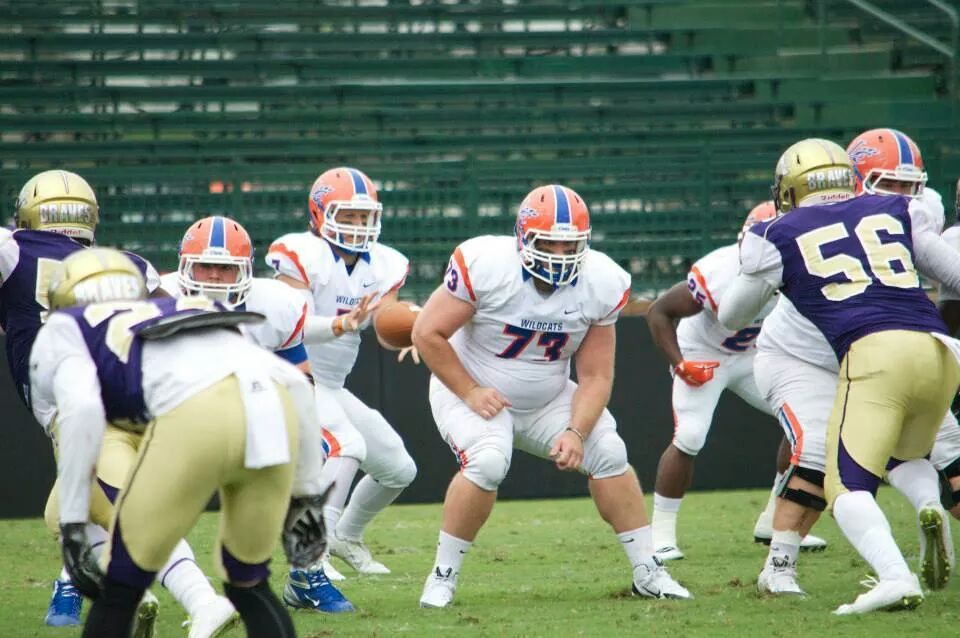 Sometimes all a person needs in life is an opportunity – one singular shot to thrive at a challenge that many deem to be too hard for you to conquer.

Houma native and former Vandebilt Catholic offensive lineman Dillon Rhodes got his opportunity during his senior season with the Terriers in the form of a scholarship offer from Louisiana College. With it, he was afforded the opportunity to extend his athletic career and further his education.

He hasn’t looked back since.

Once a dominant lineman for the Houma-based private school, Rhodes has now evolved and built himself into a decorated collegiate linemen for the Wildcats – a small, Division III athletic university based in Pineville.

Now a senior and with the final games of his collegiate career looming, Rhodes said he’s enjoying his final year and soaking it all in for as long as he can.

The Wildcats sit at 4-4 through eight games, and Rhodes’ ambition is for the team to finish strong and score a winning season.

“My senior year is going great,” Rhodes said this week. “We have a really hard-working team this year that is committed to doing what it takes to make the program better. (Our record) is not what any of us hoped it would be, but we are fighting to finish with a winning season.”

For Rhodes, the path to Louisiana College is a story of two main characters – talent and fate.

Rhodes was a talented lineman throughout his time at Vandebilt, one of the better run-blockers for the Terriers’ 2010 team that went 8-3 on the season and won a first-round playoff game against McKinley.

But because Rhodes is a bit undersized compared to many major-college offensive linemen, he didn’t have a plethora of playing opportunities lined up as he approached the end of his time at Vandebilt.

That’s where a little bit of fate came in.

While working out at Pro Athletic Performance (PAP), Rhodes said Houma native Travis Carrell offered to lend him a hand and get his name placed on the radars of a few schools.

Carrell is heavily connected to several coaches around the country because of his experiences within football, which include stints working with Houma’s indoor-league teams when they were in existence.

Rhodes said within a week, Louisiana College had called and invited him to visit the campus. He committed to the program and has been a Wildcat ever since.

“This football team has given me a great experience,” Rhodes said. “As a kid, my entire dream was to make it all the way to the top. High school, college and then, of course, pro. It’s every kid’s dream to make it to the next level. I worked hard and did what was asked of me, and it eventually paid off.”

For Rhodes, the college experience has been a grind filled with hard work and dedication. The Houma native has been a reserve for the Wildcats in each of the past three seasons, playing sporadically throughout games in spot situations.

But because of his hard work and dedication to furthering his game, Rhodes earned his place as a starter in 2014 and has been among the team’s most productive lineman.

The powerful, near 300-pound-guard said he credits a lot of the lessons he learned at Vandebilt for his current success.

He said he wanted to thank his former teammates and coach Laury Dupont for caring about his well-being and teaching him to be a better person and teammate.

Rhodes’ senior season was an extreme test of grit for everyone in Houma because it was the same season that four Vandebilt students, including then-starting quarterback T.J. Cantrelle and sophomore defensive back Ian Haydel were tragically killed in a traffic accident mid-season.

His classmates, Megan Hitt and Gabrielle Hebert, were also killed in the incident, which broke all of Houma and the surrounding area’s collective hearts as it unfolded.

“Vandebilt was a huge help to me and my career,” Rhodes said. “We had a great coaching staff that cared about more than just the Friday night lights. They invested into us everything that they could, not only as athletes, but as young men, as well. Athletics is a huge part of making it to the next level, but making me into a responsible young man at the time was a huge help to me getting where I am today.”

So with Louisiana College grinding to get a winning season, Rhodes said most of his focus is on the team and its effort to win. But in the back of his mind, he’s contemplating the future, as well.

He said that ideally, he’d like to explore playing pro ball in some form when he graduates – the No. 1 dream of his life.

But with a business major coming upon graduation, he also knows that making a Plan B isn’t a shoddy idea either. If football isn’t in the cards, he plans to try and find a job doing sales.

“It will be difficult to play our last game this season,” Rhodes said. “I know that once I put that jersey on, it could be the last time I ever get that feeling again, and that, in and of itself, is an obstacle to overcome.

“But I just thank God that he blessed me enough to be able to make it as far as I did.For that, I will forever be truly grateful.”