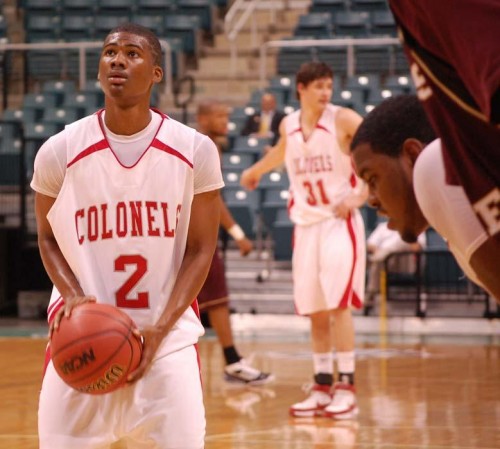 Colonels picked to finish atop the SLC

The Nicholls State men’s basketball team will likely feel the heat at the start of this season.

After a prominent run last year to the quarterfinals of the Southland Conference Tournament, Blue Ribbon magazine and Rivals.com predict the Colonels will finish the 2010 preseason toward the top of the conference – a first in J.P. Piper’s seven years as the team’s head coach.

Nicholls’ 20-11 record (12-4 in conference play) and the return of the majority of the team prompted the predicted finish.

Blue Ribbon Yearbook listed the Colonels first in the SLC East Division in its preseason forecast, and Rivals.com ranked them 98th overall, making Nicholls the only SLC program in the preseason Top 100.

And while Nicholls is happy with the preseason recognition, Piper is more focused on players keeping the proper perspective.

“I think, when you go back over the seven years I’ve been here, we’ve always been picked last or second to last in all these preseason publications,” Piper said. “The fact that we’re now being picked first is a little bit exciting, but you have to take it with a grain of salt. Those rankings don’t mean we are guaranteed of winning any games. I think it’s an indication that some people outside of our program are beginning to notice that there are some positive things going on.”

What’s yet to be determined is how well the Colonels do without the services of Ryan Bathie and Justin Payne, both of whom graduated earlier this year after stellar careers.

Piper’s adamant that the mix of those returning and newcomers should make this year’s squad ever better.

“I’ve been telling people that I think we will be better, but different,” Piper said. “I don’t think you can replace what Justin or Ryan brought to our team. They were two very special and unique players for our program.

“We’re not really looking to find someone to do what those guys did,” he continued. “We’re a new group with new dynamics and personnel. We will be a different team, but I think we can be better defensively and more efficient offensively.”

Piper said the blend should provide the Colonels with “greater depth.”

“There won’t be a Ryan Bathie or Justin Payne on the floor. The things they did we can’t just replace, but I still feel the program has taken a step forward and we will put a better team on the floor than we did last year,” the coach said.

On the heels of last season’s best-ever finish, Piper’s ultimate goal is winning an NCAA Tournament berth. Last season’s loss in the SLC Tournament opener is flaming the Colonels’ fire.

“They understand that as good as last year was, we still came up short of our ultimate goal, which was to play in the NCAA Tournament,” Piper explained. “There has been great focus and attention placed on doing more and doing better than last year.”

The recent laurels from Blue Ribbon and Rivals.com will bear little impact on the team’s ultimate goal, he said.

For the first time in J.P. Piper’s seven years as Nicholls’ head basketball coach, the Colonels are the preseason favorites to win the Southland Conference. * File photo / Tri-Parish Times