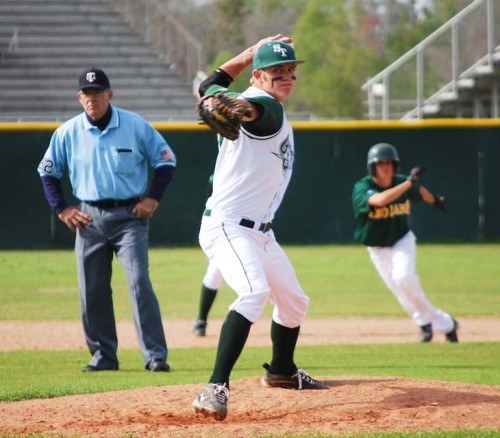 Throwing a no-hitter is statistically one of the most difficult things to do in sports.

Doing it while having your jaw wired shut? That’s darn near impossible.

But don’t tell that to South Terrebonne junior pitcher Tyler Naquin, because that’s exactly what he did in last Tuesday’s 10-0 win against Central Lafourche – the team’s first district game. The junior kept the Trojans without a hit in a complete game, five-inning shutout before the Gators mercy ruled Central Lafourche.

“I got my curveball working and my fastball following that,” Naquin said. “I just hit my spots. This is the first no-hitter I’ve ever thrown in any level, so I am definitely excited.”

Central Lafourche coach Scott Duplantis said Naquin challenged the Trojans by throwing strikes and his team wasn’t up to the task.

“He threw strikes and changed zones to keep us off balance,” Duplantis said. “He pitched inside and out… He just got it done. We couldn’t touch him today.”

Naquin broke his jaw in one of the team’s pre-district games. While squaring to bunt, the ball ricocheted off his bat and into his jaw, breaking it in three places and leaving it wired shut.

The injury was just one of many obstacles the Gators have had to face in the pre-district season.

With condemned light poles hanging over the neighboring football stadium, the team was not allowed to play home games at the start of the season.

Moving games to road or neutral venues was one of the factors that contributed to the team’s slow early season start according to the team’s coach Nathan Cotten. The Gators started the season 5-8, but have recently bounced back to .500 by winning three games at the team’s home tournament and the district opener.

“We’ve settled in,” Cotten said. “You could tell the very first time we came here, we didn’t have a routine and stuff. But we’re prepared now.”

Naquin agreed with his coach and said all the road games didn’t give the team the preparation they hoped they would have at this point in the year.

“We didn’t practice as much, and I wasn’t able to throw as many bullpens as I’d have liked to,” Naquin said. “It was definitely hard.”

One of the factors contributing to the Gators’ success has been the team’s hitting. After struggling to plate runners for the early part of the season, South Terrebonne is currently enjoying a power surge – one Cotten hopes lasts the rest of the year.

“We’re hitting the ball hard and staying on top of it,” Cotten said. “It’s not like we coach them to hit home runs, but we do coach them to hit line drives up the middle and that’s exactly what we’re starting to see.”

The Gators are looking to build on last season’s success. South Terrebonne advanced all the way to the quarterfinals of the state playoffs last year as the No. 24 seed. The team’s Cinderella run was eventually stopped short in a 12-2 loss to eventual state champion Northshore.

“We had some good role models to look up to,” Naquin said. “But now it’s our turn to grab the reigns and hopefully do the same thing those guys did.”

But after losing more than a half-dozen seniors from that team, Cotten knows it will be an uphill battle to repeat that type of success this year.

“We have six sophomores starting in the field,” Cotten said. “But we’ve played some really tough teams earlier in the year, and I think that experience is starting to pay off for us.”

The experience better yield dividends in a hurry, because the Bayou District is as wide-open as ever this season.

In addition to both South Terrebonne and Central Lafourche, Thibodaux, Terrebonne, Assumption and South Lafourche are expected to make a push for the title – which Cotten said would make for a fun spring for Tri-parish area baseball fans.

“All of the coaches in the district know that we’re all even,” he said. “Getting every W is important, and you know that you can’t take anyone lightly.”

Duplantis agreed and said the district race will be a survival of the fittest.

“I don’t think anybody’s going to win this district without a loss,” he said. “There’s just too much depth top to bottom.”