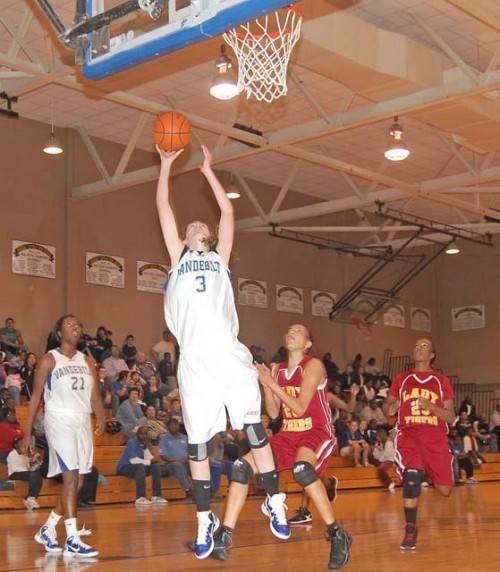 Lady Terrier from Down Under leading early season push

That doesn’t mean she’s not a world record holder.

According to ESPN, Draper has etched her place in sports history by being the youngest female player to ever play in a prep football varsity game.

At the ripe-old age of 12, Draper laced up her cleats as a seventh grader and served as Bradenton Prep’s (Florida) kicker.

But don’t let images of a teeny and tiny child playing against large young men fill your brain. Draper looked the part and fit in quite nicely playing with the boys.

“See back then, I was almost 6-foot, so it really wasn’t that big of a difference,” Draper said with a laugh. “I always looked like I fit in with the team.”

“Fitting in” is something the now 6-foot-3-inch Draper has plenty of experience trying to do in her storied childhood.

Draper was actually born “Down Under,” and recalls how different Australian life is to America.

“In Australia, everything’s a lot more expensive,” she said. “At McDonalds, you have to pay for extra napkins because they only give you one. You have to pay for ketchup. Basically, all of the things that we consider to be necessities here, cost extra there. They reuse napkins and just everything there. They reuse water. It’s really disgusting if you think about it.”

But D’Arcy said her mother didn’t like Australia, which caused the family to move to America.

Once here, the Drapers have tried their luck all across the country, relocating several different places to keep up with the demands of D’Arcy’s father’s work.

Through that moving D’Arcy said she’s learned a lot about herself and how to fit in with people of plenty different cultures.

“I think that’s all of them,” she added with a laugh. “They weren’t all in that order, though.”

As far as where Louisiana ranks on the list? As one might expect, it’s near the top.

“It’s fun,” she said. “I like Mardi Gras. I’d been visiting here for a while because this is where my mom is from, so I knew what I was in for when we moved here and I was very excited.”

With a new home virtually every year, Draper said one of the ways she made friends and connections is through sports.

In addition to football, Draper also has played soccer, as well as her current sport n basketball.

She added that she was told she had college-level potential at both soccer and basketball, but chose to continue to play basketball because of the overlap between the sports.

“Soccer was my main sport up until about last year, then I had to make a decision,” Draper said. “But I chose to play basketball. It was hard, but I’m glad I did it.”

The Vandebilt girls’ basketball program is pretty glad, too.

Since coming into the program, Draper has helped fill the void left by McDonald’s All-American Theresa Plaisance’s graduation, serving as one of the Lady Terriers’ leaders in points and rebounds per game.

And as just a sophomore, longtime Lady Terriers’ coach Kathy Luke said following the team’s recent win against Terrebonne that she’s excited about how good Draper could possibly be.

“She’s a very good post player,” Luke said. “And she has plenty of room to get better, too. She’s fit in very well with our program since she’s been here. She’s a good kid.”

Draper’s teammate Jasmine Howard agreed and said Draper has fit in with the team from the first day she arrived on campus.

“We love her,” she said. “Coming in, she had some things she needed to learn and some things we needed to teach her, but she’s caught on really quick and she gets better and better every day.”

So with two full years to go at Vandebilt, Draper said she hopes to make more history — just in a slightly different way than she etched her name into the record books the first time.

“I think I’ve decided to hang up the football cleats,” Draper said. “I think that part’s done. But I hope to do some pretty good things here for my basketball, too.”

If Draper continues to play the way she has so far, her hope might just become reality.