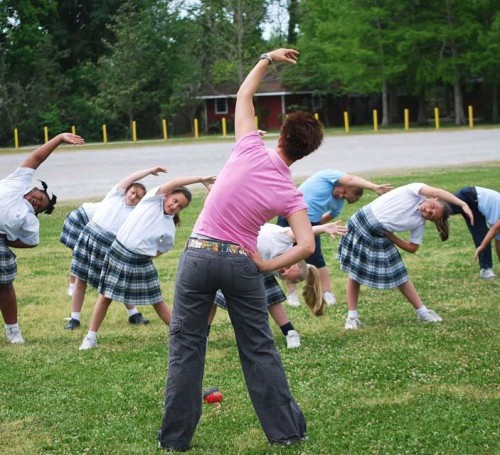 With a lot of today’s children cozying indoors to play the latest available Playstation 3 game or to watch the newest episode of SpongeBob Squarepants, exercise and healthy living are often not a top priority.

But Maria Immacolata physical education teacher Becky McManus is seeking to change that.

In her first year with the school, McManus has revamped the school’s P.E. program and has pushed her students to seek a healthier lifestyle.

A positive change in the lives of the school’s nearly 200 children.

“It’s such a problem with kids being inactive,” McManus said. “So I wanted to start a whole new wellness program with them. And they’ve really taken to it. The kids come to school everyday and ask me ‘What are we going to do today, Mrs. Becky?’ So it’s been amazing to see their interest.”

McManus has always been interested in physical fitness, holding a background as a swimmer growing up. She also takes part in triathlons throughout the year.

But as a mother of three, she said she always wanted to change the living habits of our youth with childhood obesity on the rise.

The issue hits even closer to home for McManus as her 7-year-old son has diabetes, making a healthy lifestyle an even higher priority for her family.

“The things our children do now aren’t nearly the same as they were when I was growing up,” McManus said. “So I’m just trying to keep them active and healthy.”

Upon arrival at the school, McManus divided every student, pre-K through seventh grade, into four groups – a red, green, yellow and blue team.

Throughout the course of the school year, eating challenges and exercise challenges allow students to tally points for their teams. This makes for a school-wide competition and most importantly – it allows the participants to keep up with their school lessons when they’re at school.

“That’s the most important thing, that they take these things home with them,” the teacher explained. “And what’s so thrilling for me is how motivated the students are to do the challenges. There is no grade for P.E. at Maria Immacolata. I have no leverage. They are doing this and taking the initiative on their own. That is so fulfilling to me.”

Aside from the challenges and the competition, inside of each P.E. class on a typical day, the students play games varying from “Octopus Tag” to softball – anything to keep the kids in motion and free from the other strains of their typical school day. On rainy days, the teacher teaches nutrition.

“It’s an outlet for them,” she said. “It’s a time of the day when they can come out and be free of everything and just have fun. And it’s funny, because even around the neighbor, I look outside and I see some of the kids outside organizing their own Octopus Tag games.”

So far, the student response to the teacher’s initiative has been “great,” and two sixth graders even went the extra step recently to promote physical fitness.

Alexis Boudreaux and Payton Miller formed the H.A.F (Health and Fitness) Time Club and had their first meeting on April 16.

Boudreaux said after being a part of McManus’ class, she and Miller wanted to do their part to also reach out to children in the name of fitness.

“We thought it would be pretty fun to teach other kids and our classmates about stuff like that,” Boudreaux said.

The students said the idea came from a random telephone conversation where they were talking about how much fun they had in McManus’ class.

“We were just talking on the phone talking about it and we just saying, ‘You know, we should start a club for Mrs. Becky,'” Miller said. “So we started coming up with names and we sent out a survey to the teachers to get the club motto and the club name, so that’s how it started.”

The teacher said one of the goals the group will try to tackle is to provide healthier snacks for students at recess.

“The things we have now are like Skittles or other candy,” McManus said. “So I told them they should bring things like apples or yogurts out there to try to raise money for the club, and they did, and sold out.”

But while McManus is always stepping up to stress fitness, even she will be the first to admit there are times to allow “kids to be kids.”

“I’d never tell a kid they can’t have the candy or the other things they love,” she said. “Just as long as they eat something healthy after to go with it.”

She said she’s just trying to find a balance between the two spheres – something she hopes other schools will adopt in the future.

“P.E. should be about more than walking around a track,” she said. “Our departments never have funding with the cuts, but with a little creativity, you can make an impact on a lot of people’s lives.”