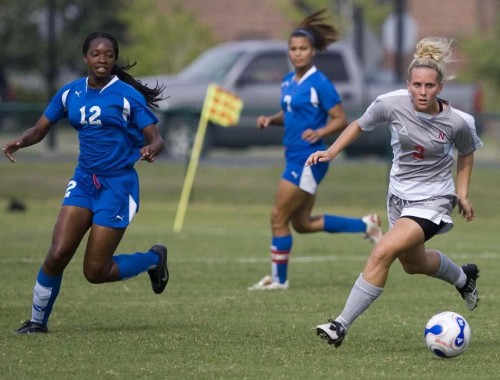 When Bracebridge, Canada, native Kaity Mattsson took up soccer at age 6, she never dreamed 14 years later she would be a part of Nicholls State’s sports history.

She’s not only a member of a team that has tied the record for most number of wins in a season – she’s also made a little history of her own.

In the 10th minute of the Lady Colonels’ Sept 20 game against Texas Southern, Mattsson scored her 18th career goal, breaking Kim Robinson’s record of 17, which dated back to 2000-04.

Her goal in the 21st minute, the 19th of her career, added a little lagniappe to the record that is now officially hers.

Even though Mattsson broke the record, it still might not be her most impressive stat, according to her coach.

The fact that she did it in three years and still has one more year to raise the record makes it that much more impressive, according to first-year soccer coach Dylan Harrison.

“The credit obviously goes to Kaity and her teammates to put her in those positions for her to go ahead and do something like she did,” the coach said. “It’s a young program, but for her to be able to come in and not only break the record, but break the record with a year left in her career is special.”

Mattsson’s three-goal spree against Alabama A&M on Sept. 11 put her at 17 goals to tie the record.

“When I scored it was like, ‘Ok, now it’s mine,'” Mattsson explained. “It’s really exciting because I still have another year. This team has come such a long way and I couldn’t have done it without having the improved coaching or this team.”

In her three years as a Lady Colonel, Mattsson’s stats have climbed each year. As a freshman in 2007, she scored a team-high four goals on the season.

She followed that performance up in her sophomore year by leading the team in points (16) and goals (eight).

So far this year, Mattsson has already scored seven goals and has 15 points through only eight games played. Mattsson attributes the improvement in her game this season to Harrison coming aboard as Nicholls’ coach.

“I can see the field a lot better now,” she said. “My vision is stronger and I’m smarter.

“(Dylan) is really knowledgeable, he really knows what he’s doing,” Mattson continued. “He works us. He taught me a lot already and he has only been here a month. I’ve learned so much. Soccer is more enjoyable for me now.”

Harrison said Mattsson has emerged as a team leader on the field – not just because of her play.

“She’s a leader in the sense that she wants the ball. Other schools are going to look at her and see her as a threat so even in games she isn’t scoring, she is still drawing one or two of their best defenders and it’s going to give some other players some opportunities to score as well,” he said. “I think she does a good job of leading by example, working hard and doing what she has to do.”

The record Mattsson’s proudest of is not her own; it’s the team’s matching the most season wins – three.

Winning, she theorizes, has spawned the team’s best performance. And it comes just in time, as Sunday’s game starts conference play.

“Everyone has a better attitude,” Mattsson said of the team. “They all want to be here and they are all working toward the same goal. The coaching makes a difference.

Harrison said it is up to the team to achieve this year’s goals. He expects to look to Mattsson to be a leader on the field.

“It’s great for her to be able to accomplish what she has while she’s been here, but it’s proof that she is someone we can look to in the future for her to go ahead and keep doing what she is doing,” he said. “The team has a better attitude and commitment and continues to get better every day. They are working hard for each other. You can see that they care about each other. It’s given them a chance to prove themselves in every game we play.”

Junior Kaity Mattsson (right) etched her name in the Lady Colonels’ record book by breaking the school record for most goals scored. With a year left she looks to continue to add to her 19 career goals. * Photo courtesy of MISTY McELROY/NSU