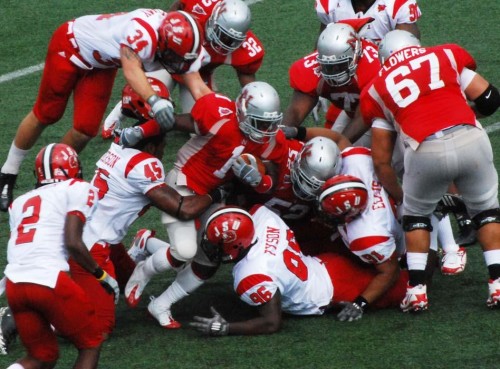 One homecoming was ruined, while another left others in awe Saturday.

Jacksonville State quarterback Ryan Perrilloux showed exactly why he was the top recruit in the state when he came out of Reserve’s East St. John High School in 2005.

The former LSU Tiger scorched Nicholls State’s defenders, outrunning sacks and shaking off pressure as he threw for 250 yards and four touchdowns and accumulated another 86 yards rushing with a score, leading his Jacksonville Gamecocks to a 60-10 win over the Colonels.

With family, friends and supporters looking on at Nicholls’ Guidry Stadium, the quarterback used fancy footwork to dodge Nicholls’ defense and move the Gamecocks down the field time and again.

Perrilloux’s 38-yard touchdown run in the fourth quarter was the longest of his career. Nicholls, too, made the record books with Saturday’s performance – the 50-point loss tied for the Colonels’ worst at home.

Perilloux’s first return appearance on a Louisiana football field since leading the Louisiana State University Tigers to the 2007 National Championship proved to be distraction-free despite all the hype prior to Saturday.

Many speculated on his commitment, especially given the off-field antics that ultimately led to his expulsion from the Tigers’ football team.

“Just to be a part of this football team is very different from where I came from, but just to be back here and have a showcase like this was good for me, the football team and this program,” he added.

Although Perrilloux erased all worries as the game went on, Gamecocks head coach Jack Crowe said he was nervous at the outset of the game.

“I always had great respect for the quality of football down here. It’s always some of the hardest hitting football,” Crowe said. “I thought we were in a very dangerous situation coming down. Ryan told me a couple times on Friday, ‘We’re going to be alright, coach.’ Luckily, we didn’t fall into the trap Central Arkansas and McNeese did last season.”

Crowe admitted that having a player like Perrilloux has been “special” – not just because of his play on the field.

“He loves the game of football,” the coach said. “These guys respond to him. He’s a great player and he showed it tonight. He’s not perfect, but then again, no one is.”

On the flip side of the ball, the Colonels did little to help themselves.

Thomas blamed his team’s youth, but said mistakes must be corrected over this week’s bye.

“We had opportunities, but (Perrilloux) made the plays when he needed them and we didn’t,” Thomas said. “We’re a very young team. We’re battling a lack of depth on the defense and a lack of production from the offense. You would think things would get better from week to week, but we didn’t show that today.”

The Colonels’ offense proved defenseless, gaining only 210 total yards. Despite having one of the most prolific offenses over the last several seasons, this year’s team has failed to find its stride.

The offense has yet to put together a 300-yard game this season, a cause for concern for a team that normally leads the conference.

“We feel like we can’t get a break,” senior linebacker Yashua Willis said. “But we can’t quit. I don’t care if teams score 100, football is four quarters and we are going to continue to fight through it.”

The Colonels will go back to the drawing board with an off week. Thomas plans to use the time to heal players’ wounds and reevaluate personnel.

“The bye week comes at a good time,” Nicholls’ coach said. “The first three weeks have been a grind for these guys. We are going to use this time to get healthy and look at everything. It’s time to do a little re-evaluating and figure out what the problem is. We can’t keep having performances like this.

“But it’s a new half the season now, we’re starting over in conference,” he added.

Freshman quarterback Jake Witt, who was the Colonels’ second leading rusher with 24 yards, agreed that the off week is what the team most needs.

“We have to figure out ways to stop killing ourselves when we get the ball,” Witt said. “That’s something that we have time to address now with a bye week. Jacksonville State was a great team but so are the teams in our conference. We can’t look back.”

Nicholls running back A.J. Williams is swarmed by Jacksonville State defenders in the Colonel’s 60-10 loss to the Gamecocks Saturday. * Photo by KEYON K. JEFF