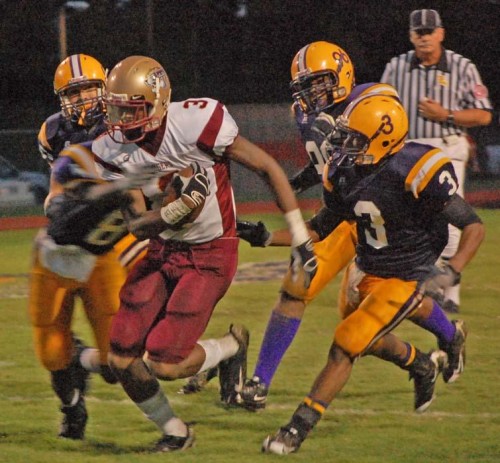 Friday proved different things for the Thibodaux and Terrebonne Tigers.

For the Thibodaux Tigers, the 38-14 win showed they are still the cream of the crop in the district, as Terrebonne was considered one of their biggest challenges.

Terrebonne learned, on the other hand, that they still have some work to do with six games remaining this season.

But for both teams, the game proved that once again the district race is wide open.

Second-year Thibodaux head coach Dennis Lorio said the game’s outcome was a testament to his defense, which held Terrebonne scoreless the entire second half.

Despite giving up two early touchdowns and trailing 14-7 after the first quarter, Thibodaux’s defense responded, keeping Terrebonne quarterback Mike Williams and his high-powered offense in check.

“Over time, we got adjusted to their speed,” Lorio explained. “We don’t run that kind of an offense so we can’t simulate it. They did a nice job with it. Coach Hill has that Terrebonne team on the rise and they’ll be a playoff contender.”

Lorio said Friday’s matchup was “the game of the year” for his team.

“When we started practice in August, this was the game we looked to.”

He was equally pleased with his offense, which rushed for 363 yards.

“We did some good things up front, which allowed us to get some runs, and Trovon Reed was able to do some play action,” Lorio explained. “We don’t know where he’s going. The offensive line can’t block for him because they’re blocking guys one way and (Reed’s) going the other way. We’re blessed to have a kid like him. He puts us in position to be able to win.”

“It definitely helped that we played those tougher teams,” Lorio said. “The kids knew how to respond when we fell behind because we did it in all three games before this one.”

Thibodaux will have to dig deep again this week, their coach said, to pull off a win against the South Terrebonne Gators.

Meanwhile, Terrebonne head coach Gary Hill hopes to use the district-opening loss as a lesson for his young team.

Terrebonne came out fired up early on and took the lead in the first quarter, but lost their composure and made too many mental mistakes – something Hill said they must avoid repeating.

“The first half defense didn’t play well,” he said. “I don’t think we’re a bad football team; we just have to mature a little bit. We had two good drives; we just didn’t finish. Like I told the kids, we are going to assess where we are now that the game’s over. We’re hoping to make the playoffs and, if they do their thing and we do ours, maybe we play again. We’re young, we have to grow up and learn some discipline.”

Quarterback Mike Williams and receiver Jerrod Brown sparked the offense, connecting on touchdowns of 49 and 48 yards, the only points scored for the Houma-based Tigers.

“It’s only one game,” he said. “There is tons of football left to go this season – six games left. We have to focus and take care of business. We can’t let this stop us where we were going. We have to look at this and grow from it.”