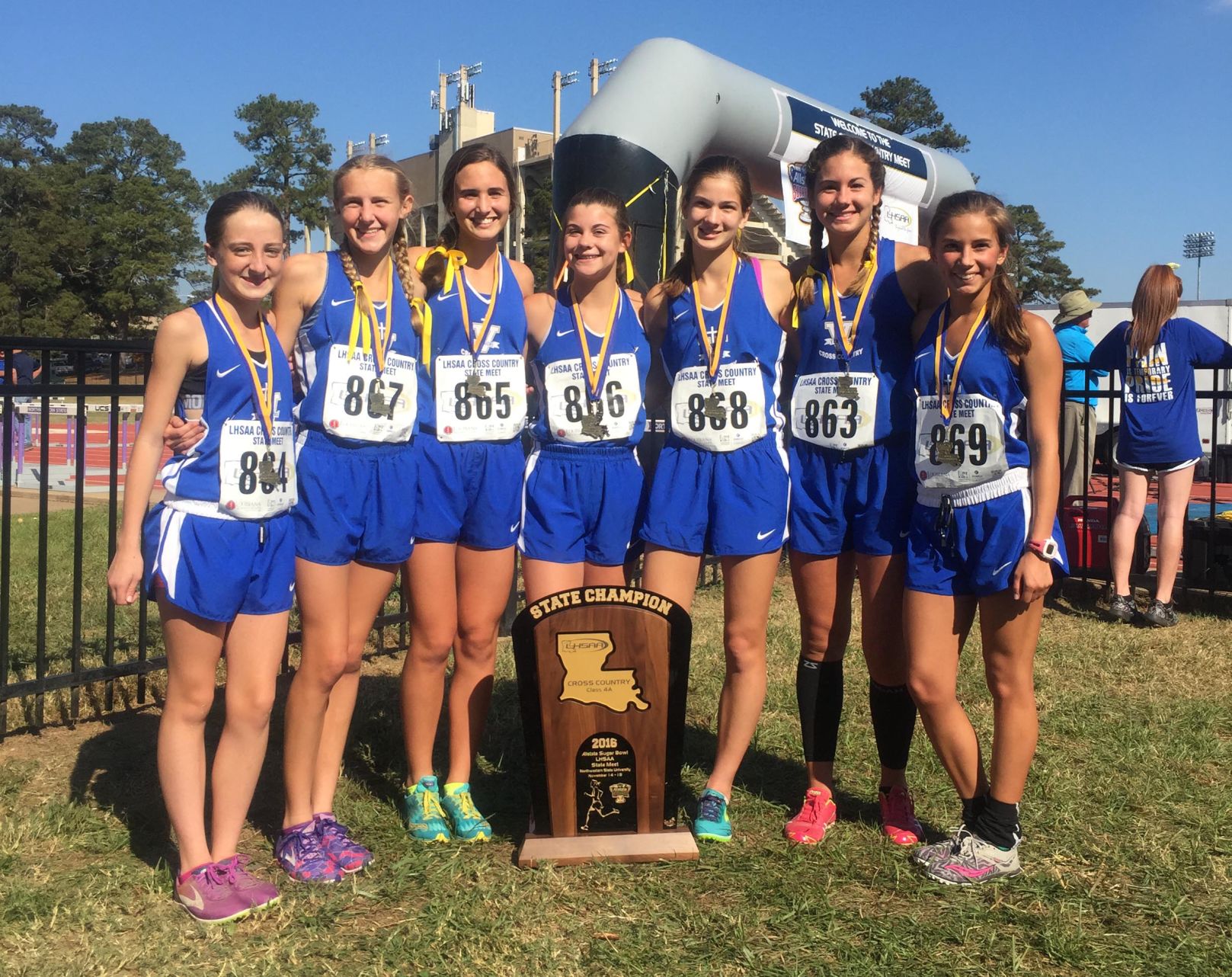 This time, they took the next leap forward and won it all.

The Lady Terriers won the Class 4A State Championship this past week, dominating the competition at the LHSAA Cross Country Championships with a team score of just 28 – enough to easily outlast runner-up St. Michael.

The victory was sweet for Vandebilt because it avenges the runner-up finishes the team had posted in the past few years.

“It was a great day,” Vandebilt cross country coach Dave Malone said. “There is nothing like winning your first state championship, not only personally, but also it’s our first cross country state title in school history. The girls were spectacular. … Our girls proved that they are champions by running with no holds barred passion and grit. They saw the title on the horizon and they went and won it.”

They victory was won with a total team effort – a dominating level of consistency that overwhelmed everyone else in the field.

In cross country, a team is allowed seven runners.

From there, the top five participants on each team are counted toward a school’s overall score.

That score is accumulated by adding the finishing position of all five scored runners, with the lowest team score winning the meet.

At the championships, that was Vandebilt, and it wasn’t even close.

All seven Lady Terriers who ran the meet finished in the Top 26 (out of 124 runners) of the individual race. Once trimmed down, the five individual times that Vandebilt counted were all in the Top 10, which put the race away with little doubt.

Malone said Vandebilt was motivated after losing by more than 30 points to St. Michael last year at the LHSAA Championships – a meet the Lady Terriers thought it had a real chance to win.

He called the performance of his runners one of the most thrilling things he’s ever seen in sports.

“I was cautiously optimistic that this year would be the one for us,” Malone said. “We proved early on in the season at the Baton Rouge meets that we were one of the best teams in the state. But going into the state meet, I noticed that St. Michael’s had been putting up great times, so we were a little nervous that history may repeat itself. But our girls were determined to not let that happen.

“From the gun to the finish, they dominated. It was the greatest moment of my coaching career watching those girls dominate.”

But the Lady Terriers had strength in numbers – a whole cavalry behind Lindsay, which allowed the team to win the title.

Rounding out the Lady Terriers scoring were senior Eleana Callejas and Amelia Viator, who finished eighth and 10th, respectively.

Malone said he watched the meet from the bleachers, and there wasn’t ever any doubt. At about the two-mile mark, he said he knew his team would need to do something wrong to lose.

As the first runners crossed the finish line, he said the team’s fate was sealed – and everyone knew it.

“I could see it coming,” Malone said. “I knew we had won even before the scores were totaled. That’s how well our girls ran that day. They never gave the opponents the chance to overtake them. For us, this was not last year. This was a new year and a new team, and the girls reached out and took their prize.”

The future is bright, too.

Callejas is Vandebilt’s only senior runner, which means that all six of the other competitors will be back next year.

But looking at the results from the race show that Vandebilt will still have to keep pushing, because everyone else is young, too. There were only four seniors who finished the Top 20 of the race.

But Malone said the team will worry about next year some other time, because at least for a couple days, they’re going to enjoy their big win, and rightfully so.

They left no doubt this past week that they were the state’s best team.

“We expected to do well,” Malone said. “But I don’t think we expected to dominate, putting five runners in the top 10, not to mention having one of our eighth graders winning the whole thing. … It was a great day for our program and our school.” •