My chance to humble brag 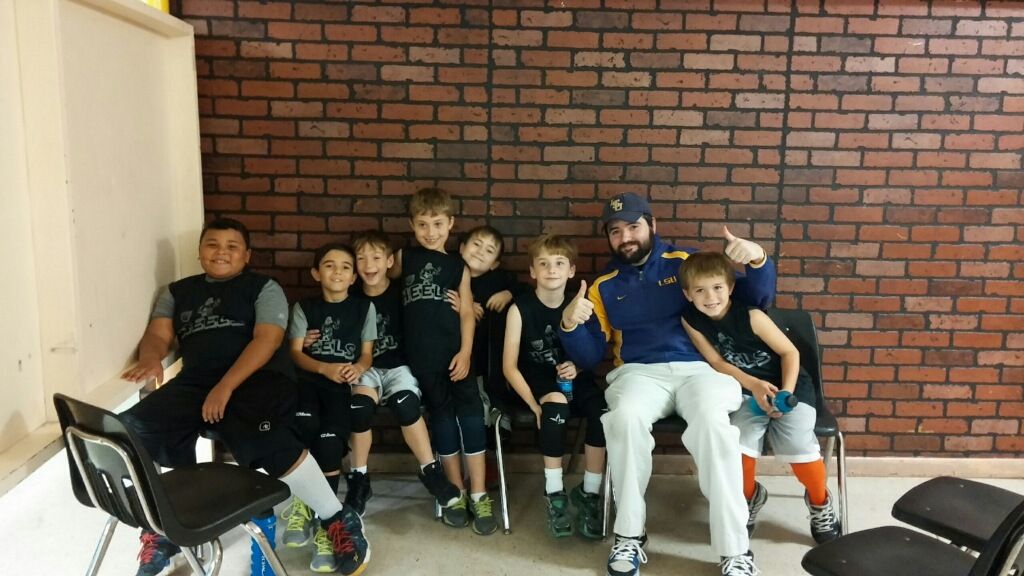 Electricity filled the Cut Off Youth Center’s air two Sundays ago in anticipation of the big basketball game about to be played.

On one end of the gym stood seven young man clad in red tops laced with black trim. The Born Ballers were their name – an undefeated group of young local Biddy Basketball players led and coached by former South Lafourche state champion Ashton Dillon and his assistant coach Damien Adams – a guy who knows more about Biddy Basketball strategy than most people could ever dream to know, truly one of the better youth coaches in our area.

The Born Ballers weren’t born too long ago, to be exact. They are in the U8 age group within South Lafourche Biddy. For those not familiar with the basketball lango, U8 means that the players on the floor have to be 8 or younger.

The guy doing most of the scoring for these Born Ballers is a fellow by the name of Victor Nelson – a young man with loads of potential for the future. But his teammates are filled with heart as well, guys like Bryce Adams, Rocky Danos, LeBron Dillon, David Dillon and several other contributing members.

They are a heck of a team, and everyone in the gym on that day knew it’d take a heck of an effort to knock them off.

But if anyone could defeat this Herculean U8 squad, it’d be their opponent on this Sunday – hence the anticipation.

On the other end of the floor were eight boys dressed in black tops with the word HEELS glistened across the front in shiny silver. Those kids were also undefeated. They are coached by Damien St. Pierre and yours truly.

Led in the scorebooks by Evan Louviere (a former Times Player of the Week) and Nick Coleman, the Heels entered the game peaking at the right time thanks to contributions from guys like Gage Melancon, Ashton Guidry and Merrick Dufrene. Don’t forget Beric Rivet, Tyler Sanders and Alex Friedlander either – players all capable in their own ways.

The game started with a bang for my side. The Heels went up 4-0 on a couple early buckets. We rejoiced as Ashton Dillon called a quick timeout to regroup.

He was the one laughing next.

Out of the timeout, the Born Ballers showed their pizazz, dominating the rest of the quarter to take the lead.

We prepared for an onslaught from Nelson and Adams, but it was young Rocky Danos that was eating us up with a slew of mid-range jumpers from the paint – a testament to the depth of our foe.

“You guys having fun yet?” Coach St. Pierre said during the first quarter break.

It was the first time all season our little group had been down at the end of a quarter, and quietly I wondered if we’d wilt to the pressure.

I was wrong. We dominated and thrived in the chaos.

The second and third quarters were all ours. We dominated the pace and tempo to take a 10-point lead. Nick Coleman hit three-straight 3-pointers in the onslaught.

The first shot was wide open. The other team begged Nick to take it. The second was a little more guarded, as the Born Ballers had learned their lesson.

The third shot was in traffic over multiple defenders. I didn’t think it had any chance to go into the basket. It did, gently kissing the front of the rim before bouncing softly into the net for three more points.

The gym was absolutely on fire. Who ever could imagine an 8-year-old kid making that many outside shots in a row – much less against a team as good as the Born Ballers? He had the entire building eating out of his hands. And he knew it, too. The smile on his face as he jogged down the court said everything.

We held our double-digit lead into the fourth quarter and it looked like smooth seas were ahead, and we’d coast to victory.

And then Nick Coleman fouled out and the plans completely changed.

“You played your butt off, buddy,” I told Coleman as he walked to the bench with his head down after getting his fifth foul. The look on his face told me he wanted to cry out of frustration but didn’t want to shed a tear in front of his teammates.

With as well as he had played on this afternoon, there was certainly nothing to be ashamed of.

“Keep your head up, Nick,” Coach Damien replied back. “We’re going to win this one for you.”

It wasn’t easy, but we did just that.

Without our big man, the Born Ballers feasted, cutting our lead from 10 to two in a flash.

They pressed us in the final minutes and made life miserable. The final two or three minutes of the game felt like an eternity. It was like time stopped and we were going to just keep playing until they took the lead and dashed our hearts.

But through the trouble, we made just enough plays to hang on and persevere.

Little Evan Louviere made the dagger – a late layup to give us a four-point lead. It was a layup that was the final bucket in a tense, drama-filled game.

But the true heroes were guys like Gage Melancon and Ashton Guidry – guys who dribbled the ball up the floor for us for the first times this season after the Born Ballers pressed Louviere and took his ball handling skills away.

Or what about Tyler Sanders? He made his first bucket of the season in the win and played vital defense on Nelson, stopping a few breakaway layups.

As the teams lined up to shake hands, fans for both teams applauded the effort for the kids – the true stars of the day.

“That’s what it’s all about,” Dillon said to me as we shook hands. “We put on a show. Those kids will remember this for the rest of their lives.”

I love coaching Biddy Basketball. It’s truly one of the most fulfilling things that I do.

To be able to take a young boy/girl and introduce them to a sport is an amazing feeling.

Sure, Coach Damien and I’s team is undefeated and playing well, but a lot of hard work has gone into that success.

We work hard and dedicate a lot of time to foster those young men’s talents. Off the court, we encourage them to practice, study the game and do anything they can to get better.

The kids are the true stars of the show, because they take our advice to heart and show up to each practice ready to learn and to each game ready to compete.

And at the end of the day, that desire to compete and grow is what it’s all about – not the win or the loss.

The Born Ballers were not losers on that day. They won just as much as we did.

They competed, spilled their guts on the floor and came up short. Their effort was admirable and every boy on that team left the floor a winner.

To me, that’s what it’s all about – creating a positive environment for the little guys and encouraging them to get better.

Myself, Coach Damien, Coach Adams and Coach Ashton did that two Sundays ago on the Cut Off Youth Center gym floor.

The end result was a little bit of magic – a jolt of electricity that myself and those boys will remember for the rest of their lives.

When coaching a youth sport, there’s nothing better than that.

Pictured are several members of the U8 Biddy Basketball Heels – a team coached by The Times’ Sports Editor Casey Gisclair. Casey shared his thoughts on coaching Biddy this week, touting that he loves sharing his passion for sports with the next generation.