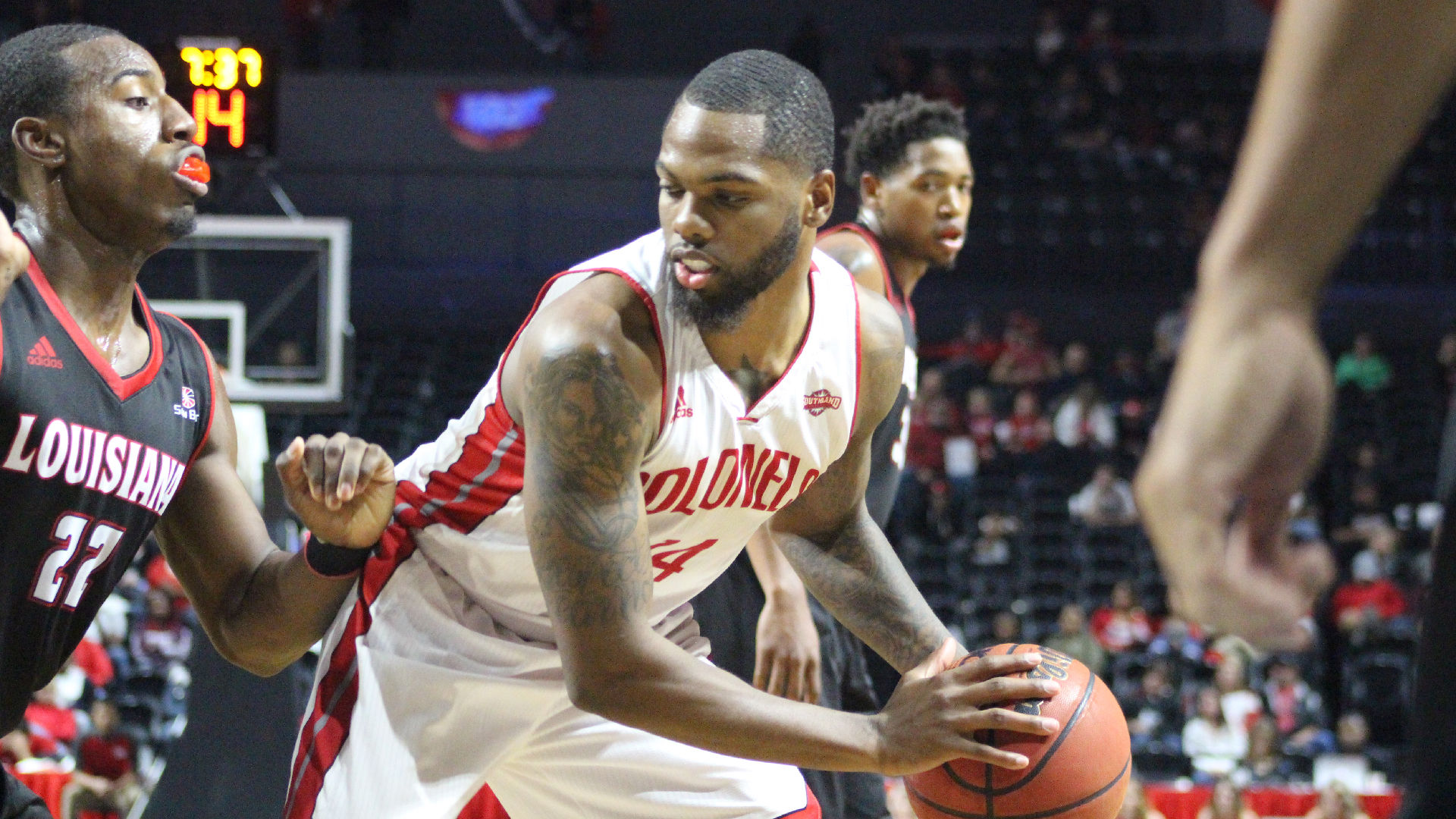 The Nicholls men’s basketball team needed a good week, and they got it.

Now, the focus is on taking that momentum and finishing the season with a bang.

The Colonels went 2-0 this past week, scoring a 77-68 road win at Incarnate Word on Thursday night, then a 77-71 home triumph over Southeastern Louisiana on Saturday.

The victories improved Nicholls to 14-15 on the season and 7-9 in Southland Conference play – a tie for eighth place in the parity-stricken league.

The consecutive wins set the stage for the Colonels to make up more ground in the standings in the final week of the regular season before the Southland Conference Tournament.

Nicholls travels to play Lamar on Thursday, before hosting UNO on Saturday. Depending on the results of those games, the Colonels could finish as high as fifth or as low as 10th or 11th in the regular season standings.

“We have to keep going,” Nicholls coach Richie Riley said after the win against Southeastern. “We have a lot to play for in the final games of the year. Our guys are giving us everything they have, and we’re really proud of the way we’ve battled here in these last few games.”

The Colonels won a pair of nail biters this past week.

Against Incarnate Word, the Colonels fell behind early, trailing 35-33 at halftime.

But in the second half, Nicholls’ balance showed through.

The Colonels had five scorers in double figures in the win, led by Jahvaughn Powell and Jonathan Bell, who had 18 and 17 points, respectively.

Australian-born 7-footer Liam Thomas was also huge, posting a triple-double. The long, massive senior had 14 points, 13 rebounds and 10 blocks in the win.

But the Cardinals made a run, scoring 10-straight points after Nicholls’ early flurry to make the score 57-52 with 7:29 to play.

But Nicholls never panicked down the stretch, ending the game on a 20-7 spurt to seal the win.

“That was a great team win,” Riley said. “We got contributions from everybody. Our whole team played. We just fought, man. We made play after play after play. We had some miscues that we’d had in the past that caused us to fold up in some of these games on the road that we’ve lost … but tonight we didn’t let it stop us. We just fought a way to fight through it.”

The Colonels did much of the same a couple days later against Southeastern.

Nicholls led that game 42-35 at halftime, and overcame a late Lions surge to secure a hard-fought, much-needed home victory.

The Colonels were red-hot from the field against Southeastern, shooting 52 percent from the field, while also making 12, 3-pointers. Nicholls also was 17-of-19 from the line, which came in handy late in the game with the Lions surging.

Senior and Thibodaux native Ja’Dante Frye was huge in the win, scoring 21 points off the bench (6-of-7 shooting, 3-of-3 from the 3-point line). Fellow bench player Lafayette Rutledge was also strong, recording 18 points in 23 minutes of action.

Thomas didn’t get a triple-double against the Lions, but again controlled the paint. He had 8 points, 8 rebounds, 4 assists and 5 blocks to help key the victory, which helped Nicholls avenge a 72-44 loss at Southeastern earlier in the season at Hammond.

Now, the Colonels have momentum, but they also have a very challenging week ahead.

Against Lamar, Nicholls will be facing a team that’s 8-8 in Southland play – just one game ahead of the Colonels. But the Cardinals beat Nicholls 87-76 in Thibodaux earlier this season – the Colonels’ most lopsided home loss this season.

Nicholls is currently tied with Abilene Christian for eighth place in Southland play. But with another 2-0 week, the Colonels could easily jump several spots, because there are six teams in the middle of the standings that are separated by just two games.

The past few weeks have been tough for the Nicholls’ women’s basketball team.

The Colonels entered Saturday’s game with Southeastern Louisiana having lost five-straight games – all by single digits.

The setbacks dropped the team from the top-half of the Southland standings to the bottom-half – a rare place for the Colonels since the program’s turnaround under coach DoBee Plaisance.

But on Saturday afternoon, Nicholls exploded, taking out all of their frustrations on the Lady Lions.

The Colonels crushed Southeastern 92-57 on Saturday, using 46.3 percent shooting from the field to secure the comfortable win.

Five Colonels scored in double figures in the win, led by Vandebilt graduate Cassidy Barrios, who had 21 points and 11 rebounds, as well as 4 assists.

In the finale, Nicholls will take on UNO, which sits at 8-8 in Southland play.

The Lady Privateers are led by Houma native Randi Brown, who is one of the best scorers in the country.