Drink it in, Coach! Tigers roll in Orgeron’s debut

Philp trades cleats for clipboard in 2016 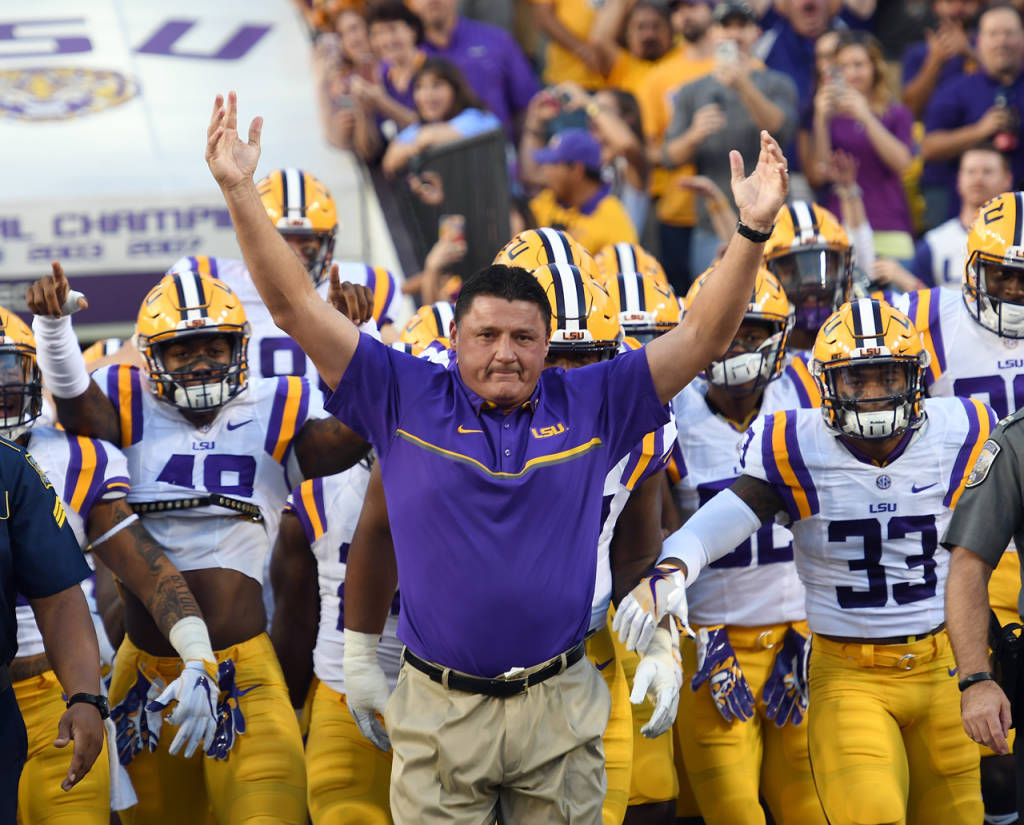 Between prep football entering district play, the LSU coaching saga, Nicholls football being revitalized, the Saints being a mess and the start of the NBA season drawing near, I am on a complete information overload.

So instead of picking one topic and abandoning all the others, I decided to have my cake and eat it, too.

This week, I did a mailbag. I collected questions from folks on social media and decided to offer my column space for some spirited discussion.

I plan to do this mailbag monthly, so hit me up on Twitter @casey_gisclair. I love to interact with sports fans around the world.

Q. How many games does Ed Orgeron need to win to keep the LSU football job full-time? Asked by Matt Champagne and several others throughout the week

A: This is the question I’ve been asked most throughout the week, and I honestly don’t know the answer. I can state with almost 100 percent certainty that LSU decision makers don’t want Ed Orgeron to be its next coach. They want to make a splashy hire like Tom Herman, Jimbo Fisher or someone that’s sexy around coaching circles. That’s obvious. But Orgeron is approaching this gig like he’s here to stay, and can force everyone’s hands if he has some on-field success. I say if he goes 7-1 and beats Alabama, the job is his. If he goes 7-1, but loses to Alabama, they turn the other cheek. If he goes 6-2 and beats Alabama, it might come down to what vibes Herman and those other guys are sending Athletic Director Joe Alleva at the end of the season.

Q. If you were Joe Alleva, who would you hire? Asked by Chip Andras

A: In a vaccum, it’s tough to say, because I don’t know who’s interested. But assuming that the established guys like Urban Meyer and Nick Saban aren’t available, and assuming that all of the rumored names are actually available, it would be hard for me to say no to Herman. He comes from the Urban Meyer coaching tree, and has had success literally everywhere he’s ever been. To me, he has to be 1A. If he says no, then I’d turn next to Bobby Petrino. He’s unpopular to a lot of fans, but has won literally everywhere he’s ever been within the college ranks. And heck, at this point, I wouldn’t even necessarily be opposed to Orgeron getting the full-time gig. It’s likely not ideal, but did you see the energy LSU had on Saturday?

Q. What LSU candidate would disappoint you the most? Asked by Douglas Moore

A: Lane Kiffin. No doubt. I don’t want anyone in the Nick Saban coaching tree. Those guys don’t succeed because of anything they’re doing right or wrong. They’re succeeding because a football genius is over them. Art Briles is on that list, too, but I don’t even consider him to be an actual candidate, so I don’t consider him my answer.

A: I’m going to make you happy, TigerPride, because I think it’s Thibodaux. It’s either them or Central Lafourche … or maybe even Vandebilt. OK, I admit, I have no clue. If someone puts me on the spot, I say Thibodaux, because I think Amik Robertson is hands-down the best individual player in the area for 2016. But on any given night, I think any of those three teams that I just mentioned can beat anyone else. There’s just something about Thibodaux, though. Those guys always find the way to get that big, game-changing turnover when they need it most.

Q. Is Nicholls football for real? Can they make the Football Championship Subdivision Playoff? Asked by Sheila Collins

A: Who am I to say no? Of course they are for real. The Colonels almost beat Georgia and then took South Alabama to overtime. I think Chase Fourcade has been an adrenaline spark the program has needed, and there’s no doubt that Nicholls is one of the top teams in the Southland Conference if they can stay healthy. I’d like to see the Colonels find a spot for Tuskani Figaro in the back-end of the season, though. It’s a shame to see a 1,000-yard rusher go completely unutilized. I know the Colonels lost to McNeese State on Saturday, but they’ve proven that they can compete with anyone. Down the stretch, I expect them to be a player.

Q. I know you’re a South Lafourche homer. What’s going on with your Tarpons? Asked by Larry Young

A: Woah now, hold on for a second, Larry. Homer? What’s that all about? I think I’m just a proud alum who loves to show his support to the place that molded me into an adult. OK, I guess that does make me a homer, doesn’t it? To answer your question, the Tarpons are young and are learning how to win under a first-year coach. They’ve had some tough losses, yes. But they’ve also played a murderer’s row of non-district opponents. Once district play rolls around, they will be OK. Brandon Nowlin is a good coach, and he knows offense. They will score plenty enough to win their share of games down the stretch. That begins Thursday night when they crush Morgan City and get to 1-0 in District 7-4A play.

Q. Can the Saints be fixed? Asked by WhoDatTommy

A: In their current form, no, they can’t be fixed. Their roster has too many holes, and by the time the adequate fixes are made, Drew Brees will be 40 and off to the golf course. The Saints are heading toward a dark place right now, and they may be in for a rough half-decade or so. Their roster stinks, their quarterback is aging, they have limited cash to offer replacements and their general manager hasn’t made a good decision in about three years. It’s not paper bag time just yet, but it’s getting close. The next time the cashier gives you the option, go with paper – just in case.

A: In terms of performance on the field, it would have to be Houma native and pro baseball player Justin Williams or NFL standout Greg Robinson. Very rarely do journalists get to cover folks with that special level of talent. If we’re talking just sheer personality, I’d probably have to go with former Nicholls women’s basketball player Jasmine Hoskins, who was one of the first Colonels to ever graduate from the school’s nursing program while competing as a starter for Nicholls’ team. I saw a lot of Jasmine’s struggles first-hand, and to me, that was one of the coolest things I’d ever seen in this gig.

Thanks for the questions, dudes and dudettes. We will do this again, soon!

Keep the questions coming. If you don’t do Twitter, email me at casey@rushing-media.com. •