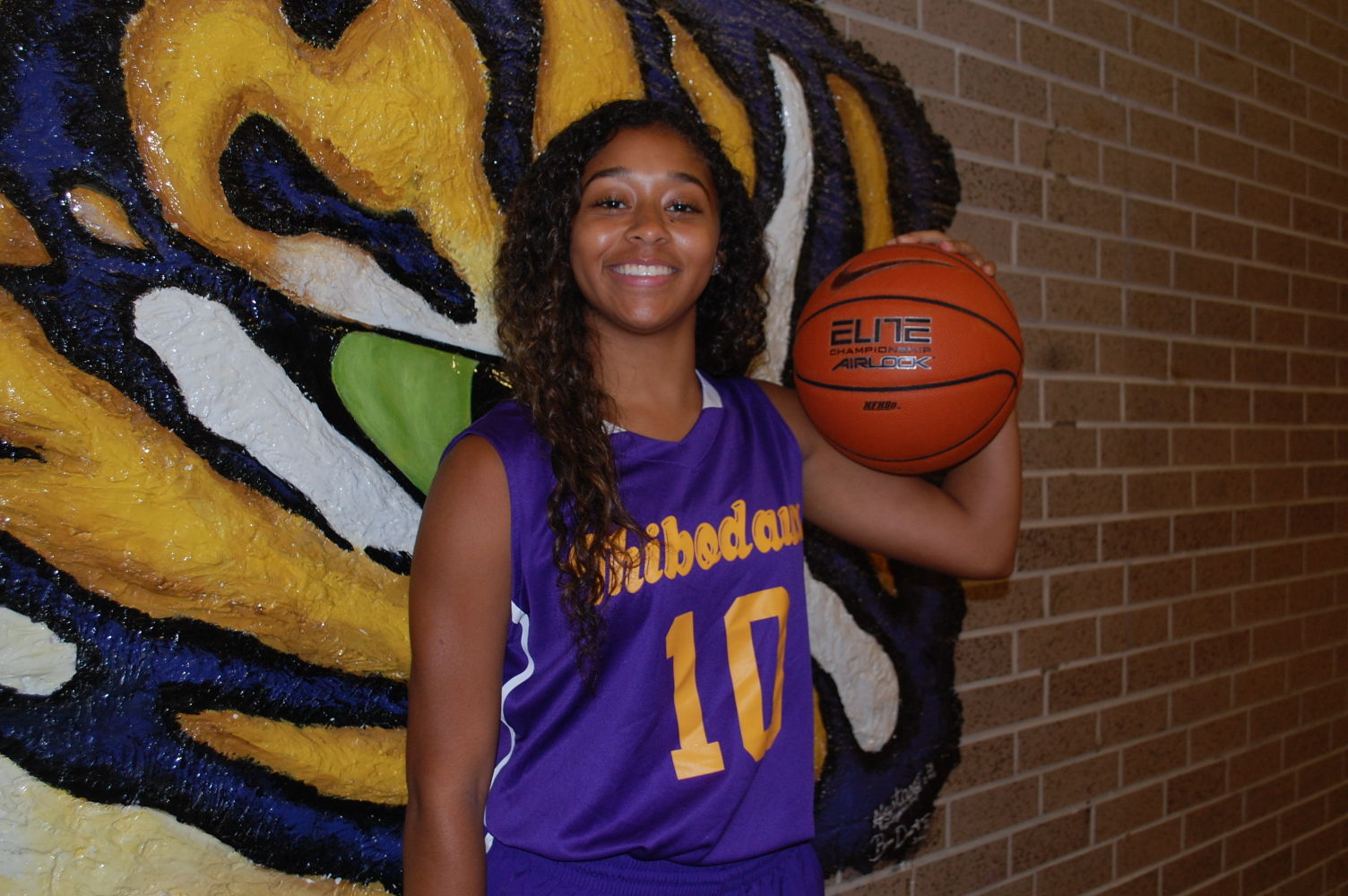 On the court, she’s a polished gem – one of the most gifted basketball players to roll through our area in several seasons.

In the classroom, she shines bright like a diamond with a glistening GPA and ambitions to major in kinesiology in college with hopes of someday being a trainer or a coach.

At home, she’s just an ordinary Jewel who loves to be a positive role model to her younger siblings – someone that they can look up to no matter what life throws their way.

Is there anything that Thibodaux High School standout Jewel Triggs can’t do?

That’s the question colleges and scouts are asking themselves as they bombard the young 12th grader with scholarship offers to secure her services for the next four seasons.

The attention is humbling to Triggs who said she’s honored to be wanted by so many top-flight programs.

But deep-down, Triggs said she’s happiest when she’s able to relax, hang out and be a normal teenager – something that doesn’t happen all that often lately, as the young hoops standout juggles a rigorous AAU playing schedule and a slew of unofficial college visits.

“She’s a normal kid,” her mother Charity Triggs said. “She likes to hang out with her brother and her sister. She likes to draw. She likes to swim. Really, anything that any other kid would do. She has a lot of friends, but she’s quiet. She keeps to herself a lot. She likes to be at home.”

“I just like to hang out with my friends and stuff,” Triggs said. “That, and I like to spend time with my family. I’m not too complicated. I like to play basketball and I like to be around my loved ones. That’s about it for me.”

From the earliest years of her young life, Charity Triggs said she had a pretty good feeling that her oldest child Jewel might be an athletic success.

The mother said that Jewel took up sports when she was “around 6”. The first sports in her repertoire were volleyball, softball and basketball.

She later added track and cross country to her resume later in her career.

“She really was pretty good at all three of those sports,” Charity Triggs remembered when thinking back on Jewel’s childhood. “In basketball, she always loved the sport. She might not have been great, but she always loved it. She always had the height and she was always coordinated, so we could tell that something was there.

“I’m her momma, so I’m probably a little bit partial to Jewel,” she continued with a laugh. “But other people told us she was good, so she’s always been talented.”

Triggs said she remembers those earliest days in sports, picking up a basketball with her father, Garland Triggs.

“The first time I ever picked up a ball was with my dad. He used to play with me outside when I was younger,” Jewel said. “From there, I liked it so they put me in recreation ball, and we just sort of went from there.”

Triggs’ early initiation into athletics paid off. She said she made the Biddy All-Star team every year of her career. From there, she made the decision to drop her other sports and focus just on hoops.

“I just continued to play, and I loved it,” Triggs said. “I just kept working, and I kept slowly getting better and better. I think I realized when I was 9 or 10 that this was something that I could be really good at if I kept working hard at it.”

Triggs’ prediction was right. The young lady continued to blossom and started her prep career at Vandebilt Catholic. While there, she established herself as a top-notch player as a freshman during the 2011-12 season.

After another solid year in 2012-13 for Vandebilt, Triggs transferred to Thibodaux and exploded as a junior, averaging close to 20 points per game. She compounded that dominant scoring with 6.4 rebounds, 4.8 assists and 3.7 steals per contest, while helping lead Thibodaux to a glistening 22-6 season.

Triggs is a self-described “two-three” player, meaning she’s a blend between a shooting guard and a small forward. Because of her slender, 5-foot, 11-inch frame, she has the quickness to wow slower players, but the height to post up as well.

“People say they like my versatility,” Triggs said. “That’s something that I think catches people’s attention, because I can play a lot of positions on the floor in a game.”

But the coach said the reason why Triggs can make things look easy on the floor is because of the hard work she puts in to perfect her game.

The Lady Tigers’ coach said Triggs is one of the most diligent players he has ever coached in his career.

“What you see on the court is nice, but she’s a hard worker, too,” Robinson said during last season’s run. “That’s the most important thing we talk about when we mention Jewel – it’s that work ethic. She’s always been willing to work hard and do the things we’ve asked.”

Because of the combination of talent, diligence and her sparkling 3.8 GPA, Triggs said she has a laundry list of colleges lining up to secure her services for the future.

Triggs said she’s received interest from well more than a dozen programs – the most recognizable on the list include LSU, Ole Miss, Lamar, Alabama, the University of Houston and Southeastern Louisiana University.

She recites the list slowly and quietly – almost shy about all of the fuss that’s being made about her elite-level talent.

It’s then that one realizes that Triggs is exactly what her momma explained – just a normal teenager who so-happens to have extraordinary talent.

“Yeah, I guess I do,” Triggs said with a laugh when asked if she has a massive list to pick from. “It’s a blessing, man. It’s really a blessing. I want to make my decision sometime at the beginning of the school year so I can focus all of my attention on my senior season. I still have a lot of things I’m working on in the gym because I want to make sure that this last year is my best one yet. That’s my biggest focus right now.”

SHE’S DOING IT FOR HER SIBLINGS

Triggs’ every move on the court is surveyed and studied by college coaches and scouts interested in her services.

But at home it’s no different.

That’s because Jewel is the big sister to one brother and one sister – children who definitely look up to their big sister.

Triggs’ little brother Jordan is 3. He’s described by Jewel as “a mess.”

“He’s so wild. He’s completely spoiled,” the proud big sister said with a smile. “You know how it is with that. He’s totally spoiled.”

Jewel’s sister Jade is 12 and is what one might call a “mini-me.” She, too, plays basketball and is active in sports – just like big sister.

“She takes after me. She tries to do all of the things that I do,” Triggs said.

So it’s for that reason that Jewel said she tries to go the extra mile at all times to behave properly – on and off the floor.

Jewel has a 3.8 GPA. She plans to major in kinesiology post-graduation in an effort to be a personal trainer when her playing career is done.

When off the floor, Triggs loves to draw. She’s sketched photos of her little brother before, among many other things in her notepad.

And when watching TV on her own, Triggs said she idolizes the game of LeBron James – someone she calls both her favorite player and the best player in the world.

Where she’ll go to college someday? We’ll just have to wait a few weeks for a final decision to be made.

But whatever school she picks will get a gem for the future.

Scratch that – they’ll be getting the Tri-parish area’s best Jewel.

“We’re so proud of her,” Charity Triggs said. “She’s an amazing kid. She works so hard and she definitely loves basketball for sure.”

“I just want to be a good role model for my brother and my sister,” Jewel adds. “I just want to work hard, do my best and set a positive example for them. If I can do that, I think I’m doing OK.”

Thibodaux High School senior standout Jewel Triggs has solidified herself as a top-flight talent, fully capable of playing at the college level. After a dominant junior season, Triggs will choose her school in the coming weeks so that she can focus on the 2014-15 season. The Lady Tigers are expected to be one of the top teams in our area this coming season after posting 20-plus wins one year ago.