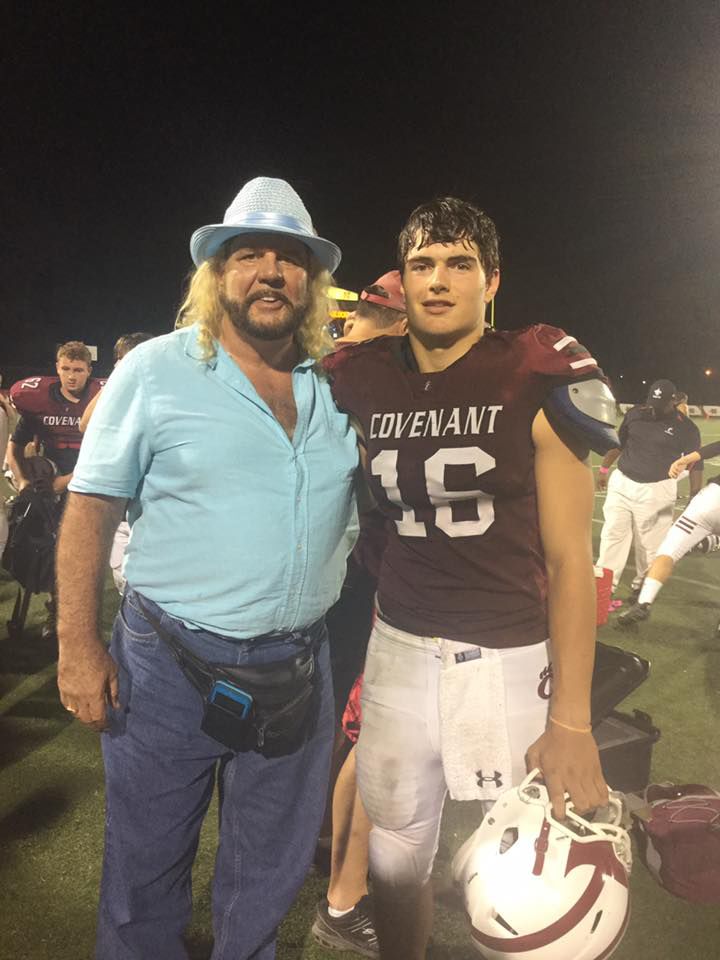 With elite athleticism and ball-hawking skills that simply can’t be coached, Seitz is one of the top defensive players in the area – a standout that is already generating collegiate attention, and is sure to get more as the season’s end draws near.

But when it’s all done on the gridiron, Seitz said he has a secret passion that he may ultimately pursue.

The Lions standout said he is contemplating a career as a professional wrestler – a move that, if he chases, would make him just like his uncle, who is one of the best who’s ever been in the business.

Seitz is the nephew of WWE Hall of Famer Michael P.S. Hayes – the famous retired wrestler who is known notably as being one half of the Fabulous Freebirds tag team.

Seitz said he’s close to his uncle. The two talk as often as time allows. He’s currently still employed by WWE as a backstage creative agent – a job that keeps him on the road for hundreds of days throughout the year.

But through his uncle, Seitz said he learned how to be a fighter, and how to keep pushing through adversity – something the senior has had to deal with all-too much this year after dealing with an injury-plagued year.

“It’s really cool to have an uncle that’s a famous wrestler,” Seitz said. “It’s something a lot of people don’t know about me. When we talk, he talks about wrestling a lot, but he likes to talk more about football and how I’m doing with academics and athletics and everything else. … He tells me to be safe and smart and to always do what makes me happy. I look up to him a lot.”

For Seitz, there’s a lot of “Freebird” in his game, and he possesses a lot of the athletic ability that made his uncle famous and popular around the world.

As a linebacker, Seitz is a ball-hawk – the type of player who always finds the football, regardless of where it is.

Seitz led the Lions in tackles several times in his career. CCA coach Randy Boquet said the non-stop effort the senior brings is inspiring to the entire Lions locker room.

“He’s a great leader for our football team,” Boquet said. “Caleb is a guy that has a lot of respect in our locker room. Our younger players look up to him, because he leads by example. He does a very nice job setting the bar for how we want things to be done.”

Because of that leadership ability, Boquet asked Seitz to step out of his comfort zone this season and serve as the team’s quarterback.

Seitz has always been a two-ways player, but he previously was a tight end.

Boquet said he expected the transformation to take a little time, but Seitz learned the position quicker than anyone expected.

One thing the coach said impressed him was Seitz’s ability to make plays in the passing game.

“He has a better arm than we imagined,” Boquet said. “We knew he could handle the ball. But we’re able to do a little more in the passing game than we thought, which gives us a little bit of a different dynamic.”

But it hasn’t been without adversity.

Early in the season, Seitz fell hard and broke his collarbone – an injury that kept him out roughly a month.

Now healed and 100 percent, Seitz is back on the field, and has a clear goal – he wants to lead the Lions to the Superdome and the Division IV State Championship – a goal that isn’t too far-fetched.

The Lions are 6-2 this season, and are considered to be among the top teams in Division IV.

“I feel great,” Seitz said of his injury and recovery. “My doctor did a great job with my surgery and I feel as strong as ever. Now, our 100 percent focus on back on the field and winning as many games as we can. We want to make a run for the Dome. That’s where we’re trying to head.”

Seitz is trying to head to the Dome, but it’s a building that his family already has history in.

His uncle used to sell out that building throughout the 1980s for Superdome Extravaganza – a wrestling show that featured some of the best matches in the history of the sport.

Seitz wasn’t yet born during those days, but he said he’s watched all of the old tapes and is well aware of how good his uncle was in the ring.

Whether or not Seitz will ever follow in his footsteps, he’s not yet sure.

But he, for sure, isn’t closing the door.

He said he’s very willing to chasing the career if all of the stars align.

“Being a wrestler would be great,” Seitz said. “I feel like I would have a good shot of making it good, but I’m just not sure yet if that’s what I want to do. I guess, time will tell.”

When asked if he’d want to be a “good guy” or a “bad guy” in the ring, Seitz smiled and again remained non-committal.