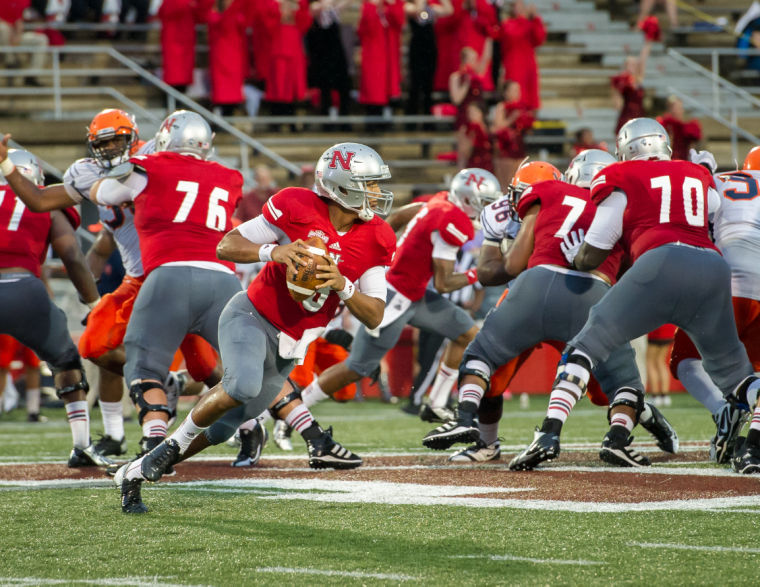 But you wouldn’t know it by watching the body language of players so far at preseason practices.

The Colonels have new life, and they’re not afraid to show it. They’re practicing and preparing like champions.

Like all college teams around the country, Nicholls is busy buried in preseason preparations in advance to a Sept. 12 opening game against UL-Monroe.

Despite low expectations around the conference, the Colonels’ spirits are high, and first-year coach Tim Rebowe said he’s pleased with how practices have flowed.

Players agree and tout that there’s a new energy and life around Nicholls football – one that is going to power the team throughout the fall and even into the future.

“There’s definitely been a change,” senior tight end Dorian Durald said. “There’s a different feel around campus and in our community and even throughout the team as a whole. We have a more positive outlook as far as the season and not just playing, but winning games. We’re more unified as a team. We’re closer and have more togetherness than we’ve ever had. That’s what our coaches preach, and that’s what we’re relying on to power us through this season.”

For the first time in quite a while, folks are excited about Nicholls football.

Since Rebowe accepted the job in November 2014, a lot of things have changed for the Colonels – especially in terms of mindset and attitude of the program’s players. A longtime assistant coach who is about to enter his first season as a collegiate head coach, Rebowe said one of the first things that he urged his players to do upon taking the job was to embrace Nicholls’ tradition. The coach said he wants his guys to take pride in being Colonels.

Throughout the offseason, Nicholls players have visited local hospitals and have done several other things to build that camaraderie, while also sparking an interest in the community – something that the team has lacked in the past several seasons.

“Since we got here, we’ve been getting out in the public hard,” Rebowe said. “I tell our guys all of the time that we’ve got to give back to the community, which has been so good to Nicholls. I think our guys have been receptive to that. We’ve been to hospitals. We’ve visited schools. We’ve done a lot of things to give back, and I think people are starting to take notice of that. I think there’s a lot of positive talk about Nicholls State University football. I think we’ve got some buzz and some momentum. That’s something that we’ve maybe not had here in some of the years past.”

Now the chore is to carry that momentum onto the field on Saturday afternoons during the college football season.

Rebowe said he’s pleased with where the Colonels sit after more than a week of practices, touting that the team is getting better and better every day.

The coach said that he loves the fire and competitive edge that he’s seeing in his team – even in sometimes oppressive summertime heat.

“I think it’s going pretty well for us,” Rebowe said. “I’ve got to tell you – I like the energy, and I think that the guys are really working hard and are coming together. It’s amazing to think that we only had 15 days in the spring, combined with a really good offseason. But we’re really starting to put it together now, and we’re really excited to be back together and working hard on the practice field.”

Perhaps one of the reasons for that hard work and determination is because of all of the starting positions that are up for grabs in camp.

Rebowe said that the Colonels have several spots up for grabs at positions splattered throughout both the offensive and defensive depth charts.

The coach said that’s good, touting that competition brings out the best in everyone at this time of the year. Durald said he agrees, adding that he sees a fire in a lot of guys to try and make a good first impression with Rebowe and his staff – one that could mean playing time in the fall.

“It’s competitive,” Durald said. “Guys are competing and flying around the field. It’s a different vibe, and I think it’s also a good look for us. We’re hungry, and we’re eager to make our mark this season.”

The Colonels open the 2015 season on Sept. 12 against UL-Monroe. They will be on a bye week the weekend that everyone else will be making their season debuts.

Rebowe may not have won a game yet as Nicholls head coach, but he’s won the hearts and minds of several of the top prep players in Louisiana who are graduating in 2016.

Believe it or not, but the Colonels are scoring big-time victories on the recruiting trail, and have secured verbal commitments from five guys already in the 2016 class.

The other three players are from the New Orleans area, including Rivals.com two-star commitment wide receiver Christian Booker.

Per NCAA rules, Rebowe can’t comment on any high school player by name until they’ve signed a scholarship with the team. But he was able to confirm that recruiting is red-hot with the school, and things are on the up-and-up.

“We’ve build great relationships with some of the coaches around the state of Louisiana,” he said. “And a lot of those guys trust in what we’re doing and know that we’re doing things the right way and are going to be a place where young men can come in and play.”

For Jackson and Poindexter, the decision to stay close to home was pretty simple – each said they felt at home with Nicholls.

A 6-foot, 4-inch, 245-pound defensive end, Jackson said he thinks the Colonels aren’t yet done, and will scoop up a lot of the top talent in our area before it’s all said and done.

“We’re building a family here,” he said. “We’re bringing it back. We want to be part of the group that puts it back on the map.”