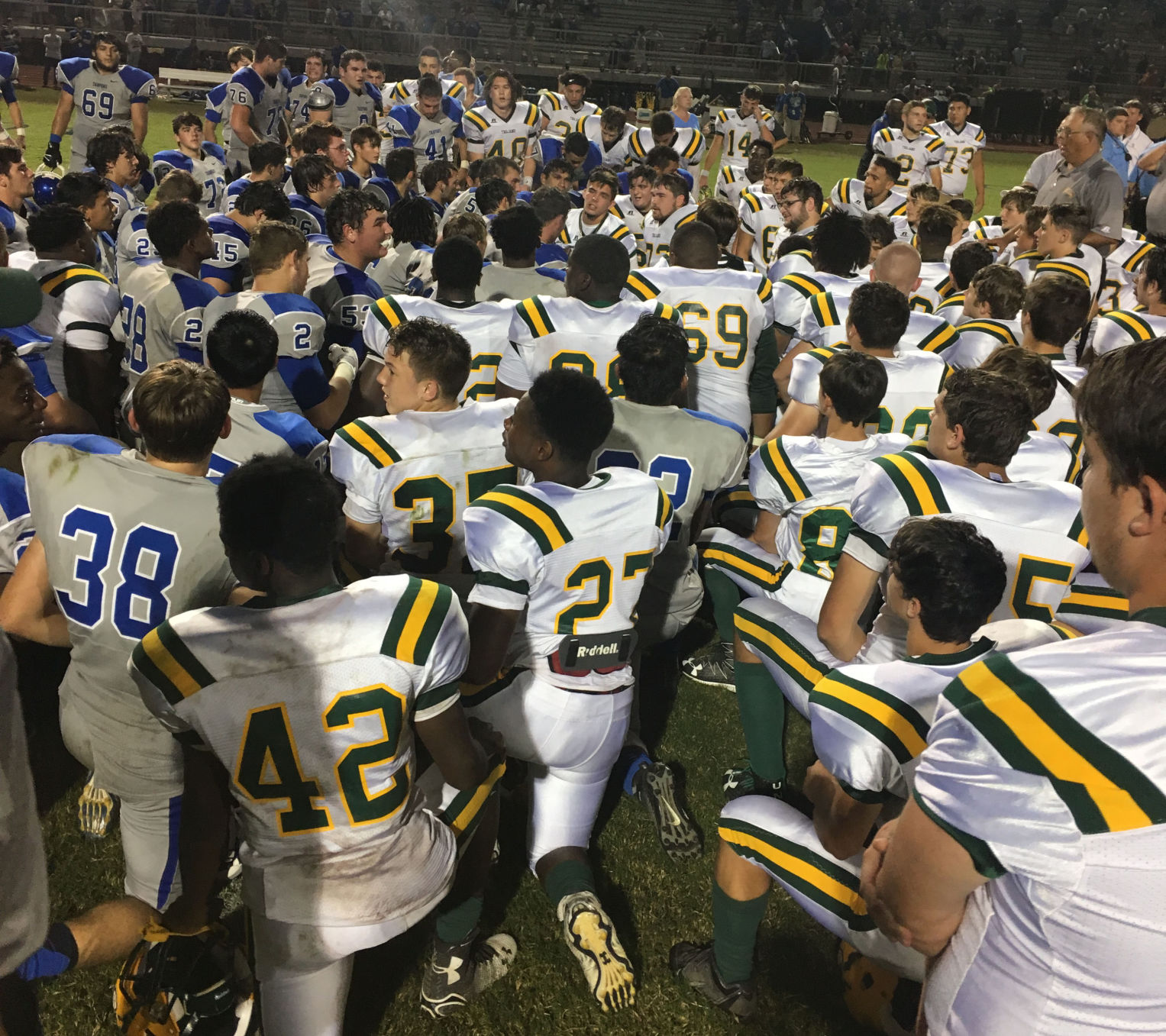 For 48 minutes on Friday night, South Lafourche and Central Lafourche were every bit of the arch enemies that they’ve been for 50 years.

They beat on one another relentlessly in a back and forth battle – an extremely physical tilt that will go down as one of the best games of the 2016 prep football season.

Some of the licks were clean. Some were after the whistle and when the play was over – a fixture in the heated rivalry.

But when it was over, the two programs had a rare moment of unity and made a statement about what each team stands for and what the programs believe high school athletics ought to be about.

After shaking hands following Central Lafourche’s 41-34 victory over the Tarpons, the teams started to go their separate ways, but were then pulled back together by an emotional Menard, who said his heart told him to speak to South Lafourche.

The teams gathered together at midfield and heard a post-game pep talk from the coach, who said it was one of the most hard-fought games of his nearly 30-year career.

After the short address, the kids said a prayer, then received a standing ovation from the jam-packed crowd that got its monies worth throughout the thrilling game.

“I am extremely happy and extremely proud of our kids,” Menard said. “But South Lafourche played so hard. The effort they gave was one of the better efforts I’ve ever seen a team give. To me, it’s what high school sports are about. To me, to have the chance to go and battle somebody, then once the clock runs out, it’s over. We have a rivalry with those guys and everything, but we ended it right. We thank the man upstairs for giving us the chance to play an incredible, incredible football game.”

The game was pretty epic.

Central Lafourche led for most of it, using a Herculean performance from quarterback Jake Allemand to beat the Tarpons for the first time in nearly a decade.

Allemand was 12-of-20 passing with 269 yards. He also rushed for 60 yards – almost all on big third down plays to extend drives.

“He was special tonight,” Menard said.

But no matter how good the Trojans seemed to me, they couldn’t run past their rivals.

Central Lafourche led 14-0 in the first quarter, then 21-6 with a minute to go in the first half – a drive capped by a touchdown run from halfback Nelton Allen.

But then the Tarpons bounced back – going 90 yards in less than a minute to score before half and cut the game to 21-13.

Out of the lockers, Central Lafourche hit ‘em again, scoring two-straight touchdowns to go up 34-13 with 1:57 to go in the third quarter.

But just like at the end of the first half, the Tarpons clawed into the fray, using a pair of deep bombs for touchdowns from quarterback Jaydon Cheramie to Demarcus Caine to get closer.

“Our effort was about as good as I could ask,” South Lafourche coach Brandon Nowlin said. “We played hard and the kids left it out on the field. We just got behind a little bit and were always playing against the scoreboard.”

The teams traded touchdowns in the fourth quarter, which made the game 41-34 with a few minutes left and with the Trojans in possession of the ball.

The final seconds were dramatic. The Trojans couldn’t successfully run out the clock, which forced them to punt to the Tarpons with just more than 30 seconds on the clock.

South Lafourche got the ball and hit a few successful plays to make it interesting.

But a last-second screen pass went for naught and ended the game and started the post-game celebration.

Fans from both sides cheered in appreciation of the battle that ensued.

Menard said he’s prayed with opponents after games, but has never given a post-game pep talk to his opponent.

But on this night, he said he had to.

The circumstances and the situation made it inevitable.

“I shook Brandon’s hand, and he was very emotional,” Menard said. “I would have been, too, if I were in his shoes. I told him, ‘Brandon, please let me have a word with your guys.’ He agreed, and I just spoke from the heart. I just wanted those guys to know that it was a heck of a contest and that even though we’re these big rivals or whatever, once the game ends, we’re all friends again.”

“It was a hard loss,” Nowlin added. “Our kids wanted it badly. But it was an awesome football game. We lost on the scoreboard and we fell short, but we’re getting a lot of wins in some areas that are more than scoreboards on Friday nights. … I think that moment was one of those instances right there.” •