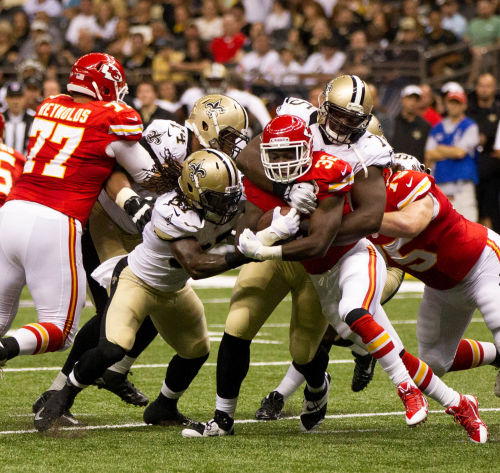 It was another week and another passing grade for the New Orleans Saints.

Led by quarterback Drew Brees’ four touchdowns (three passing, one rushing), the Saints rolled to their most lopsided victory of the season in their 31-7 victory over the Arizona Cardinals at the Mercedes Benz Superdome last Sunday.

The Saints amassed a season-high 446 total yards, with Brees throwing for 342 yards and completing 29 of 46 passes. New Orleans finished with 27 first downs.

The running game, somewhat predictably, was another story.

While the Saints did rush for a season-high 104 yards on 24 carries, 21 of those were courtesy of Brees, including his seven-yard touchdown run early in the fourth quarter.

Through three games, the Saints have averaged just 89 yards per contest on the ground. Pierre Thomas has been the team’s rushing leader with 25 carries for 100 yards and the all-purpose Darren Sproles has added 65 yards on 18 carries.

Mark Ingram sat out Sunday’s game with a toe injury after an uninspiring effort – the latest in what has become an increasingly long line of them – in the Saints’ Week 2 victory over Tampa Bay.

Khiry Robinson, a 23-year-old rookie and non-drafted free agent out of West Texas A&M, made his NFL debut Sunday and rushed four times for 38 yards, highlighted by a 21-yard run.

In spite of the Saints’ often publicized struggles to establish a dominant running game, the team is 3-0 and head coach Sean Payton doesn’t seem concerned.

Payton noted that the team still rushed for over 100 yards after being forced to adjust on the fly to some of the looks the offense received from Arizona’s defense early on.

“It’s hard for me to diagram the defense, but we made some changes early in the first half when we kept seeing that we were getting a five-man rush and heavy fronts,” he said. “It was just about us being smart. Some of the shorter passes were the equivalent of plays that would have been runs. (Brees) has great command of what we wanted to do. We feel like we have a lot of options for him and fortunately we were able to get to the options.”

To this point, the Saints have been able to offset or at least overcome any deficiencies in the running game in a variety of ways.

One of them is that the team has been dominant in ball control. New Orleans has averaged over 14.5 more plays per game against its opponents this season, thanks in no small part to being able to win battles on third down.

They held Arizona to 5-of-13 on third down. For the season, the Saints have held onto the ball more than 26 minutes longer than the opposition.

Numbers like those have served as key factors in the team’s success.

“I thought on third down particularly, we got them off the field,” Payton said after Sunday’s game. “After that first drive, we were outstanding. The other thing I liked was I thought in the second half we created some field position in the kicking game.”

On the defensive side of the ball, the Saints have looked noticeably better under first-year coordinator Rob Ryan than at any point last season.

The Saints have been getting after opposing quarterbacks all year, with the defense registering a season-high four sacks against Carson Palmer in Sunday’s victory and forcing two turnovers off interceptions.

They held Arizona to fewer than 300 total yards Sunday and allowed 15 first downs.

“We were able to get pressure and get back there,” said Saints defensive end Cameron Jordan, who accounted for two sacks. “We had a depth to our defensive line, which is always amazing. We have a lot of youth and talent on the line.”

With the defense coming together and the Saints beginning to dominate in several others areas, Brees said the team is forming an identity and getting help from a number of players new and old.

“While there are a lot of familiar faces that have been in the program for some time, we have some new players who are playing some pretty significant roles on this team,” Brees said. “It’s not until you start playing games and battling together and fighting through adversity, and counting on each other and all those things that you find out about your team.”

And even if the team doesn’t have an overly imposing running game – several teams, including those who’ve won the Super Bowl in recent years, haven’t either – they’re still finding ways to win.

“It’s early, but we’re pleased with the start,” said Payton.

New Orleans Saints defenders bottle up a Kansas City Chiefs tailback during a game this preseason. The Saints defeated the Arizona Cardinals this weekend in the Superdome. With the win, the Black and Gold marched to 3-0 on the season. The Saints will take on the Miami Dolphins Monday night in a showdown of unbeaten teams.