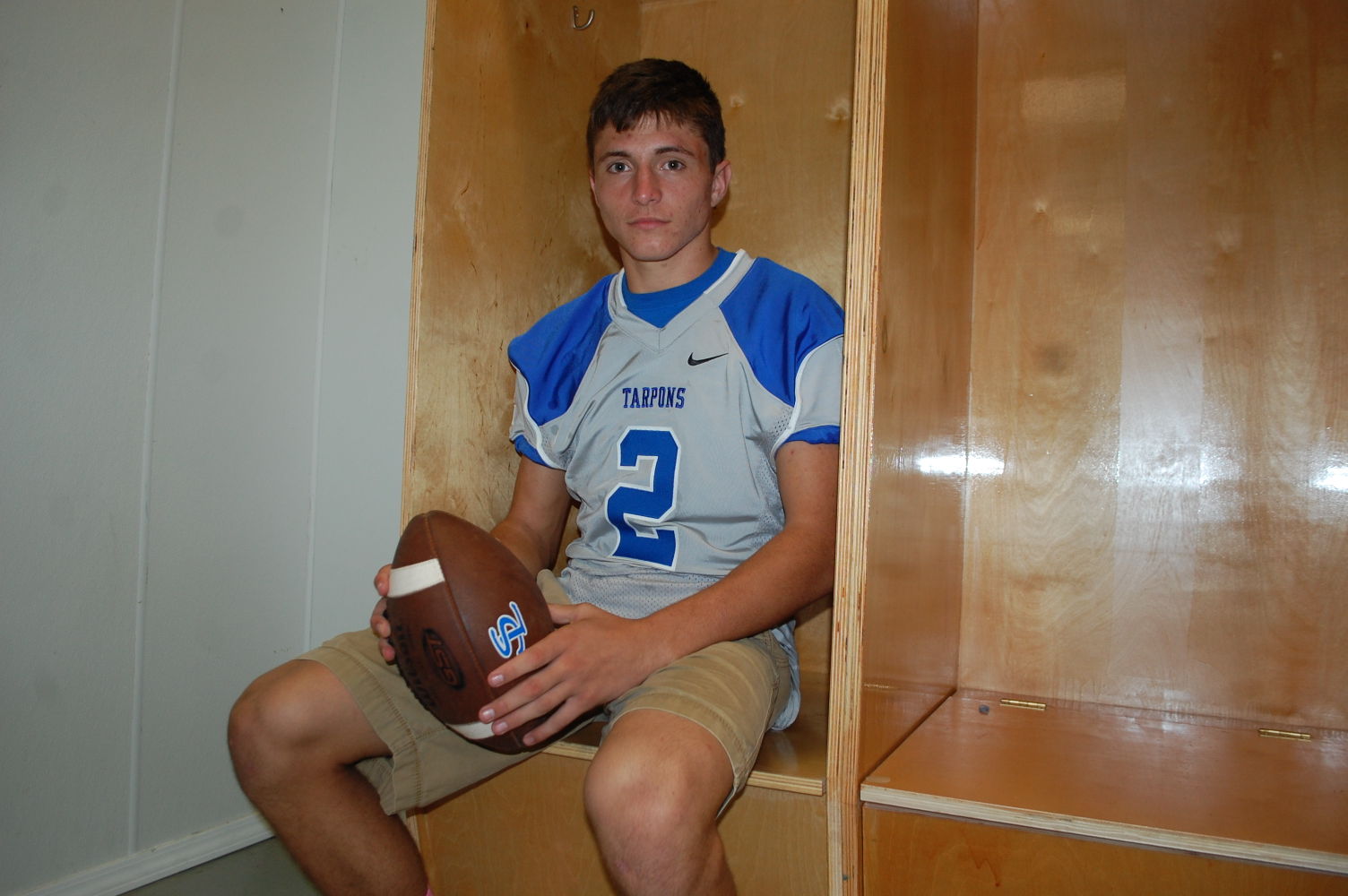 It would be real easy for South Lafourche senior Dominick Fillinich to complain about the situation.

Who wouldn’t complain in his shoes? Fillinich’s next 90-plus days will be hell – starting with surgery today and ending with rehab and everything else that comes with a significant injury like his – a torn labrum and dislocated shoulder that he suffered a few weeks ago against Terrebonne.

“It sucks,” Fillinich said on Friday night. “I’m not looking forward to surgery. I’m just ready to get it out of the way and get back healthy for track.”

But instead of being negative and lingering over what’s wrong in his world, Fillinich said he’s moving forward and trying to help his team – any and every way that he can.

The South Lafourche football team is without Fillinich on the field for the rest of the season – the byproduct of his injury, which will sideline him for four months from all athletic competition.

But Fillinich’s presence is not lost on the Tarpons’ locker room or practice fields, as the senior has made it a point to be as involved in every way possible since his injury.

To the player, it’s nothing – he says that he’s just “standing beside my brothers.”

But to Tarpons’ coach Dennis Skains, Fillinich is proving that he’s a true, consummate senior leader – among the most selfless players that he’s ever coached.

“I don’t know how he’s doing what he’s doing right now, because I know he’s just itching to be on that field,” Skains said. “But it’s like we’ve added a new coach. He works with the defensive backs and makes sure that they’re lined up right when we make a call. I saw him the other day working with our young receivers, as well. He’s great. He’s a true, consummate senior leader – everything that you want and can ask for out of an experienced guy. And it’s been that way all season – even before the injury.

“We miss him like hell on the field. But we’re grateful that he’s made the decision to still be so heavily involved in our team because a lot of guys wouldn’t be here every day being a part of this ride like he has. That shows character and class on his part.”

For Fillinich, the sacrifices actually started this past spring.

As a junior, the now-injured standout was called on to be South Lafourche’s starting quarterback – a position left open when outgoing senior quarterback Colby Callais graduated from the program after going undefeated in the regular season in 2012. Despite a lack of varsity experience and big expectations from the team’s 2012 success, Fillinich handled the job well. He led the team to a 5-5 record and another berth in the Class 5A State Playoffs, where they eventually fell to Barbe.

But with the emergence of junior quarterback Harvey Allen and with some holes at the skill positions on both offense and defense for 2014, Skains said he and his staff made the decision in the spring to move Fillinich to receiver and defensive back. It was a move that would allow the Tarpons to get more snaps per game out of Fillinich – an incredibly natural athlete who is also a force for the South Lafourche track team, as well.

Moving a returning, successful starting quarterback to a new position is a decision that is always sensitive to any prep football team because of the feelings of pride involved with the players playing those key positions within a team.

But Skains said Fillinich handled the decision with class and maturity. He said the senior immediately accepted the challenge of being a two-way player, never losing any of his effort or intensity along the way.

“I enjoyed being a quarterback,” Fillinich said. “But I was going to play wherever they told me to play. I love going out there with my team. I was going to line up at any spot to help our team win.”

“He’d be having a great season for us at quarterback right now if we’d have left him there,” Skains added. “We just wanted to maximize his talents and have him out there for as many plays as we could in a game, because he’s such a special unique kind of football player. He can impact a game so many different ways because he’s always around the football making things happen. We needed that on the field to give us a great chance.”

Unfortunately, life as a skill position player never was in the cards for Fillinich for 2014. He said that in the team’s first practice in full pads, he lunged to tackle a teammate and landed hard on his shoulder – the full weight of his body jamming on top of his upper body.

“I didn’t think anything of it,” Fillinich said. “Our trainer did some work on me. She got it back right, and I came back that same practice.”

But Fillinich’s body was playing tricks on him, because he said the shoulder popped out again later – this time more serious.

“They had to put me to sleep and get it back in place and everything like that,” he said. “That time, they told me it would be about six weeks without being able to play or anything.”

Fillinich said the six-week waiting period was the slowest stretch of days in his life. He said he’d go to the doctor for periodic check-ups with hopes of being cleared to play sooner, rather than later.

The Tarpons lost their season-opener to Landry-Walker via a blowout, and Fillinich said not being able to help his team on the field left a sick feeling in his stomach.

“To not be able to be out there helping them out – it was just a bad, terrible feeling,” he said. “It was hard. It was very, very hard.”

After missing the team’s first two games of 2014, Fillinich was finally medically cleared to play in the team’s game on Sept. 19 against Shaw.

It was hard to gauge the senior’s impact in that game, because the Tarpons played poorly as a team on that night, falling 56-15 to the Eagles.

But Fillinich’s impacts were felt heavily in the team’s next game against East St. John.

“You hear his name called a lot because he’s always around the football,” Skains said after the Wildcats’ game. “He’s experienced, and he’s a leader. He’s a major difference maker for us.”

Fillinich carried that momentum into the first minutes of the team’s next game with Terrebonne – making a few key tackles to start the game.

Playing defensive back while defending a Terrebonne pass play, Fillinich lost his footing and fell to the newly sodded grass in Tom B. Smith Stadium.

His prep football career had ended abruptly after a senior season of two games and one quarter of action.

“I knew that it was bad,” Fillinich said. “I knew it was back out of place. I had to go back to the hospital again that night.”

Even with the injury against Terrebonne, there was a small sliver of hope that Fillinich could return to play this season – a hope that was dashed on Monday of this past week when he was told that he’d have to have season-ending surgery.

“He’s handled it well – better than I would be. Better than most adults would be, and he’s only a kid,” Skains said. “I think that speaks pretty loudly to who he is.”

But for Fillinich, the real pain doesn’t come from his shoulder, the surgery’s scar, the rehab process or anything else on his body. It comes from what happens inside the white lines.

Fillinich said it hurts him knowing that he’ll never share the field with his teammates again – calling it one of the most difficult things he’s ever had to deal with.

“It sucks man. I’d be lying if I said it didn’t,” Fillinich said. “I’d do just about anything to be out there.”

But it’s a struggle that he keeps to himself because of his passion for his teammates’ success.

During games, he is the team’s biggest cheerleader – shouting encouragement throughout the game, no matter the score.

Sure, it’s hard not to be on the field as a senior – there’s no doubt.

But the true test of character is how one acts when no one is looking.

And it’s those unseen sacrifices that Skains said are why Fillinich is a huge part of the team’s 2014 season – even if not playing for the team because of the injury.

“I’d take a Filly on my team every year,” Skains said. “I’d take 10 of him if I could. He’s someone our guys look up to, and he’s done everything we’ve ever asked without a complaint. He’s the true senior leader.”

South Lafourche senior receiver/defensive back Dominick Fillinich poses in his locker with a football. The Tarpons’ senior leader will never again wear that No. 2 in game action after tearing his labrum during the season.