Keeping up with the local pro: Sumar diaries from Puerto Rico 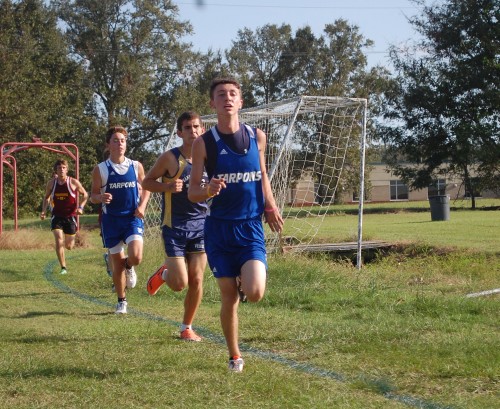 That’s fine by them – district is the only thing on the minds of the distance runners that reside down the bayou.

After winning the Bayou District crown last year, the Tarpon boys are looking to find the winning formula that will allow them to mesh late in the season and repeat as champions.

“We’re still trying to find the right combination with the boys,” Guidroz said. “We have had four really good showings today, but the fifth runner, we’ll need to work on before district. … If we can find that last piece to the puzzle to round out the lineup, I think we’ll be in great shape.”

While Guidroz searches for depth, he has the luxury of top-level talent within his team.

Sophomore Brandon Brunet anchors the Tarpons’ group – one of the elite runners in the area.

An All-District performer in both cross country and track and field in 2011-12, Brunet will likely serve as the team’s top performer when district rolls around.

Brunet has steadily been finishing in the top 10 at early-season meets, despite battling fatigue in the middle of races.

In this past week’s race at Vandebilt, Brunet started at the top of the pack, but eventually sagged and finished seventh.

Guidroz said when the early-season kinks are worked out, Brunet should be a legitimate threat to win the individual district championship.

“I don’t know if it’s a little asthma problem or a little bit of an injury, but Brandon was hurting today and he was hurting yesterday also,” Guidroz said following the Vandebilt race. “He’ll come around. He’ll get into better shape and he’ll be fine.”

If Brunet doesn’t take home the title, one of his teammates may be next in line.

Co-anchoring the top of South Lafourche’s team is senior Jake Lee, who has been impressive in the early schedule.

Lee finished fourth in the Vandebilt meet and has emerged as a threat.

Guidroz said Lee and Brunet are a one-two punch that feed off one another in practice.

Lee’s leadership and experience has proven invaluable for the Tarpons.

After Brunet and Lee, South Lafourche relies on freshmen Brennan Bernard and sophomore Chris Whitney in the middle of its rotation.

With a younger bunch, Guidroz said having a senior is a must for the team.

“Once you get the wheel rolling, it’s second nature that the young guys look up to and feed off of the older guys,” Guidroz said. “It’s easy to coach when it’s like that. Right now, our senior is really the one doing a lot of coaching to our young guys. That’s a good thing to see and it’s a good system to have.”

But while the Tarpons may have a top-heavy lineup, the bottom of their team remains unsettled.

Guidroz said South Lafourche doesn’t know who its fifth runner will be when the district meet rolls around.

The coach is currently working with multiple runners, trying to find the best fit.

“That spot is undecided right now,” Guidroz said. “We have a little bit of a void there because we lost some kids to graduation last year. We’ll have to work with the kids and make a decision about that pretty soon.”

While the bottom of the team’s rotation may be unsettled, no one is pressing the panic button in Galliano.

That’s because the Tarpons are somewhat known for early-season struggles and late-season success.

Last year, the team struggled in early-season meets and yielded victories to Terrebonne.

“We held back guys who were a little nicked or who didn’t have the conditioning,” Guidroz said.

But in the district meet, South Lafourche ran full-strength and secured the points necessary for the district title.

Guidroz said he hopes a similar scenario plays out this year.

If he molds a few runners into shape, he believes it’s a real possibility.

“Different kids work and respond differently to different forms of training,” Guidroz said. “Some kids, speed work is what works really well. Other kids, it’s more distance that works well. It takes a while sometimes to see what clicks with the kids. Hopefully, this year, we can do the same thing as we did last year.

“Come district time, it is our goal to have that right winning combination.”

South Lafourche cross country runner Jake Lee pushes forward while teammate Brandon Brunet trails behind. Lee and Brunet are the anchors of South Lafourche’s boys’ team – a group trying to repeat as district champions. If the Tarpons can find a fifth runner, they believe they have as good a chance as anyone to earn the distinction as the area’s top Class 5A team.