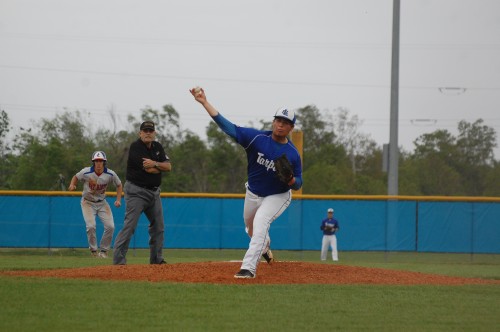 Let’s face it – it’s just more than a month into prep baseball season and practically no one likes the new, less powerful bats.

Their hitting statistics indicate that they are slugging just fine.

With offenses down across the area because of the LHSAA’s newly instated watered down aluminum bats, the Tarpons are serving as the exception to the rule this season, using powerful offense to spark their success.

South Lafourche has rolled to an 11-3 start and believes with continued good play, they should be a force in the just beginning district play.

The Tarpons average nine runs per game so far this season and have scored 10 or more runs in six of their 14 games.

Leading that offensive charge has been the power surge of sluggers like Regan Dufrene, Colby Callais, Norry Galjour and Hunter Alario.

Dufrene is currently batting .477 on the season with three doubles, three triples and 17 RBI.

Callais isn’t far behind with a .457 average with six doubles and four triples.

Alario has pitched in five extra base hits and Galjour has proven the team’s most steady power hitter with three home runs on the season.

“We do,” Landrum said when asked if his team has firepower. “When we can get into pitches and get into a groove and get some momentum going to where we could free swing a little bit, look out, because yes, we do have some power.”

But where the home runs and doubles into the gap get all of the love, the team’s players say it’s the little things that truly make South Lafourche’s offense great.

Alario lauded the work of pesky table setting hitters like Corey Helmer, Alex Martin and Cy Griffin, saying that without them on base, the sluggers’ extra base hits would likely be for naught.

The process of scoring runs sometimes was a troubling one last year for South Lafourche.

The Tarpons consistently had runners on base, but a combination of lingering base running errors and poor situational hitting doomed the team and forced them short of their goal – to be a district champion.

With that in mind, Landrum, who was in his first year with the team last season, changed his practice philosophy a little in his second go-round.

Dufrene said in batting practice, the Tarpons hit with runners on second and third base. That emphasis on timely hitting has resonated with the team.

Instead of stranding runners on the base paths, South Lafourche is now recording more big hits, which is thus enabling the team to win some of the close games that they lost a year ago.

“Doing that has really helped us a lot to focus,” Dufrene said. “So far this year, when we get someone in scoring position, we get them in. Whether it be the 8-hole hitter, the 9-hole hitter or the cleanup hitter, when we get someone in position, we get them in. We hit the home runs and everything, but we don’t focus on that. We just focus on put the ball in play.

“If we put the ball in play consistently, we’ll score plenty.”

With South Lafourche’s offense hanging crooked numbers regularly, it is up to the team’s pitching to seal the deal and clinch victory.

So far, the team’s young, but talented pitching staff has done just that.

Because of that youth and inexperience, the team sometimes struggles to consistently record outs.

But for the most part, the Tarpon pitchers have done more than hold their own, allowing just 3.5 runs per game – easily one of the top marks in the area.

“They are doing really good,” Dufrene said. “They’ve stepped up and have done a really good job.”

“They haven’t let their youth be a factor,” Alario added. “They’ve just gone out and gotten outs. And that’s a great thing. That’s helped us.”

Landrum agreed and said it all comes full circle for the Tarpons.

He said the team is at its best on the mound when South Lafourche has momentum and is slugging at the plate.

“When we’re hitting and they are able to relax, maybe have a little lead, that’s when they have been at their best,” Landrum said. “We’re good when we have momentum.”

With momentum currently at their side, the Tarpons are eyeballing a potential district title.

South Lafourche had the best pre-district record of anyone in District 7-5A.

The team certainly expects that to continue going forward.

“We won’t take anyone for granted and we respect all of our district opponents,” Alario said. “But we feel like we can beat anyone in the district and win this thing. That’s our goal.”