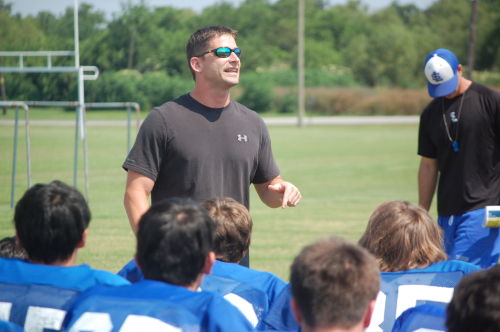 Time will tell if there will be any candy or costumes, but a high-stakes rivalry game will take place on Halloween in Lafourche Parish this fall.

South Lafourche’s week nine home tilt with archrival Thibodaux on Oct. 31 is among the games that will be showcased as Louisiana’s Game of the Week.

The game will mark the first time either school has been chosen to be a part of a Cox Sports Television telecast.

They will join E.D. White and Patterson as the only programs in the Tri-parish area to be given the honor.

Both Tarpons coach Dennis Skains and Tigers coach Chris Dugas believe it will be a golden opportunity to showcase Bayou District football to a regionally televised audience.

“We don’t necessarily like that this is on Halloween night, because it probably will hurt our crowd, but if you take the good with the bad, this is a great chance to showcase our whole district to the state,” Skains said. “Obviously both schools get recognized and it’ll be a great chance for the kids on both teams to be showcased and recognized.”

“The kids are excited to get to play on TV on a Thursday night,” Dugas said. “To have the state’s game of the week on Halloween – that’s a big deal. I can’t speak for them, but I know our kids are really pumped up about it.”

To make the game a reality, a couple of things had to be sorted out between the two local programs.

When the LHSAA released their original schedules earlier this year, the Tarpons and Tigers were scheduled to play on Nov. 1 – a Friday night.

But the time slot the network had open called for a Thursday night game.

While discussing the game with the network, Skains said he called Dugas to make sure that both schools were in favor of moving the game up a night.

Each coach had the same idea in mind: the risks outweigh the rewards for both programs.

“Dennis gave me a call and he said, ‘Look, do you mind if we move up the game by one night because Cox Sports wants to televise us as the game of the week,’” Dugas said. “It was a no brainer. I told him no problem. I knew our kids would be excited about that.”

“The short week will present challenges, but I think we’ll work through it,” Skains said. “Our kids will be excited, and we’re honored to be chosen to host a game like this.”

So with the TV game now set, the Tarpons and Tigers’ focus will be to make sure that the Halloween action has playoff implications.

The Tarpons advanced to the Class 5A State Playoffs as the No. 8 seed.

Their hopes at a state championship run ended in the opening round of the playoffs when they were upset by No. 25 Ruston 28-13.

But South Lafourche has a lot of returning pieces from that team – a senior class that includes Vanderbilt commitment and left tackle Bailey Granier, defensive lineman Mason Boudreaux and linebacker Peyton Guidry.

Skains said this past spring that he believes the team has enough in the cupboard to continue to roam the top of the district standings.

Thibodaux is entering the new season in the role of the hunter and not the hunted.

The Tigers finished last season with just a 3-6 record and a 2-4 mark in district play.

But like the Tarpons, Thibodaux also returns a slew of its top players from last year’s squad – most notably halfback and First-Team All-State halfback Donta Johnson.

For the Tigers to take the next step and challenge for a postseason bid, they will likely have to give a better effort against their rivals to the south.

Overall, they hold a four-game winning streak in the hotly contested series.

Dugas said he knows this year’s game will be no different, and the two teams will compete until the final whistle.

He just hopes the stakes are high and both teams are able to show the Southeast the quality of football played in our area.

“Every time we get together, it’s a hard-fought game,” Dugas said. “This is a rivalry. It’s been a rivalry for years. Hopefully now we both do our parts to make this a big game that means something for us both in terms of the playoffs.”

South Lafourche coach Dennis Skains talks to his team this past spring. The Tarpons will play Thibodaux on TV this fall on Oct. 31.