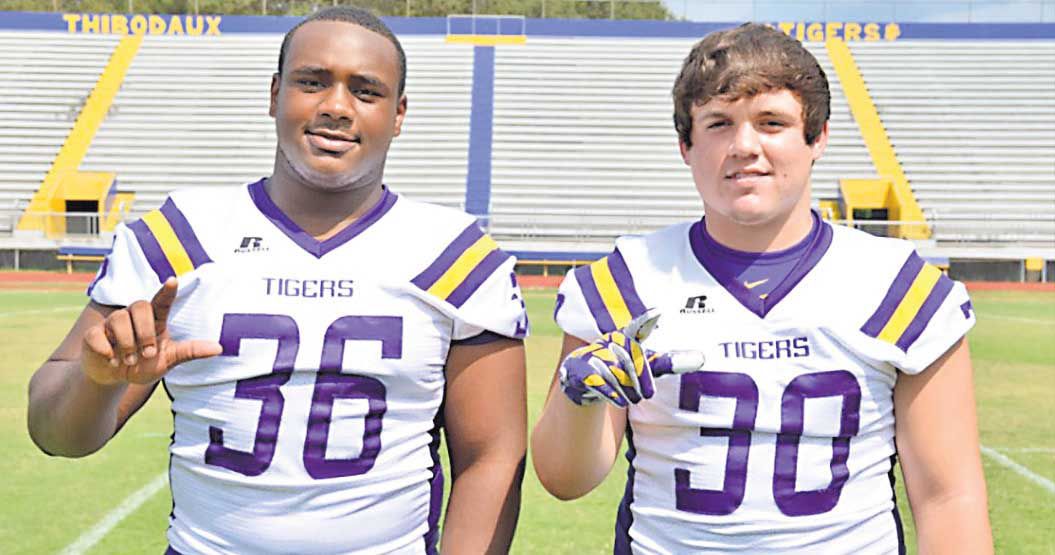 For the third time in three seasons, the Thibodaux High School football team has a new defensive coordinator.

But folks around Tiger Town aren’t too worried about the change, because this year’s Thibodaux team is loaded to the brim with college-bound athletes on both sides of the ball.

Questions surround Thibodaux’s defense in 2016, as Wildred Broussard takes over the unit – a group which will face several high-powered offenses in the brutally tough District 7-5A.

But the Tigers will battle back with some skill of their own, possessing several returning players from a team which was among the best in the area last season. Players and coaches hope that combination of size and speed will be enough to tame the tough schedule and make a push at the Class 5A State Championship.

“Our district is always tough – there’s no doubt about it,” receiver Romon Joseph said. “But with all of the hard work we put in over the summer, I believe we have what it takes to win it. We are being doubted this year, but we take it as motivation to make us even better.”

Defensively, concerns surround Thibodaux in 2016, but it has little to do with the team’s talent and more about whether the players will respond to coaching and understand the system.

This will be the third-straight season the Tigers have a new coordinator on that side of the ball after losing Carey Melvin in 2014 and Ashton Cagnolatti after last season – both to head coaching positons.

This year, Broussard takes over – a veteran coach who started his coaching career at Thibodaux in the early 2000s, then made a 12-year run at the prep level in Arizona before returning home in recent seasons and coaching briefly at H.L. Bourgeois and Berwick before returning to Thibodaux.

Thibodaux football coach Chris Dugas said the unit Broussard has to work with is impressive. The Tigers have several returnees on the defensive line and in the secondary – a luxury that should protect an inexperienced linebacker corps.

Among the key Thibodaux defenders in the secondary are Robertson, who is one of the best defensive backs in Louisiana, Tyler Brown and Seth Boudreaux. Dwayne Coleman is a hybrid safety who will also play some linebacker.

On the defensive line, Dugas said the Tigers are as big as they’ve ever been with, 300-pounder Darius Richard leading a group that also features Tyreek Gage and Brennan Garman.

Robertson said concerns about the first-year coordinator are real, but that Thibodaux’s players have bought in and are accepting Broussard’s coaching.

“It’s stressful at times,” Robertson said. “I’d be lying if I told you it wasn’t. But we’re adjusting. Most of the concepts are the same thing. As long as we have communication and commitment to one another, we’re going to be OK. And so far, we’re doing that.”

Offensively, Thibodaux is athletic and fast with Robertson leading the way as one of the most explosive players in the area.

Dugas said the standout playmaker will play multiple positions, and will be a huge part of the team’s game plan every week.

“We are going to get him 20-25 touches per game,” Dugas said. “He’s going to play some slot receiver, some halfback and even some wildcat quarterback. He’s a kick returner and a punt returner, too. He just has that ability to make something special happen every, single time he touches the football, so we’re going to do our best to make sure that we get him touches in way that he can be explosive for our offense.”

Robertson said he likes hearing that he will get the ball in heavy doses every week, but added that he’s a team-first guy who doesn’t want any individual glory for the Tigers’ season.

“I have a responsibility to do a lot of things, yes, but to me, my responsibility is more to my teammates,” Robertson said. “I am a hybrid athlete. I will do anything. Any sacrifice I have to make for my offense, that’s what I’m going to do.”

When Robertson isn’t touching the football, the Tigers have several other gifted weapons, including Joseph and quarterback Saul Barrilleaux, who is a first-year starter, but who is showing promise.

Protecting the playmakers are talented linemen like Malik Harry, who is getting college attention and also William Reed and Skylar Hebert.

“Up front, we’re looking good,” Dugas said. “I think we’re going to be pretty good in those areas. That’s a big plus for our football team.”

So now the challenge is to get over the hump.

For the past two seasons, Thibodaux has been very good, but has been unable to climb the mountain top and ascend past Destrehan to win the District 7-5A Championship.

But with athletes, size and returnees, many think this might be the year.

Robertson said Thibodaux has two goals – to win the District Championship, then the State Championship.

Joseph agreed, but said the key is to take the entire season one game at a time.

“Take it one week at a time and go 1-0 every week,” Joseph said. “If we can do that, then everything will take care of itself.” •