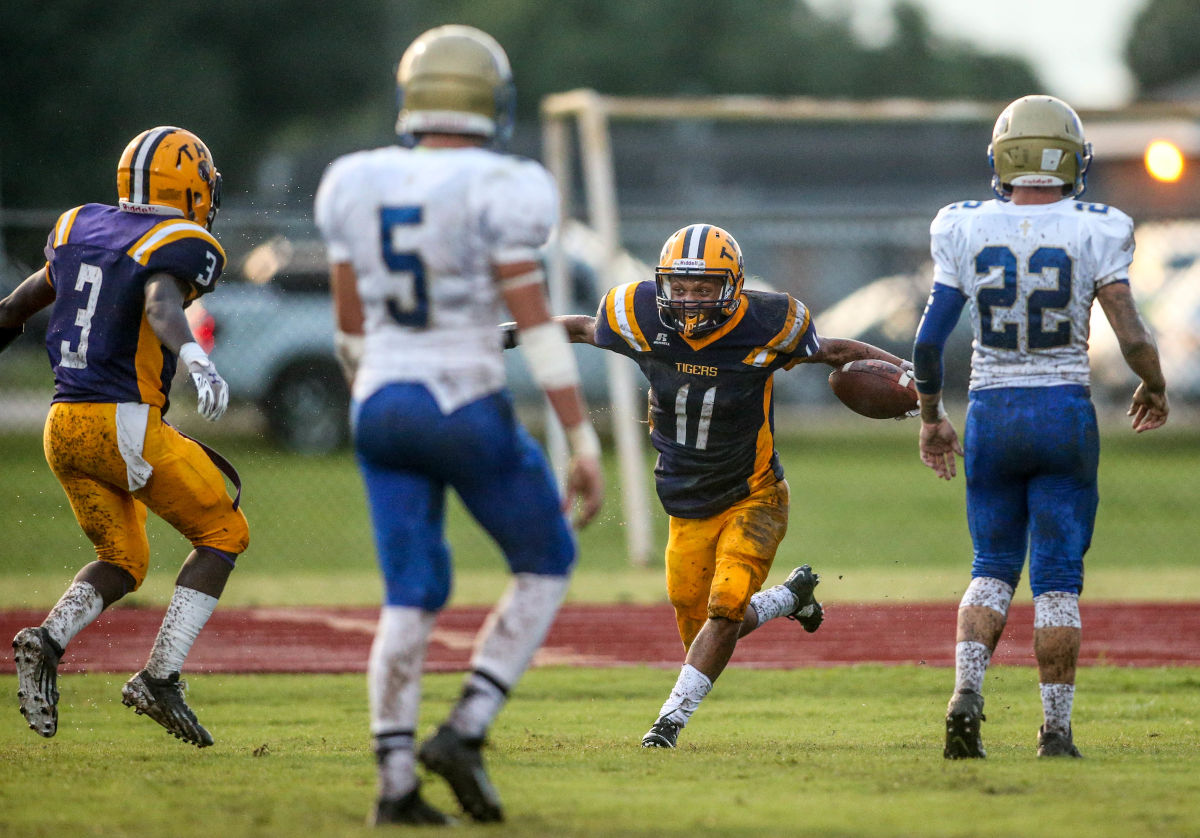 The Thibodaux High School football team lost a close, heartbreaking game in the first round of the 2013 Class 5A State Playoffs.

It’s pretty obvious that the pain of that night still sits in the guts of the Tigers’ players.

They showed on Friday night that it’ll take a whale of an effort for any team in Louisiana to make them feel that way again.

Not wanting to exit the postseason early for a second-straight year, the No. 6 Tigers dominated for 48 minutes on Friday night, shredding No. 27 Captain Shreve 56-6 to move to the second round.

With the win, the Tigers will now travel on Friday night to take on No. 22 Scotlandville, who outlasted No. 11 Ruston by a 18-14 margin in round one.

“We talked all week about how we had come up short last year,” Tigers coach Chris Dugas said. “And I think we responded really well and played a nice game against pretty good competition. I think the experience and the disappointment that we had last year really inspired the kids, because we definitely didn’t want to experience the same thing again.”

For the Tigers, senior quarterback Peyton Bonvillain was an absolute whiz on Friday night – dominating the game from start to finish.

The prolific, versatile Thibodaux quarterback struck first blood in Friday’s game, giving his team a 21-0 lead in the first quarter thanks to three-straight long touchdown runs.

Captain Shreve fought back in the early minutes of the first half, kicking home a short field goal to make the score 21-3.

But the Tigers’ high-powered offense quickly took the game right back, scoring two more times to take a 35-3 halftime lead.

He contributed to six combined touchdowns on the night.

“I’ve run out of things that I could say about him,” Dugas said. “I’ll tell you this – he’s one heck of a guy to have on your fantasy football team. The number of things that he does to help us win are invaluable. I think that with the playoffs starting, Peyton and the rest of our guys know that they have to elevate themselves and play their best football of the year in the coming weeks if we want to push ourselves as far as we think we have a shot to go.”

For the Tigers, the next step in the journey will be against Scotlandville – an 8-3 team from the Baton Rouge area.

The Hornets aren’t elite on offense, but they are incredibly stout on defense. Scotlandville has allowed 20 points or fewer in 10 of their 11 games. They’ve held opponents to single digits five times.

But when looking at common opponents, it looks like the Tigers matchup favorably with the Hornets. Both teams faced East St. John this regular season. The Wildcats topped Scotlandville 15-14 on Sept. 12, while Thibodaux trumped the Wildcats 35-21 on Oct. 24. That’s a +15 swing in Thibodaux’s favor.

Dugas said he doesn’t read too much into those sorts of things, adding that he knows his team will be in for a fight on Friday night.

“We haven’t studied them too much, but I know from looking at their scores online that they have a great-looking defense,” Dugas said. “We know that traveling over there will be difficult, as well. But that’s playoff football – every week is a grind and a challenge.”

South Terrebonne and E.D. White are the only other local prep squads still alive for a state championship in 2014.

The Gators earned their way to the second round in Class 4A after a back and forth, turnover-filled 25-22 win against Lakeshore.

But led by LSU commitment David Ducre, Lakeshore rallied back and seemed poised to steal an upset win.

Down 25-22 and driving deep into Gators’ territory, Ducre fumbled the ball, turning over possession and victory to the Gators, who ran out the clock to secure a win.

The victorious Gators will now take on No. 25 Franklin Parish in the second round.

In Division II, E.D. White didn’t need too much drama in a blowout win 31-6 win over Loyola Prep.

The Cardinals rushed the ball at ease throughout the night, overcoming an early 6-0 deficit to rally for 31-straight points over the course of the game – the Cardinals’ eighth win in 11 tries this season.

With the win, E.D. White will travel to take on Notre Dame on Friday night in Crowley.

South Lafourche fell at Ponchatoula in the Class 5A bracket, while Vandebilt lost in Division II to De La Salle.

Thibodaux High School standout Oliver Holmes (11) celebrates after catching a touchdown pass during a game this season. Holmes and the Tigers were doing lots of celebrating on Friday night when they crushed Captain Shreve in the opening round of the playoffs.