Twice as nice for Vandebilt tennis 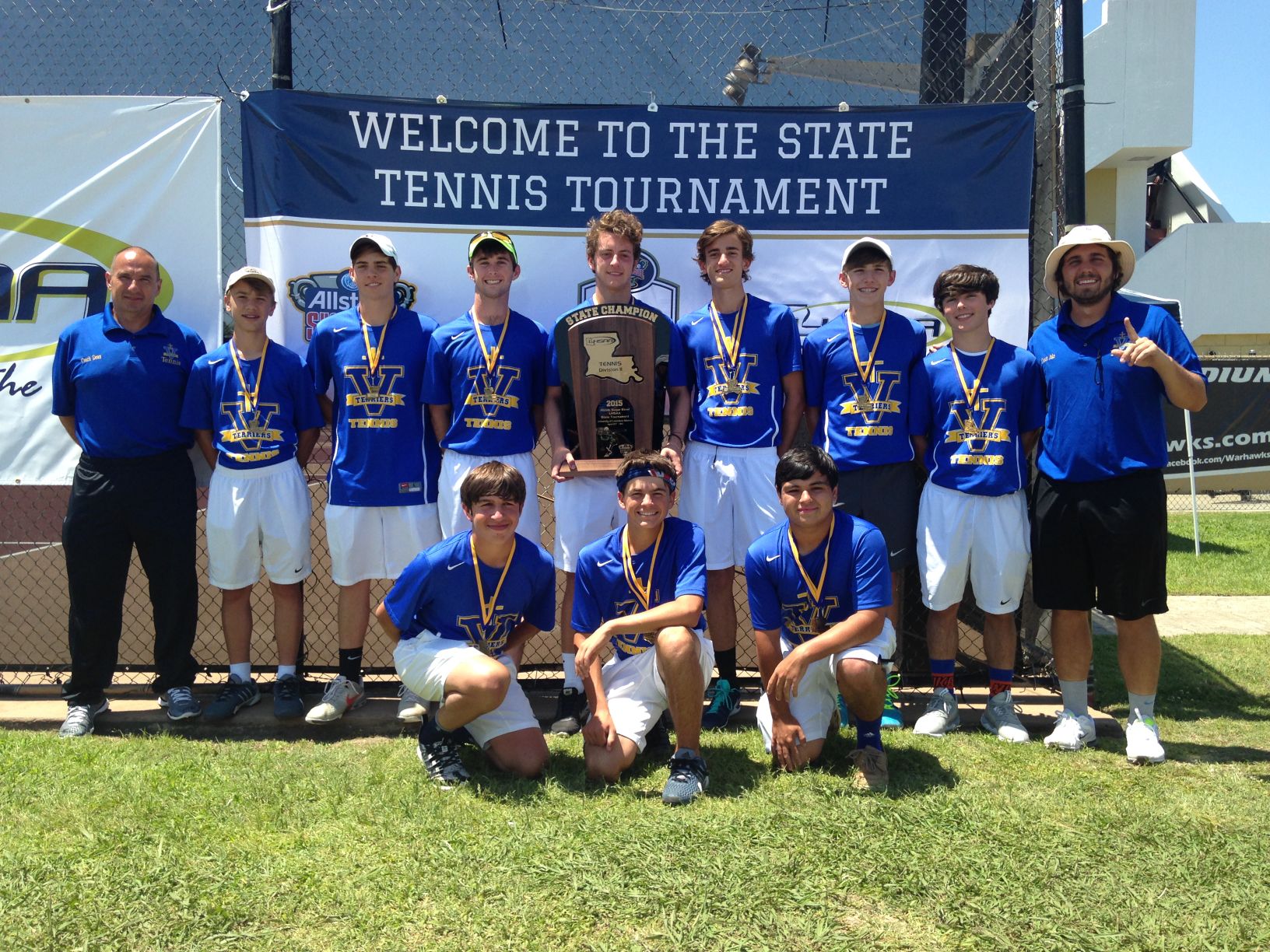 The Vandebilt Catholic boys’ tennis team did it again.

For the second-straight year, the Terriers are Division II State Champions.

Vandebilt took home the title this past week at the LHSAA Tennis State Championship Tournament in Monroe, accumulating 11 points throughout the event to clinch the top spot.

The victory will provide another trophy case for the Terriers’ tennis program that’s won many. But the feeling of state superiority never gets old, according to Vandebilt coach Jake Clements, who said he couldn’t be prouder of his team.

“I’m filled with pride from what these boys have accomplished for the second year in a row,” Clements said. “It would have been easy to become complacent or overly confident after last year. I tell people all of the time that we weren’t hungry, but we were striving for another Gold Trophy. It’s the only thought we had after the finals last year, and I know they are all ready to get back here to work on a third next year.”

For the Terriers, it was a dominant display in the doubles tournament that clinched the title.

For the second-straight year, Vandebilt secured a gold-silver finish in doubles, fielding the top two doubles teams in Division II.

Doubles team of Mason Melancon and Connor Doyle won the Doubles State Championship for the second-straight season, scoring a championship-winning victory over teammates Reese Dantin and Jacob Fournier in the finals. The match was a rematch of the 2014 Doubles Final, and it earned the Terriers much-needed points to the team title.

Clements said that even while wearing a bulls-eye after last year’s title, he knew early in the season that Vandebilt would be among the teams to beat in 2015.

The coach said that having hard workers like Melancon, Doyle, Dantin and Fournier and also Mitchell Thomas, among other competitors, make it an easy job to coach.

“I knew coming in we had a good shot at the title,” Clements said. “My group of boys love to play tennis. What most young people would gripe about as too much work, these kids love. They are a very confident group, so keeping them humble and hungry was the key.”

But at the State Tournament, there were no letdowns – just dominant performances and victories.

Melancon and Doyle won five matches en route to the title in the 32-team bracket, defeating two teams from Sam Houston and others from Caddo Magnet and St. Michaels before making it to the Championship Match.

Dantin and Fournier defeated opponents from Assumption, West Ouachita, Neville and Ruston before the last match.

Clements said the biggest challenge is the mental grind of the event, which is played over a couple days in Monroe. The coach said all throughout the season, he tests his players’ endurance so that they can be ready to play a ton of tennis in one day once the State Championships roll around.

That hard work paid off, as the Terriers were the team best able to withstand the physical tests that come with playing several matches in one day.

“Unlike other sports, these kids are expected to play three whole matches in the first day of the state tournament,” Clements said. “Physically, we prepare all year for that type of gauntlet. Mentally, it’s tough because if you win, you are expected to play again within the hour. It’s easy to have letdowns after tough matches, so I have to stay in their ears and remind them to stay focused on our tennis and what we have control of.”

This year, that recipe has equated to another state title for a Vandebilt program that has won many in its history.

And while the coach is thrilled about that accomplishment, he already has visions for more in the back of his mind.

Clements said the Terriers have a ton of talent coming back, which can allow the team to have the talent in place to chase that coveted third-straight championship title.

The coach joked that the team would practice at 5 a.m. on Monday morning to stay prepared after their Friday afternoon title victory.

But Clements said the beauty of the joke is that it’s not far from the truth.

The coach said that he knows his players will work hard throughout the summer so that they can go for the three-peat next year.

He said they’ll do that on their own – even without his command.

“We have a great group of kids here,” Clements said. “We have a group that is hard working and does whatever you ask.”

For now, the image of both he and his team hoisting the title trophy is all of the satisfaction that he and the program needs.

“The trophy is much heavier than it looks,” Clements said with a laugh. “It’s such a special moment – a culmination of everything I put them through during the season. To take the trophy and hand it to my seniors and see them walk over to the rest of my boys is very special. … Most of my players won’t play a meaningful match of tennis again once they leave high school. This is their Super Bowl, and being able to see them accomplish this goal is the highlight of my year.”

The Vandebilt boys’ tennis team poses with the LHSAA Division II Tennis State Championship Trophy. The State Tennis Tournament was held this past week in Monroe, and the Terriers used a full team effort to secure the title. Vandebilt got a doubles state championship from Mason Melancon and Connor Doyle to help win the title.