Vandebilt ‘don’t care bout nobody’ as playoffs near 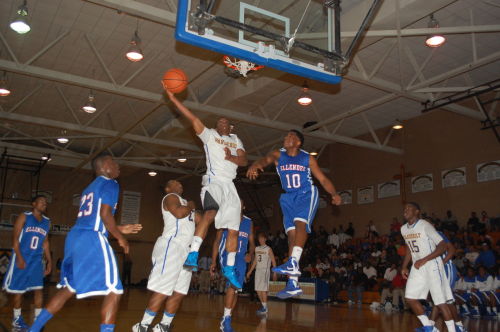 Leslie repeats his trademark phrase after almost all of his social media posts on Facebook and Instagram – a four-word quip that has started to become contagious around Vandebilt in recent weeks.

Though grammatically incorrect, it pretty accurately sums up the Terriers’ 2012-13 boys’ basketball team.

Despite being undersized, Vandebilt has again rolled through the district season unbeaten with a perfect 8-0 record.

The final win of the bunch was arguably the most memorable, as the Terriers overcame an 11-point fourth-quarter deficit to rally past rival Ellender 64-61.

Winning is something that has become common at Vandebilt.

Since Leslie and his running mate senior guard Elijah McGuire have taken over the team’s backcourt, the Terriers have been kryptonite to local opponents.

The Terriers have gone unbeaten in district play three-straight seasons.

During that stretch, they have also won every home game they’ve played.

Vandebilt coach Henry Washington is a former player at South Terrebonne who went on to play collegiate basketball.

He said his players don’t yet appreciate how difficult their feat it. The winning streak is unlike anything he can recollect in his years being around local basketball.

“It’s so hard – what they’ve done is pretty special,” Washington said. “Everybody is so close in our district so everybody knows everybody else. That makes it that much harder to win every game.

“It’s never easy. Sometimes we make it harder than it needs to be. But some kind of way, we just end up winning.”

The success has come without one prominent basketball metric – size.

The Terriers have not had a true post player in their current era of dominance.

Most of the team’s contributing players are right at 6-feet tall or shorter.

Leslie is 5-feet, 10-inches. McGuire is about the same height.

Because of the lack of size, opponents continually try to slow down the Terriers and force them to defend in the paint – a strategy that usually yields success.

When opposing teams have size, Leslie usually draws the defensive assignment – even if the player he’s guarding is six-to-10-inches taller than him on some occasions.

“If there’s a 6-(feet)-8-(inch) kid on the other team, nine times out of 10, we’re going to ask Lionheart to guard him. He knows that, too,” Washington said. “That’s not ideal, obviously, but we’re just doing what we’ve got to do.”

“It really doesn’t matter to me,” Leslie added. “It makes it a little harder and it makes me tired, obviously, but it’s what gives our team the best chance to win. This is a family here. I’ll do whatever they ask for us to get the win.”

But there’s a flip side to being small on defense – when the tables turn, an opponent’s big men have to guard Leslie, McGuire and Vandebilt’s guards, too.

Leslie and McGuire are a nightmare for opposing defenses. Each player is capable of scoring 30-plus in any given game.

Against Ellender, it was Leslie doing a lot of the heavy lifting, scoring 32 points, including several jaw-dropping drives that fascinated fans on both sides of the gym.

Ellender first-year coach Cornell Scott has seen the best of the best in Louisiana in his time on the bench.

He said Vandebilt’s duo is as good as it gets.

“I say that they are the best in the state,” Scott said. “I’ll put them up against anybody in the state with their drives and their ability to score from the outside. … Those two guys are very, very special.”

Washington agreed and said they make his job as a coach much more pleasurable.

“Having them doesn’t make it easy – no wait a minute – I guess it kind of does make it easy, doesn’t it?” Washington said with a laugh following the team’s win against Ellender. “It gives us an advantage for sure. I’ll say that.”

With the one-two punch driving and creating chaos, the Terriers’ supporting cast then becomes a factor.

Smith sank a 3-pointer with a minute to play against Ellender – a shot that capped the Terriers’ comeback and put Vandebilt on top for good.

Underclassmen like Payton Barrios, Justen Harris and Malcolm Wolfe are also capable of sinking a bucket, if needed.

“It’s not an individual thing – it’s really not,” Leslie said. “We need all of those guys. Sure, there are times where I’ve got to do what I’ve got to do and I need to take the ball and go get a bucket. But if the defense acts a certain way, I’m not afraid to pass it off.

With the district title under their belts, Vandebilt’s focus is now on the playoffs.

The Terriers have lost in the second round of the Field of 32 in each of the past two seasons.

But this year, they don’t care ‘bout nobody.

They think that will allow them to push even farther.

Vandebilt Catholic guard Lionheart Leslie contorts his body to fire a layup in traffic during Thursday night’s win against Ellender. The Terriers have rolled through district play unbeaten thanks to the team’s ability to overcome a lack of size in their front court.