Win it for Fred: EDW rallying behind monkey 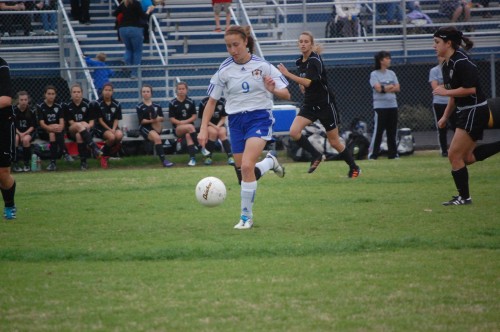 The perfect match was made.

The leading goal scorer in the history of the Lady Terriers’ storied program will get to play college ball.

Philp signed with the North Carolina-based college and said it is a “dream come true” to be able to etch her place at the next level.

“It’s relieving that I finally came to a decision,” Philp said. “It feels great that I’m accomplishing one of my biggest goals and dreams from since I was really young. That’s a terrific feeling to me. I’m so happy to be able to say I’m doing this.”

Philp’s path to Belmont started in her sophomore season – sort of.

The Lady Terriers standout said she first contacted the college via email during her 10th grade year.

“I didn’t hear anything back,” she said with a laugh.

During her senior season, Philp said she wrote Belmont Abbey again and had a little bit more luck.

“The assistant coach contacted me and was like, ‘Hey, I just got your email and I didn’t know you had contacted us before,’” Philp said. “They thought it was like crazy that I wasn’t committed to anywhere yet. I kind of got myself recruited.”

It’s not terribly difficult to see what Belmont Abbey liked about Philp.

The highlight tape and career resume speak for themselves.

With the Lady Terriers, Philp scored more than 150 career goals. Her 153rd was probably her best, as it gave her the all-time school lead.

Philp added a couple more goals after the record-setter to pad her position at the top.

The former Vandebilt goal scorer said after speaking with Lady Terriers coaches toward the back-half of this past season, Belmont Abbey thought it was “nuts” that Philp wasn’t yet committed to extend her career.

“The coach joked with me and said he was stalking me,” Philp said with a laugh. “And he kind of was. He looked at my stuff online and he called both of my coached and he talked to them a little bit. He liked what he heard about me.”

From the information stage, Philp said she took a visit to Belmont’s campus.

It was then that she really started to feel like the school was the right fit.

“I liked that it was a small school, too. I don’t know how well I’d handle 200-people classes. I just thought it’d be a better learning environment for me. The team, as a whole, was just really welcoming when I was on campus.”

The fact that Belmont Abbey needed a player that almost perfectly fits Philp’s mold helped, too, of course.

“They weren’t looking for a big, tall player,” Philp said. “They wanted a player with the body type of like Messi – someone kind of small, but really fast. A real technical player. What they liked about me was, one, they needed someone who could score goals. From watching a glimpse of me on the field, they got a sense that I could do that. … And, two, they didn’t really have anyone who was good in the air. That was another thing that thought stood out about me.”

So with graduation looming, Philp said she is entering an awkward period – a time where she has to officially realize that he Vandebilt playing days are done.

“It still hasn’t fully sunk in yet,” she said. “It probably won’t until I play my first college game, honestly.”

But the player said that she is relieved that there is a new chapter to be had in her journey.

She added that she isn’t content with just playing.

She wants to go to Belmont and have the same level of success as she did at Vandebilt. She added that Belmont has won several-consecutive conference championships – a fact that played a hand in her decision.

“It’s just reinforcement to me that the hard work that I’m putting in is paying off,” Philp said. “Even though, this is college, this is still just the first step in my goal. If I can play and win games and set records and record game-winning goals in college, then that, to me, will be a culmination of my dream. To me, it’s not about just making it to the college level, but it’s about succeeding at the college level.”

No one knows goals better locally than Philp.

If that’s what Belmont Abbey needs, they seemed to have come to the right place.

Vandebilt Catholic striker Meghan Philp pushes the ball during a game this season.