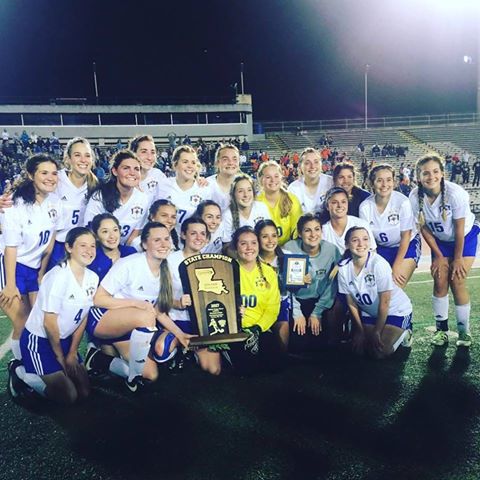 Senior striker Grace Champagne has scored so many goals in her illustrious, storied Vandebilt career that it’d be practically impossible to remember them all.

But her last at the prep level will be a goal that will follow both she and the rest of the Lady Terriers soccer community for a long, long time.

Vandebilt and Loyola played an epic Division III State Championship Match on Thursday night at Tad Gormley Stadium – a back and forth battle that went to overtime with the teams locked in a 1-all tie.

In the extra time, Champagne got free, and made history.

With just a little more than three minutes left before the end of overtime and the start of penalty kicks, she wiggled through the defense and into the box. Once there, she swung her powerful leg and drilled the ball into the back of the net to give the Lady Terriers a huge, go-ahead goal.

Once the ball was put back in play, the Lady Terriers’ defense stiffened until the final whistle, sealing a thrilling 2-1 victory and the state championship for Vandebilt.

The victory is the fourth state title for the Terriers and the second-straight for the storied, talent-rich soccer program.

Coach Phil Amedee said he couldn’t be prouder of Champagne, his other seniors and the team as a whole for winning the big game.

“I couldn’t be any prouder of the kids,” Amedee said. “We were challenged today. We had some opportunities that we missed, and at the end of it, we got the big play that we needed to win it. Every phase deserves credit. It was a total team effort and a great team win.”

It was a great match, too.

Loyola showed no fear of Vandebilt, despite falling to the Lady Terriers in both the 2016 Playoffs and also in an early-season match in November – both 2-0 shutouts.

Much like they did against E.D. White in the State Semifinals, Vandebilt scored in the opening seconds of the match – a long-range shot from Molly Thompson, which sailed high in the air, but dropped down in time to find the back of the net, sending the crowd into a frenzy at the Lady Terriers’ early advantage.

But then Loyola’s defense stiffened, which made the game close throughout.

Vandebilt had several chances in the first half after Thompson’s opening goal, but nothing could win the net – in part because of Loyola’s tough back-line defense, but also because of the dominant play of goalie Mary Kathryn Smith, who recorded countless big saves throughout the match to keep the Lady Terriers off the scoreboard.

Before halftime, Loyola got an equalizer – a gorgeous free kick from Shannon Anderson, which tied the match at 1 at halftime.

Amedee said he told his players during the break that they needed to calm down and avoid frustration. He said he didn’t want his team to get down on itself, despite some missed chances.

“Sometimes in soccer, that’s just how it goes,” Amedee said. “I just wanted them to keep playing. I wanted them to know and believe that if we just kept executing, something good was going to happen for us and we were going to get where we wanted to get and the result we expected.”

Vandebilt obeyed its coach and stayed sharp, controlling possession in the second half, rocketing several shots into the Loyola defense.

But none found the back of the net, which kept fans on the edges of their seats throughout the duration.

Champagne was one of the main culprits in the late-match pressure. She nearly scored several times in the second half, but was thwarted by saves or deflections, which helped to send the match to overtime still tied at 1.

But in the extra frame, her final shot didn’t get blocked, but instead sailed into Vandebilt Catholic soccer history.

Champagne was named the Most Outstanding Player in the match.

The victory marked the second-straight state title for the Lady Terriers and the final game in the storied career of an eight-player senior class – many of whom have been seeing significant playing time for three or four seasons.

“Those seniors will be missed,” Amedee said. “On the field, of course, they will be missed. But they are all great locker room leaders, too. They have done a great job in their careers advancing our program, and they all deserved to go out with a win in their final game and another state championship.”

Amedee said he’s already looking forward to next season and learning what his new leaders can do with their time to shine.

He said regardless of youth, he doesn’t expect Vandebilt to take a step back – not even a little bit.

“Here, we expect to compete in big matches against the best competition,” Amedee said. “We’re losing a good group, but we’ve played a lot of younger players in the past few years, and we’re confident in them as this current group of seniors leaves the program.”