Volunteerism of youth sports officials is second to none

Nicholls working to keep injury bug away in 2012 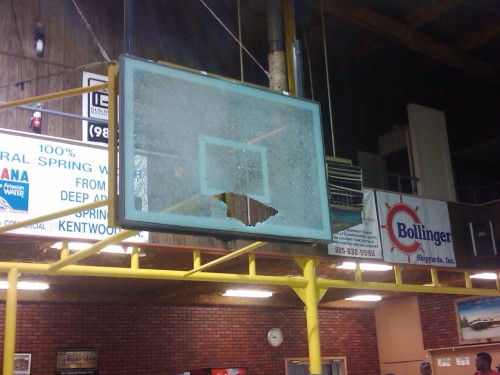 People always ask me why I choose to live in small-town Louisiana over the excitement of big-city sports media.

For the longest time, I never really knew an adequate rebuttal to their inquiries, so I’d give a generic answer with no significant meaning.

I finally got my definitive answer last weekend at the South Lafourche Biddy Summer Classic.

And it all started when a young man threw down a one-handed slam-dunk in the opening minutes of a preliminary round game.

OK, I know you’re a bit confused at this point, so allow me to paint the full picture.

The South Lafourche Biddy Summer Classic is an annual open basketball tournament designed to raise money for the kids who play within the youth organization.

This past weekend’s event marked the third-straight year the tournament was held.

So far, the fundraiser has been a pretty big hit and teams from across the Tri-parishes come and spend the weekend in Cut Off to play some 5-on-5 basketball with old friends and rivals.

At $250 per team and 10 or so teams per year, it can very comfortably be said that the event has pumped several thousands of dollars into the local youth sports organization – a huge help in today’s tough economic climate.

This past weekend’s event was going to be the biggest one yet.

With 11 teams signed up and multiple sponsors on board, everyone was ready for a full-fledged weekend of philanthropic fun.

But in the opening minutes of the fourth game, things changed.

After receiving an outlet pass from a teammate, a player broke free from the defense and was now 1-on-1 with the basket.

He rose up, glided through the air and slammed home a fierce, one-handed slam-dunk.

Upon impact with the goal, the rim came undone from the backboard and the glass from the basket exploded – shattering in pieces all over the Cut Off Youth Center’s floor.

In my 20-plus years of watching hoops, I have never seen anything like it in my life. It was amazing to see a backboard shatter in person.

With glass all over the court and only one usable goal on the floor, the weekend of fun was now struggling for air.

How would the floor get cleaned up?

With the bulky pipe frame of the old basket still in place, where would a second goal fit to allow play to resume?

If unable to continue, what would happen to the team’s $250 entry fees?

It was then that our community’s spirit shined bright and a group of unsung heroes showed me why I live in south Louisiana.

Volunteers from various walks of life worked into the early morning hours Saturday morning to get the Cut Off Youth Center’s gym back into playing condition.

They used their own equipment, time and resources to take down the old basket’s frame – a tall task – and to then move a second basket where the old one used to be.

They did so without complaint, nor thought – it was sort of like a second nature to them.

No one expected a pat on the back for their efforts and no one expected financial compensation for a hard night’s work – it was all done for a cause.

And that cause was the betterment of the community.

That is something that you just don’t see in very many parts of the country.

But you do see tons of it in south Louisiana.

After grinding in the gym until early morning to fix the basketball goal, the same volunteers sacrificed sleep to return to the gym at 7 a.m. the following Saturday morning so play could resume and the event could be completed without a hitch.

With 11 teams vying for bragging rights, competitive edge thrust a lot of games on Saturday into overtime.

But for an event organizer or volunteer, overtime means delays and more time in the gym.

The South Lafourche Biddy Summer Classic did not end until close to 11 p.m. on Saturday night.

For those taking score at home, that means those involved logged more than 20 hours in two days with little-to-no sleep.

Imagine being the referees who had to jog up and down the floor for 16 hours without a break.

But everyone involved did their part with a smile.

Because it’s not about personal fulfillment to these people – it’s about seeing others have fun and bettering the living conditions for those within our area.

I’d like to preface by saying that I see the way South Lafourche Biddy operates first-hand, as I am a coach within the organization.

But their stories of sacrifice and volunteerism are just one example of many similar stories within the area.

TPR is full of amazing people who would do anything in their power for children as they become introduced to sports.

Likewise, other youth organizations in Lafourche and St. Mary are the same.

We are blessed with a wealth of generous and good-spirited people – you all know who you are.

These people are truly the real heroes within our country.

Their dedication to helping others is amazing and it’s not unnoticed.

Stories like the one told above are why I love living in South Louisiana.

They all are why this place is the greatest place to live in the world.

Thank you all for your sacrifices.

When a one-handed slam dunk shattered the backboard on the Cut Off Youth Center’s permanent basketball goal, tournament organizers had to scramble to keep the event alive. With determination and the volunteer work of many community members, the goal was taken down and replaced and the event went on without a hitch – a feat that caught Sports Editor Casey Gisclair’s eyes.