The Times Player of the Week – Evan Louviere 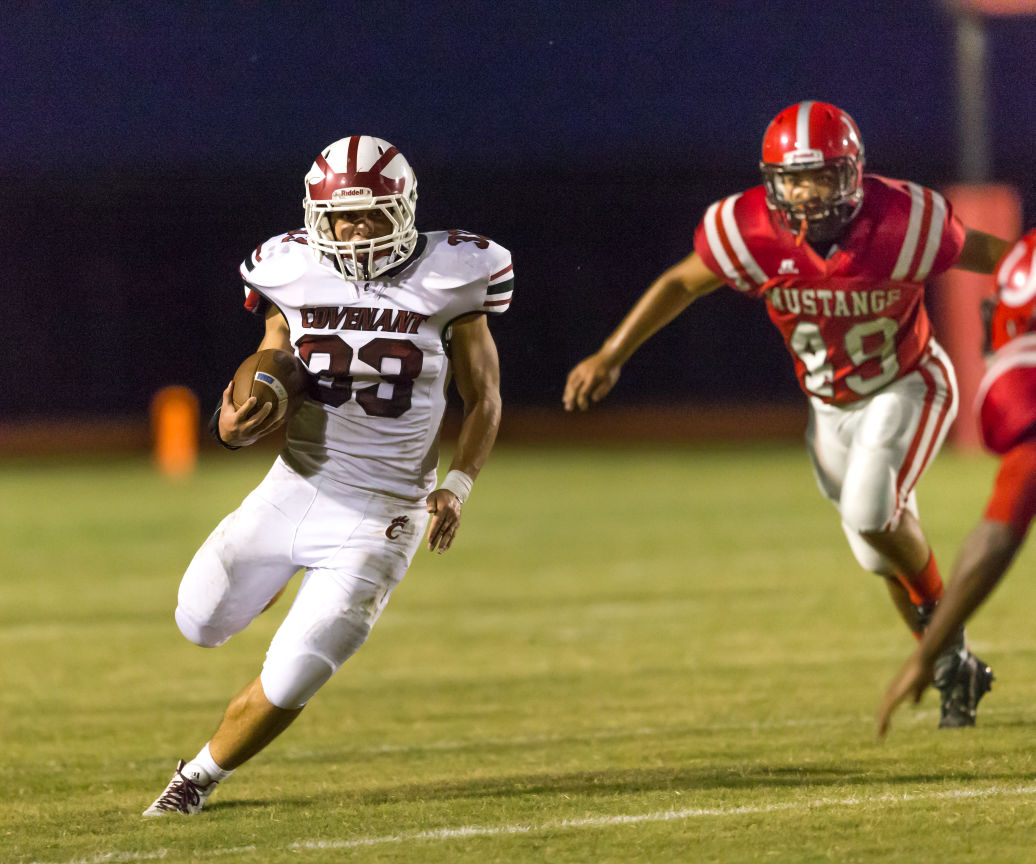 the Trojans roll to 1-0 in district play with 28-unanswered in second half. Second-straight 3-1 start for Central Lafourche.

Terrebonne falls to 2-2 against dominant Destrehan team that stays unbeaten and looks like the clear favorite to win the Bayou District through the earliest stages of the season.

Patriots score first victory of 2014 season in shootout thriller with St. Helena Central. Patriots will look to stay on point in Friday night’s district opener, a road date with Assumption.

For seond-straight season, Lumberjacks use spread offense to overwhelm Terriers’ defense. Vandebilt is winless, falling to 0-4 in the non-district defeat.

Cardinals’ perfect start to 2014 ends at the hands of Class 2A powerhouse. E.D. White will again be stiffly tested on Friday night – a road meeting at Shaw.

Battaglia brothers team up for more than 100 yards through the air to power the Warriors to a second-straight victory. Timely defense limited Ecole Classique.

By The Numbers for Week 4 of the Prep Football Season

30: With just 30 seconds to play in Friday night’s thriller between Thibodaux and Hahnville, the score was 19-16 in Thibodaux’s favor. With Hahnvile driving and seeking a game-tying field goal, kicker Dalton Melancon’s last-second effort dinged off the upright to preserve Thibodaux’s win.

177: The number of passing yards Houma Christian’s brother duo of quarterback Drake Battaglia and receiver Devin Battaglia connected for in Friday night’s blowout win. Drake had 277 passing yards and four touchdowns in the win, completing 13-of-18 passes. Four of those completions came to his brother, who hauled in 177 yards and a touchdown.

65: Entering Friday night’s game with South Terrebonne, Belle Chasse quarterback Andrew Hicks was the leading rusher in the entire state of Louisiana with more than 800 yards and 10 touchdowns. But thanks to a dominant defensive effort from the Gators’ front, South Terrebonne slowed Hicks to a halt, limiting him to 65 yards on 19 carries in a dominant blowout win.

28: Down 14-0 at halftime against a fired up H.L. Bourgeois squad celebrating its homecoming festivities, the Central Lafourche football team had nowhere to go but up. The Trojans responded to the adversity in style, ripping off 28-straight points in the second half, including 21 in the fourth quarter to secure a 28-14 win. With the victory, the Trojans are now 3-1 in the young season and 1-0 in district play.

115: The Vandebilt Catholic defense started the season OK under first-year coach Jeremy Atwell, limiting E.D. White’s veer offense to just 21 points in a close loss. But since then, the Terriers have had a whale of a time keeping opponents out of the end zone, allowing 115 total points in the past three weeks of the season. The good news for Vandebilt is every game so far in 2014 has been on the road. The Terriers finally play a home tilt on Friday. The bad news? It’s against unbeaten Brother Martin – a Class 5A power.

1. Thibodaux: There’s absolutely no doubt in my mind that the Tigers are the top dogs on the local prep scene after Friday night’s road win at Hahnville – a team that beat Landry-Walker this season and pushed Rummel to triple overtime. Winning on the road in the Bayou District is never easy. Doing it at Hahnville is even more difficult. Kudos to coach Chris Dugas. You, sir, have a nice squad!

2. South Terrebonne: If Thibodaux is our area’s 1A, then South Terrebonne will be 1B – a fearsome foe in the public side of the Class 4A playoff bracket once postseason play rolls around. The Gators’ offense isn’t flashy, but it surely is effective. This coming weekend’s battle versus Warren Easton will be a huge test to determine just how elite the Gators really are.

3. Central Lafourche: After the top two teams, there is a massive drop off in talent among our area’s team. As of right now, the best team in the “next tier” has to be Central Lafourche, who rolled to 3-1 on the season with a win against H.L. Bourgeois. The Trojans will be tested quite swiftly in Week 5 – a home battle with East St. John, one of the most athletic teams in Louisiana.

4. E.D. White: The Cardinals drop to the No. 4 spot in this week’s rankings after taking one on the chin against Catholic of New Iberia. This coming Friday night will be a very interesting test, as the Cardinals will face Shaw, which boasts one of the most dominant running attacks in the New Orleans area. The outcome of that game will tell us a lot about how elite the Cardinals truly are.

5. Terrebonne: The Tigers round out our list of five schools after losing handily against Destrehan to open district play. If Terrebonne is going to make the Class 5A playoffs, it is absolutely, positively imperative that they beat South Lafourche on Friday night. With the rest of their schedule stiffening greatly in the coming weeks, that is a must-win.

Week 4 Players of the Week

Bronze: Ellender quarterback Curtis Anderson – It was a long and tough week for the Ellender Patriots, who lost one of their own when 14-year-old Cameron Tillman was shot and killed earlier in the week. But the Patriots rallied through adversity and shined, scoring their first win of the season. Anderson was a huge culprit in the effort, tossing a touchdown pass and recording an interception.

Silver: Central Lafourche halfback Thomas Wesley – Down 14 points in the second half of the Trojans’ district opener, Wesley decided that it was time to shine. The elusive and dominant Trojans halfback rushed for 124 yards on 22 carries, helping power Central Lafourche to 28-straight second half points and a win.

Gold: The Battaglia Brothers – Friday nights must be an extremely stressful time for Warriors’ coach Chuck Battaglia. In addition to his gameday duties and responsibilities, the Houma Christian coach also has to be a father on the field, watching his sons Drake and Devin go to battle. This past Friday night was one of the best nights yet for the quarterback-receiver connection, as Drake passed for close to 300 yards and Devin hauled in four passes for 177 yards with a score.

CCA halfback Devyn Allen carries the football down the field during a game against Assumption. The Lions fell to Assumption, but will begin district play on Friday night.