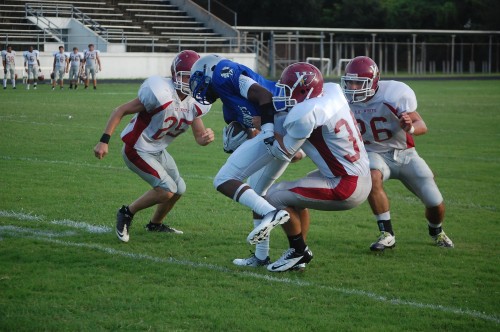 Prep Football Week 4 by the Numbers

128: The total number of points Ellender has scored in its past two games – both wins. Once an annual bottom-tier team, the Patriots are now 3-1 on the season.

397: The number of rushing yards Central Lafourche was able to accumulate in Friday’s win against H.L. Bourgeois. The victory moves the team to 1-0 in Bayou District play.

35: With revenge on their mind, South Lafourche avenged last season’s close loss to Helen Cox thanks to a 35-point first quarter.

Week 4 players of the week:

South Lafourche receiver Zaron Jenkins – Everything the Tarpon receiver touched turned to gold Friday night against Helen Cox. Jenkins caught three passes for 90 yards – all of the catches were for touchdowns.

Ellender quarterback Dustin Creppel – I really try hard to avoid naming someone as our gold medal player two weeks in a row. But we’d flat-out lose integrity if we kept Creppel off the list this week. The Ellender quarterback tossed for 408 yards and six touchdowns in just more than three quarters of action against Albany.

The Power 6 (Ranking the top six teams in the area, according to Sports Editor Casey Gisclair)

2. E.D. White – The Cardinals didn’t play their best game Friday but survived to remain unbeaten. Truly, the only thing allowing them to keep their No. 2 spot right now is the fact that they defeated the No. 3 team head-to-head.

3. Vandebilt – The Terriers have really come a long way since their Week 1 loss to the Cardinals. The fact that Vandebilt scored a blowout without a huge night from all-everything quarterback Elijah McGuire is a reason for optimism.

4. Ellender – Ellender’s not a fluke, folks. These guys can score the football on anyone. After another 60-point effort, I am now officially a believer that these guys will contend for a spot in the top 6 all season.

5. Morgan City – The Tigers continue to quietly plod along with an unbeaten record. For the second-straight season, coach Brandon Nowlin is doing a masterful job with this team.

6. Terrebonne – The Tigers are one of the most difficult teams to forecast in all of Louisiana. One week they look awful and lose handily to Ellender at home. Another week, they play a solid game and demolish Westgate on the road.

Quote of the Week

“Now, we just know how to win a little bit.”

Ellender coach Terry Washington when asked the difference between his team today compared to his team at the start of the 2012 season.

The E.D. White defense swarms to the football during a scrimmage against H.L. Bourgeois. The Cardinals have used their powerful defense to remain unbeaten – one of a handful of local teams yet to suffer a loss this season.