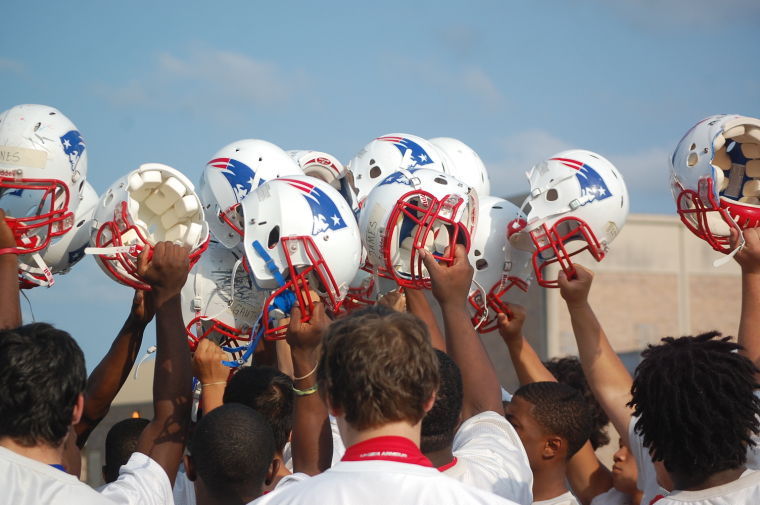 This game had everything. It had offense, emotion and tons of drama. When it was all said and done, the Trojans walked away with the win, taking advantage of four Tarpons turnovers to secure the victory. The Trojans now begin league play on Friday night against H.L. Bourgeois.

The Wildcats are back, folks. After a very down season in 2015, East St. John is again among the favorites in the Bayou District – a perch the team enjoyed for many, many seasons in their heyday. For the Braves, offense has been incredibly inconsistent after scoring 45 points on opening night against South Terrebonne.

Terrebonne started slow on Friday night and never recovered, falling to the now-3-1 Thibodaux team. Amik Robertson was absolutely fantastic in the victory, scoring in a laundry list of ways to power Thibodaux, which now heads into a huge battle with East St. John.

Ellender can play, folks. Beating Patterson is never an easy chore – especially not on the road. The Patriots’ defense is much, much better than it’s been in years past, and the end result is a 3-1 start that has the team hopeful of a postseason push.

The Gators have to get back to the offensive basics after going a fourth-straight game without scoring an offensive touchdown. South Terrebonne is a well-coached team. We suspect that they’ll be pushing forward here pretty soon. But the beginning to this season has been nothing short of a nightmare.

It was always going to be an uphill battle for CCA against Vandebilt – a much bigger school. But without Caleb Seitz, the Lions didn’t offer much resistance, falling behind early in a huge Terriers win. Vandebilt now is positioned for a Week 5 battle with Newman – a significant power in Class 2A.

Kaplan is a good football team, and E.D. White pushed those guys for the entire game. But the Cardinals just didn’t quite have the firepower to get the victory it needed. E.D. White’s schedule is about to lighten up a tad, and we suspect they’ll find the winner’s circle as it does.

The Warriors stepped up in class and played a Class 4A foe on Friday night on the road. One wouldn’t have hardly been able to tell. Houma Christian pushed Ben Franklin to the limit for the entire game before falling by just a single point – one of the top games of the night.

Players of the Week – Week 4

Bronze: South Lafourche receiver Damarcus Caine – Caine took the top off Central Lafourche’s defense twice on Friday night, catching two touchdown passes of 50 yards or more in the shootout defeat at the hands of the Trojans. Caine is a playmaker. He will be heard from a lot as the season rolls on.

Silver: Thibodaux athlete Amik Robertson – Let’s be honest. We could give Robertson the gold medal literally every, single week. He was awfully deserving again on Friday night, scoring touchdowns in a variety of ways to help Thibodaux open district play with a victory over Terrebonne.

Gold: Central Lafourche quarterback Jake Allemand – Statistically, other players may have done more than Allemand on Friday, but the kid was just sharp as a nail in a huge rivalry win. Allemand’s poise under center for the Trojans is a huge asset. He’s a very, very good football player.

1. Central Lafourche – The Trojans have some defensive holes that need to be corrected in a hurry. Heck, they allowed more than 500 yards of total offense on Friday night. But the team has weapons galore and a quarterback that knows how to get the ball to them in space. You can’t ask for much more.

2. Vandebilt – Last year, CCA shell-shocked Vandebilt and the game was a dog-fight in the second half. Not this year. Vandebilt broke down the overmatched Lions, and scored an easy win, which sets the stage for the Terriers to battle Newman on Friday night.

3. Thibodaux – The Tigers started hot and rolled on Friday, earning a big victory over Terrebonne. Friday’s game will be a good litmus test for the Thibodaux team. East St. John is awfully good. It will be a battle to see how Thibodaux matches the Wildcats’ athleticism.

5. South Lafourche – I hear people calling me a homer from a mile away. Yes, I put South Lafourche in the No. 5 spot, despite a 1-3 record. The Tarpons have lost to Carver (4-0), Thibodaux (3-1) and Central Lafourche (4-0) – all by just a combined 17 points. The schedule will lighten up and the results will change. Besides, the area is awfully top-heavy with E.D. White and South Terrebonne struggling. There aren’t many options.

Week 4 By The Numbers

62 – Central Lafourche quarterback Jake Allemand had just 22 rushing yards for the season coming into Friday’s matchup with South Lafourche. He has an awful lot more than that now after recording 62 against the Tarpons, including several big-time scampers on third down.

$5,000-6,000 – Ellender coach David McCormick estimated that his football team lost somewhere between $5,000 and $6,000 of ticket gate revenue by having to move Friday’s home-scheduled game from South Terrebonne High School to Patterson. McCormick said the loss in revenue was well worth it, though, because he was scared that someone would get hurt on the field.

4 – CCA’s offense had been pretty good early in the season against like-sized competition. But on Friday night against Class 4A power Vandebilt, the Lions were only able to muster four first downs, allowing the Terriers to roll to an easy victory.

1 – With Terrebonne and CCA’s losses in Week 4, we are down to just one local unbeaten – the Central Lafourche Trojans. We have two winless teams in the area – E.D. White and South Terrebonne.